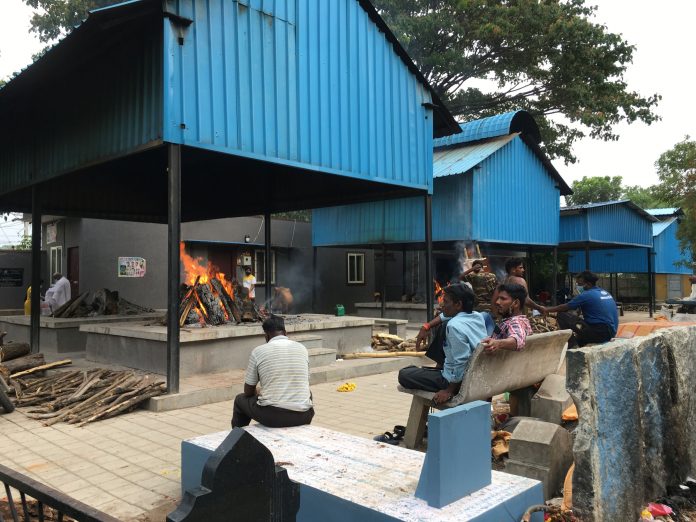 Some workers face the anger of the general public when they take up a work on priority, at times forced by legislators and corporators.

Amid an unrelenting second COVID wave in Karnataka, crematorium workers in Bengaluru have to cope up with irregular salary payout and the absence of basic amenities in burial grounds and cremation centres.

Some of the workers have to endure the anger of public when they take up work on priority, at times forced by legislators and corporators. Despite working nearly 16-18 hours a day at a stretch over the past month burning nearly 30-40 bodies a day, many have not been tested for COVID nor have they been vaccinated, says a report by the All India Central Council of Trade Unions (AICCTU).

This is despite the fact that the Karnataka government has recognized them as frontline workers and the High Court has directed the state to carry out vaccination on priority for frontline workers.

“My family members have been doing this work for decades. We live within the burial ground and we have a home. But we do not have a ration card as the food inspector does not want to visit the crematorium to verify,” says Souri Raja, a worker at the Kalpalli crematorium in Bengaluru.

He says some workers in other burial grounds have ration cards based on their family members’ address of a different area. “But I live here and the government should recognize it. Even in my Aadhaar, they have not mentioned the complete address,” he said.

Some of the workers have received wages in an arbitrary manner — sometimes once in three-six months, and at times even once a year, the report said.

“We found that workers are not paid the minimum wages nor given any statutory or constitutional benefits extended to a worker,” it said. In some crematoriums, they were considered ‘caretakers’ and paid ₹ 1,000-₹ 2000 a month.

A three-member team of AICCTU visited 26 crematoriums and burial grounds across Bengaluru city, including those under the civic body Bruhat Bengaluru Mahanagara Palike, temporary crematoriums set up during the second wave and those run by private trusts.

“None of the workers we spoke to was aware of the wage structure and neither were they aware of the deductions made. They are not given wage slips,” the report said. “One worker at Kalpalli Crematorium said the workers are paid a lump-sum each year as wages due to them.”

Also read: Delhi in distress: Cremations swell by day but no firewood for pyre

Though the notified wage is about ₹ 14,000 per month, many of them have reported having received only ₹ 10,500 a month. They say they have not been given ESI health cards or PF numbers. Some of them make a living from the money given by the relatives of the deceased who come to perform the last rights.

Chandrakumar B, 28, working in Kudlu crematorium for the past eight years, says beyond the concern of salaries, it’s the influence factor from local corporators and MLAs that worried him. “Local MLAs and corporators call us and ask us to prioritize the burning of bodies based on their recommendation. But when we have a queue system in place, it’s difficult to follow such orders as it hinders our work,” says Chandrakumar.

He says he does not wish to get into an argument with people as they barely get 5-10 minutes to bid goodbye to their dead ones. Raja says this practice of political interference is rampant across crematoriums in the city.

R Mohan Raja of Dalit Sangarsha Samithi says most of these workers come from a certain caste that was once considered “untouchable”. The government should recognize their work and should consider them under Group-D workers in the government job category.

With existing crematoriums under pressure following COVID deaths, the Karnataka government in April allocated nearly 200 acres of land for additional seven crematoriums on the outskirts of the city — all dedicated to COVID deaths.

At several cremation centres, the workers were promised ₹ 1,200 incentive for every COVID body they cremated. But the government has not yet kept its promise and workers are not sure if that would be honoured anytime soon.

Raja says in the first wave, the cremation workload increased to burning 14-15 bodies a day and went up to 22 bodies during the peak time. In the second wave, it increased to a daily average of 38-40 bodies.

This led to work overload as workers got busy 16-18 hours daily. With ambulances queuing up in front of the cremation grounds, it further added pressure on them. Raja says recently these workers were given freezer boxes which can store up to 10 bodies, the backlog which they continue for the next day.

The report also highlighted how some of the workers in mass cremation centres wore PPEs sporadically, and only when they had to place the body of the deceased persons on the firewood. Besides, many crematoriums did not have toilets.

“The workers’ living conditions are abysmal, and expose them to a higher risk of COVID,” said the report.

The National Human Rights Commission on May 14 issued an advisory on dignified ways to dispose of the dead, saying the staff handling dead bodies should be adequately protected. They should also be paid fairly and given vaccination on a priority keeping in view the risk they were exposed to.

“We ensure a dignified funeral for all. But we too have our own dignity. We have been protesting since 2012 for a rise in wages, but our requests have fallen on deaf ears,” said Raja.