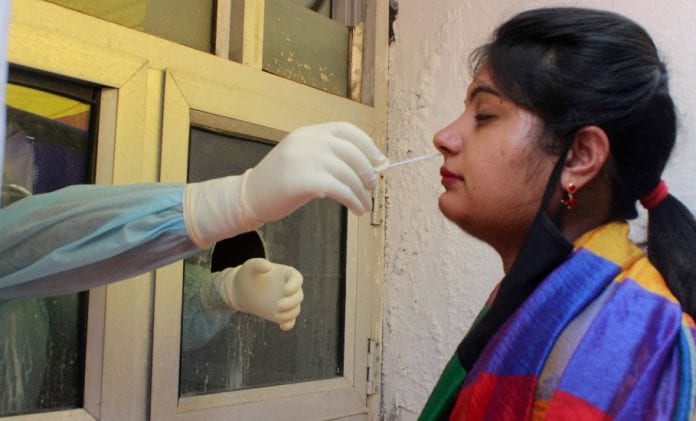 The numbers stood at 6,48,315 total cases and 18,655 deaths in the morning, according to the Union health ministry’s 8 am updated on Saturday. Friday was the second consecutive day to witness a rise of more than 20,000 cases in a single day.

As per the Indian Council of Medical Research (ICMR), a cumulative total of 95,40,132 samples have been tested up to July 3 with 2,42,383 samples being tested on Friday. The efforts to expand the testing labs network in the country have led to their numbers increasing every day. Currently, there are as many as 1,087 labs in the country.

Meanwhile, as experts cautioned against rushing the process for developing a coronavirus vaccine after the ICMR stated it plans to launch one by August 15, the apex health research body stressed that it is acting in accordance with the globally accepted norms to fast-track vaccine development for diseases of pandemic potential.

The ICMR said that the letter by Director General of ICMR Dr Balram Bhargava to principal investigators of the clinical trial sites was meant to cut unnecessary red tape, without bypassing any necessary process, and speed up recruitment of participants.

The COVID-19 reports from the worst-affected states are as follows:

Maharashtra’s case count on Saturday rose to 2,00,064 with a record single-day spike in patients of 7,074. With 295 deaths, the death toll due to the pandemic in the state rose to 8,671, said the health department.

For the third consecutive day, Tamil Nadu on Saturday reported over 4,000 new coronavirus
cases and the tally touched 1.07 lakh cases. As many as 65 patients died and the toll stood at 1,450, the bulletin said. Those dead include 59 with co-morbidities and six with none.

While 2,214 patients got discharged today, 60,592 patients have recovered so far and the active cases were 44,956. Of the 4,280 fresh cases, Chennai accounted for 1,842 and the remainder was spread across the state including 350 in Madurai.

The national capital recorded 2,505 fresh cases on Friday, taking the tally in the city to over 97,000, while the death toll from the disease mounted to 3,004, authorities said. Fifty-five fatalities have been recorded in the last 24 hours, said a Delhi health department bulletin.

It also said that 26 earlier deaths have been included in the cumulative figure. The bulletin said the death toll from the infection has risen to 3,004, and the total cases rose to 97,200.
The death toll from COVID-19 in Delhi stood at 2,923 on Friday.

Gujarat reported its highest single-day spike of 712 cases today which took the number of cases in the state to 35,398, the health department said. Death toll due to the virus rose to 1,927 with 21 new fatalities, it added. For the first time, one-day rise in number of patients
crossed 700 in the state.

A total of 473 patients were discharged from hospitals following treatment, taking the total number of recovered cases to 25,414. There are now 8,057 active cases in the state with 68 patients on ventilator, the health department said.

The death toll due to COVID-19 in Uttar Pradesh reached 773 on Saturday with 24 more fatalities, while the total number of cases in the state mounted to 26,554 as 757 fresh infections were reported in the last 24 hours, an official said.

Additional Chief Secretary (Medical and Health) Amit Mohan Prasad said there are 7,627 active cases in the state. So far, 18,154 people have been discharged from hospitals after recovering from the disease. The state has a recovery rate of 68.36 per cent, he said.

Telangana continued to witness a spike in COVID-19 cases on Saturday, with as many as 1,850 new cases and five deaths being reported, taking the infection count in the state to 22,312 and toll to 288. Out of the 1,850 fresh cases, 1,572 were reported from the Greater Hyderabad Municipal Corporation (GHMC).

A state government bulletin said 11,537 people have been discharged so far, while 10,487 were under treatment. According to the bulletin, 6,427 samples were tested on Saturday. Cumulatively, 1,10,545 samples have been tested.

Karnataka reported its biggest single day spike of 1,839 new COVID-19 cases today and 42 related fatalities, taking the total number of infections in the state to 21,549 and the death toll to 335, the health department said. The day also saw 439 patients getting discharged after recovery; even as 226 patients in the state were undergoing treatment in ICU.

Out of 1,839 fresh cases, 1,172 cases were from Bengaluru Urban alone; while 24 of the 42 deaths were from the capital city. As of July 4 evening, cumulatively 21,549 COVID-19 positive cases have been confirmed in the state, which includes 335 deaths and 9,244 discharges, the health department said in its bulletin.

West Bengal registered twin records of the highest single-day surge in COVID-19 fatalities and cases today, as 19 people succumbed to the disease and 743 more tested positive for the virus, the state health department said.

The death toll mounted to 736, while the tally shot up to 21,231, a bulletin released by the department said. The number of active cases stood at 6,329, it said. Since Friday, 595 patients have been discharged, taking the number of cured patients to 14,166. A record 11,018 samples have been tested in the state during the period, the bulletin added.