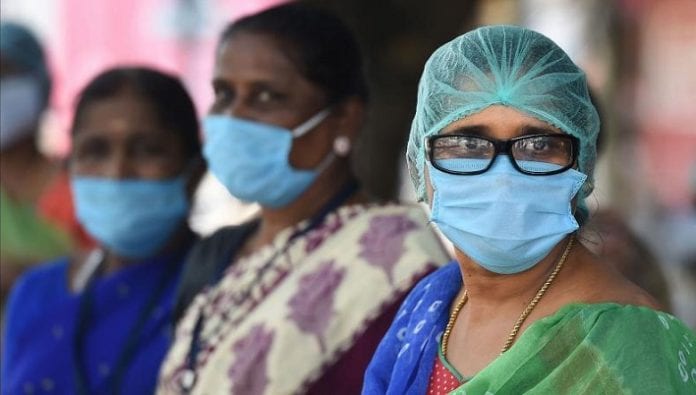 Chennai’s new cases dropped on May 13 after 30 days. File Photo

The number of people turning COVID positive and the positivity rate in Chennai city declined significantly on Thursday (May 13), according to data released by the state health department as well as Chennai Corporation.

Experts consider the decline to be a silver lining, but warn that it’s too early to decide whether the city has reached the peak in the second wave.

“Chennai’s new cases dropped on Thursday (May 13) after 30 days. Testing at 30,954 has not reduced. The total positivity rate is 22.6%, which is a good sign, but does this meaning we have reached the peak? Not yet, as the trend is still upward. Following the lockdown protocol will help to continue the downward trend,” said COVID data analyst Vijayanand.

The lowering of positivity rate must be good news for frontline workers as well as Chennai Corporation who are struggling to find beds for the needy patients.

Also read: Tamil Nadu under COVID stress as May records over 2,400 deaths

“It is too early to comment on the decline in the positivity rate in the city. We need to watch for a few more days or weeks before commenting,” said Chennai Corporation commissioner Gagandeep Singh Bedi.

He said last year the country did not have the vaccine. “We had only masks and social distancing as well as sanitizers. This year, we have two vaccines and the best way to prevent being infected is to take two doses of the jab,” said a health department official.

Vijayanand hopes that the number of positive cases will come down soon. “We need to watch for a few more days and if the positivity rate declines, then it is good for the city,” he said.