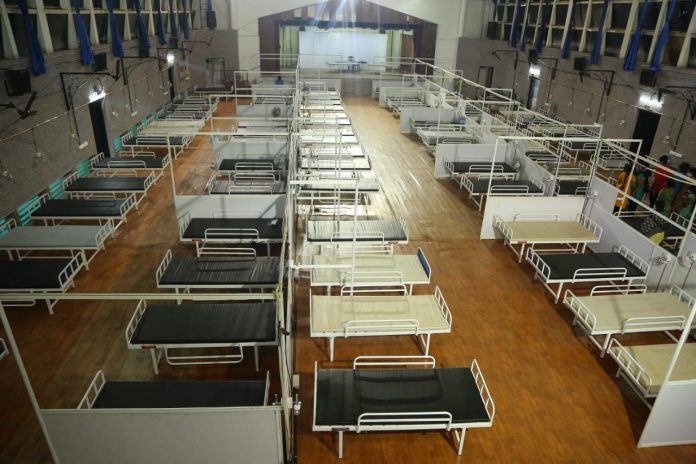 In the midst of the chaos unfolding in the country due to a desperate shortage of oxygen beds and ICUs, here’s a story of hope. Bharat Petroleum Corporation Limited (BPCL) and the Kerala government have come together to construct a makeshift hospital, which is probably the largest of its kind in India.

According to the Ernakulum district administration, a makeshift medical care facility with 1,500 oxygen beds is getting ready at the BPCL complex in Kochi. “This will start functioning in full swing in the next couple of weeks,” said S Suhas, district collector, Ernakulam. He told The Federal that a facility for 500 patients was already set up at the Cochin Refinery School and the admission of patients have started. A 35,000 sq ft makeshift facility with a capacity of 1,000 beds is being additionally created.

Also read: After a year of seesaw COVID battle, here’s why Kerala is still vulnerable

The oxygen produced by BPCL would be made available to the COVID patients through pipes connected to the beds in this makeshift hospital. BPCL has assured them that they would provide an uninterrupted supply of ten metric tonnes of oxygen a day. A German tent is being used to erect this temporary structure. The makeshift hospital which would be completely functional in two weeks is the outcome of a combined and collective effort of the district administration, BPCL, local bodies and a handful of private hospitals in Ernakulam.

The district collector also said that the COVID treatment will be available in this makeshift hospital at the rate fixed by the Karunya Arogya Suraksha Padhathi of the health department. “Those who need critical care will be quickly shifted to nearby hospitals where ICU and ventilator facilities are available. Ambulances will be ready for this purpose,” he added.

BPCL is also setting up PSA oxygen plants in two government hospitals in Maharashtra, three hospitals in Kerala and five in Madhya Pradesh. The BPCL authorities have said that they have put up bottling compressor at the refinery, which will facilitate oxygen supply through cylinders.