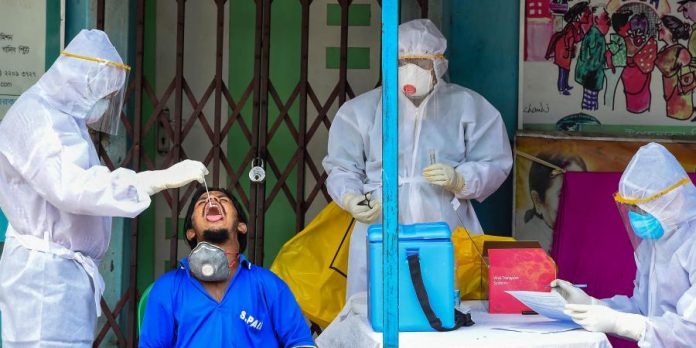 Almost every third person tested for Covid-19 is turning out to be a positive case in West Bengal. PTI File Photo

With almost every third person tested for COVID-19 turning out to be positive, West Bengal is scurrying to ramp up its health care and crematorium infrastructure amid reports of patients being unable to get hospital beds, and delay in cremating bodies.

A 60-year-old resident of Shibpur in Howrah district died of COVID on Tuesday (April 27) night. His son Tamal Chakraborty said despite frantic attempts for days, they could not find a hospital bed for their father who needed ventilator support.

Somehow the family could manage an oxygen cylinder and was trying to provide semblance of health care at home.

“Another ordeal started after his death. For over 12 hours, the body was lying at home even after we informed municipal authorities and health officials. Only around 2pm on Wednesday (April 28), after several calls, people from the municipality came to take the body for cremation,” Chakraborty said.

Similar reports are coming in from other parts of the state, including Kolkata, as the demand for hospital beds for COVID patients has increased manifolds. The civic body and hospitals are too hard-pressed in managing bodies infected by the virus.

There has been a steady increase in death toll too. On Wednesday 77 people died of COVID in the state, four more than the previous day’s count. On Monday the virus took the lives of 68 people in the state.

Health officials said logging a test positivity rate of over 30 per cent, the state is staring at a major health crisis as many hospitals, especially the private facilities, are running out of COVID beds.

More than 30 of the 97 private hospitals with COVID treatment facilities ran out of bed, according to a list of bed-status in private hospitals updated by the health department on Wednesday. These hospitals include Apollo Gleneagles Hospital, Fortis Hospital, AMRI Hospital Dhakuria, All Asia Medical Institute, Saroj Gupta Cancer Research Centre, among others.

The bed scenario is not much better in government hospitals either.

Lack of real-time information about the availability of beds in various hospitals is adding to the woes. To address the problem, the government is about to launch a portal in addition to the existing integrated helpline numbers to update bed status.

All private hospitals have been directed to earmark 60 per cent of their beds for COVID patients. A few stadiums are also being converted into temporary COVID units by some private hospitals.

The Medical Superspecialty Hospital is setting up a 300-bed facility at the Kishore Bharati Stadium in Kolkata. The city’s two other sports complexes Gitanjali stadium and Salt lake Stadium are also to be converted into COVID health care facilities, according to health department sources.

Charnock Hospital is planning to upgrade the ‘safe-house” facility at Kolkata’s Haj House into 300-bed units. “To begin with we are trying to make at least 100 beds, including 20 ICU operational by May 1,” said Prashant Sharma, managing director of the hospital.

An indoor stadium of the Siliguri Municipal Corporation was handed over to the health department to set up a 70-bed COVID care facility. Six beds will have oxygen supply.

The government is also discussing with the housing complexes to turn their community centres into basic COVID care units with a few beds and oxygen facilities.

The state at present has around 20 thousand Covid beds. There are around 1,800 beds with ICU facilities and 1,283 ventilators for the Covid patients, according to the health department data.

“There is no acute shortage of beds in hospitals as of now. But the way cases are increasing, particularly in Kolkata and its surrounding areas, we need to be prepared for the worst,” a senior health official said.

At the moment the state has a daily average production of 457 MT of oxygen as against the requirement of about 223 MT per day, the official said. “At present we can provide uninterrupted 24-hour oxygen supply to 12,500 Covid patients. The target is to increase it to 15,500 by May 15, the official said.

A 24X7 control room has been launched to ensure smooth supply of medical oxygen. All private and government hospitals have been asked to contact the control room in case of any shortage.

As for testing facilities and delay in report delivery, the official said seven new testing labs have been set up in the past one week and one more is awaiting approval.

Amid a spurt in body counts, the Kolkata Municipal Corporation as well as health departments have sanctioned appointment of more doms (cremation helpers) for six months at a monthly remuneration of ₹ 10,000.

“Considering the pandemic situation, the government is pleased to accord sanction for engagement of two domes at the Asansol District Hospital for the disposal of COVID-19 positive bodies from the mortuary of the said hospital,” read a government order.

A similar sanction has been given to some other hospitals in Nadia, Kolkata and other districts, sources said.