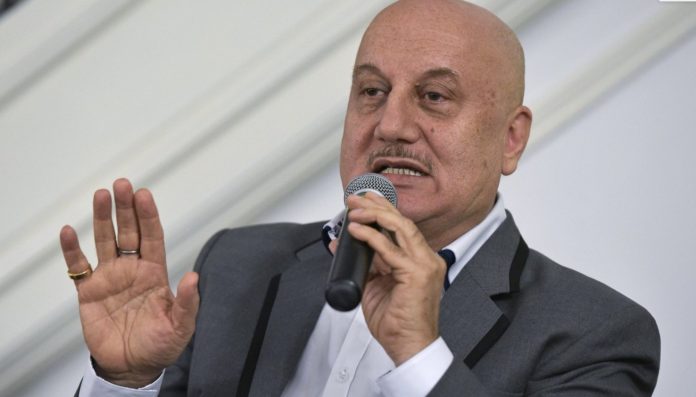 Bollywood actor believed the criticism being directed at the central government right now is valid, as you have to be "inhuman" not to “get affected by the bodies floating in the rivers

As the second wave of the pandemic continues to wreak havoc in India, several experts and international media, including the medical journal, the Lancet, have sharply criticised the Central government for its complete mismanagement of the situation. Now, the Centre faces censure from an unexpected quarter: Bollywood actor Anupam Kher, who is widely known for being a major champion of Prime Minister Narendra Modi. Moreover, his wife Kirron Kher is a BJP MP from Chandigarh.

In an interview to PTI agency, Kher however has now admitted that the government has “slipped up” and scathingly added that they should now realise that there’s more to life than “image building”, Hindustan Times reported.

Kher said that the government should be held responsible for what is happening in the country. He believed the criticism being directed at the government right now is valid as “you have to be inhuman” not to “get affected by the bodies floating (in the rivers).” Kher was referring to the bodies of suspected COVID patients that were found floating on the Ganga river that has shocked the nation.

However, the actor also added that the BJP-led government’s lapses should not be used for “political advantage”.

In a major reversal to his earlier staunch support of the Modi-government (much to the consternation of his Bollywood colleagues and fans), Kher said about the Central government, “Somewhere they have slipped. It is time for them to understand that there is much more to life than just image building maybe.”

Further, Kher, a former chairman of the Film and Television Institute of India (FTII) added, “But for another political party to use it for their gain, I think that is also not right. I think we should, as people, get angry. It is important to hold the government responsible for what’s happening.”

Kher, who has acted in many films, in which he has bitterly fought against an indifferent, incompetent bureaucracy, now termed the state of affairs in the country as a “war-like” situation. He asserted that people have the right to complain and get angry. However, we should also learn to be compassionate towards fellow citizens.

Like other Bollywood actors, who are pitching in their mite to help during this crisis, Kher too seems to be part of an initiative to provide essential medical equipment across India, as part of ‘Project Heal India’ to fight against the COVID-19 pandemic.