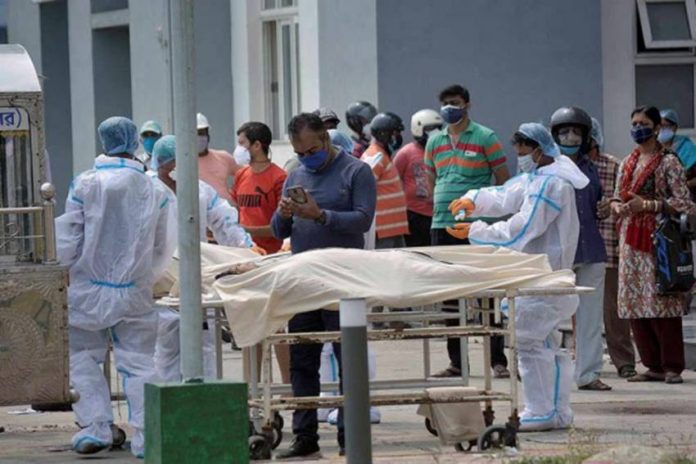 The Centre in an affidavit submitted to the Supreme Court last night (June 19) has promised action against doctors if they fail to certify coronavirus deaths as COVID-deaths regardless of where it takes place. Until now, coronavirus patients who succumbed to the disease in hospitals were only being certified as COVID-deaths.

People who were dying at home or even at hospital parking lots were not recorded as COVID-deaths, which has resulted in a major discrepancy in fatality figures around the country that have run into lakhs. This rule by the Centre to register all COVID-deaths comes in the wake of a lot of unaccounted COVID deaths coming to light in many states.

For example, big differences in official death figures and what has actually transpired on the ground have been seen from this year and in the past in the states of Madhya Pradesh, Andhra Pradesh, Tamil Nadu, Karnataka, and Delhi. Earlier, a NDTV report earlier had analysed data which had revealed that there has been 4.8 lakh unexplained deaths just in these five states alone.

Further, NDTV added that data from Bihar too showed that 75,000 people had died in the state of “unexplained causes” in the first five months of this year. This number turns out to be 10 times higher than the official pandemic death figure released by the state. In Maharashtra too, revised death data in just the last 12 days have increased the state’s overall COVID-related deaths by 8,800. The state has recorded the highest number of deaths in the country with over 1.17 lakh victims.

The 183-page affidavit filed by the Centre last night was in response to a plea made to the apex court, seeking “minimum standards of relief” and ex-gratia payment to COVID-19 deceased, said an India Today report.

The plea was filed by advocates Gaurav Kumar Bansal and Reepal Kansal, who had referred to Section 12 of the Disaster Management Act 2005, according to which, the national authority shall recommend guidelines for the minimum standards of relief to be provided to persons affected by disaster, which shall include ex-gratia assistance, a report in Bar and Bench said.

In its response, the Centre has however categorically stated that they cannot give ₹4 lakh compensation to the families of all those who had died of COVID. Since this move would lead to additional financial burden on the States, which were already cash-strapped due to poor tax collections.

The Centre argued that if the entire state disaster relief funds were consumed on ex-gratia for COVID-19 victims, the States may be left with insufficient funds for organising COVID-19 response such as distributing essential medical and other supplies, or to respond to other disasters like cyclones, floods, etc. “Hence, the prayer of the petitioner for payment of ex-gratia to all deceased persons due to COVID-19, is beyond the fiscal affordability of the State governments,” the Centre added.

Also, in a report by News18, the Centre stated in the affidavit that that the disaster management law mandates that compensation applies only to “natural disasters”.

The government also reminded the top court in its affidavit of its earlier judgment to not interfere with executive policies and said the judiciary cannot decide on behalf of the Centre.

Many judgements of the Supreme Court have proven “that this is a matter which should be performed by the authority, to whom it has been entrusted and not one where the court will substitute its own judgement for the decision to be taken by the executive,” the government said.

The Supreme Court will hear the case on Monday.

Meanwhile, the government’s decision to ensure people who die of COVID-19 are registered as COVID-deaths will enable families to get compensation, which is being given by some states. States like Madhya Pradesh have already announced a compensation of ₹1 lakh due to COVID deaths, while Delhi too has declared that if a person died of COVID as a result of lack of oxygen shortage during the second wave, the families will be compensated with ₹5 lakh.

However, if death certificates record death due to lung problem and heart issues, families of victims have to rush from “pillar to post” to prove a COVID death. Hence, the top court had asked the Centre in a notice if there is any uniform policy on issuing death certificates to Corona victims, or are there any guidelines on the issue?

On Saturday, the Patna High Court too had castigated the Bihar government for its reluctance to publish the actual number of fatalities during the COVID pandemic. This was uncalled for and not protected by law, the court had said.

Quoting a 1975 Supreme Court order, the Patna High Court had said on June 19 that the state should not cover this common routine business in “a veil of secrecy”. This is not in the interest of the public, the court had pointed out.

India has officially reported over 3.85 lakh COVID deaths so far, according to figures released by the Union Ministry of Health and Family Welfare. Though, the Centre had denied that large number of its citizens were succumbing to COVID-19, their claim turned hollow when photographs of overflowing crematoriums and graveyards started appearing in the news media. Moreover, the visuals of bodies buried in the sandbanks of Ganga and flowing down the river in April and May, clearly demolished the lies.

Whats next for Australia after World Cup exit...