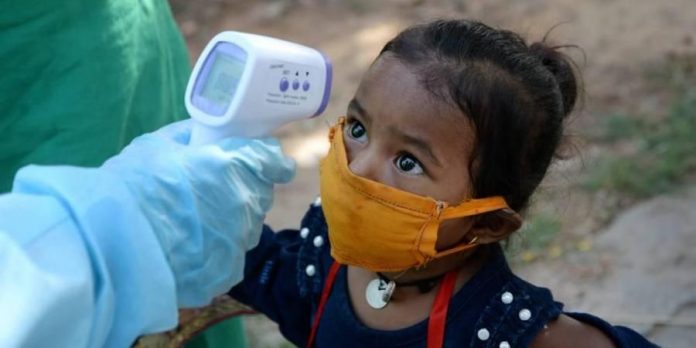 Authorities are alarmed over detection of infection in at least 8,000 children and teenagers in Ahmednagar in May. Representative Image

Even as the Maharashtra government on Sunday (May 30) extended the lockdown-like curbs till June 15, reports emerged of more than 8,000 children being infected with COVID in May in the state’s Ahmednagar. The authorities are ramping up health infrastructure in the district against the possible third wave of the virus which is feared to affect children.

Chief Minister Uddhav Thackeray, while announcing extension of lockdown on May 30, said relaxations would be granted depending upon the COVID-19 positivity rate and availability of oxygen beds. As of Sunday, Maharashtra’s tally of COVID cases stood at 57,31,815 and the overall death toll is 94,844. The state has 2,71,801 active cases, as per the state health department.

In Maharashtra’s Sangli city, a COVID ward is being readied especially for children. Currently, five children are being treated in the city and the facility is being prepared for more patients.

“We have prepared this Covid ward for kids so that if and when the third wave comes, we are prepared. And kids will not feel they are in a hospital but instead will feel they are in a school or a nursery,” corporator Abhijit Bhosale said, NDTV said.

Also read: COVID spread deadlier in southern Maharashtra than rest of the state

Authorities were alarmed when they found at least 8,000 children and teenagers tested positive for the virus in Ahmednagar this month, accounting for about 10 per cent of the cases in the district.

The district administration is reaching out to paediatricians to make sure they are prepared for the third wave.

“In May alone 8,000 kids got positive. This is worrying,” NDTV quoted Ahmednagar district chief Rajendra Bhosale as saying.

The Central government’s top scientific adviser Dr K VijayRaghavan had said earlier this month that a third wave of the coronavirus is “inevitable”.

On May 30 while extending the curbs, the government said in municipal corporations or regions of districts with less than 10 per cent COVID positivity rate and where the availability of occupied oxygen beds will be less than 40 per cent, all establishments engaged in essential commodities and services that are currently opened from 7 am to 11 am can now remain open from 7 am to 2 pm.

For districts and corporations having more than a 20 per cent positivity rate and where over 75 per cent of oxygen beds are occupied, the borders of such districts will be closed and no person will be allowed to enter or exit in such districts, PTI reported.

Instead of implementing the ‘Break the chain’ order uniformly in the state, the restrictions will now be relaxed or made more stringent till 7 amof June 15 by taking into account the positivity rate in the municipality jurisdiction and areas of districts, and the availability of oxygen beds at various places, the government said.