When foreign minister of Tuvalu, an island nation, stood in knee-deep seawater to deliver his speech to COP26, he was making a very important statement. Minister Simon Kofe was warning the world of the impending catastrophe for hundreds of small nations like his, which could get submerged, if climate change was not taken seriously and acted upon.

The parameters for climate action sound simple: cut carbon and methane emissions, reduce deforestation, save biodiversity and aggressively promote renewable energy. What gets missed out though is: Who is supposed to do this and to what extent? If it is a collective responsibility then can all nations – high income and low income – be treated using the same yardstick? Can a country like the US, with per capita income of $66,000, share the same responsibility towards protecting the environment as Bangladesh, which has a per capita income of just $5,000?

In part III of our COP26 Impact series, we look at Climate Finance, a loosely put word with no proper definition, which united low and middle income countries (LMIC) at the Glasgow climate summit to tell developed countries to loosen their purse strings and create a level-playing field for a just fight against climate change.

Part I: India on path to meet renewable energy target in 2030, but hurdles remain

Part II: India’s coal ‘phase down’ call was all about climate justice

At UN climate summit in Copenhagen (2009), rich countries promised to channel US$100 billion every year to poor and developing countries by 2020. This fund was supposed to be given to these struggling economies to make effective plans so as to stop the global temperature from rising above 1.5 degrees Celsius of the pre-industrial levels.

The promise was all but broken. Not only have the developed countries failed to provide US$100 billion a year, but at Glasgow they agreed to disagree on mobilising US$600 billion worth of climate finance for the period 2021-25.

The Organisation for Economic Co-operation and Development (OECD), an intergovernmental organisation mostly comprising rich countries, claims that the rich nations contributed $80 billion in climate finance to developing countries in 2019, up from $78 billion in 2018 and $37.9 billion in 2013. What the report doesn’t say is that the bulk of this funding came in the form of repayable loans and not grants. Some of the funds were even given for purposes like clean drinking water and education, which do not directly contribute to climate change measures. This confusion prevails mainly because the United Nations Framework Convention on Climate Change (UNFCCC) has put all funds (loans, grants etc.) under the same umbrella. Basically, nobody knows what ‘Climate Finance’ actually constitutes.

Besides, there are discrepancies in the numbers quoted by rich countries. For example, OECD claims climate finance of $62 billion was made available in 2014, but the Ministry of Finance in India said the actual number was only $1 billion.

At the Glasgow summit (October 31 to Nov 12), developed countries like the UK were hyper-excited about striking a “deal for a better future”, but like-minded developing countries (LMDC) like India were keen to extract their pound of flesh before the glorified Glasgow Pact would take shape. Neither the rich countries nor the poor ones got what they precisely were aiming for, except for a promising start.

COP26 took off on a high note with several countries, including India, committing their net zero emission targets. But as the talks progressed, the frustration of emerging economies became palpable. “Mr. President, all we hear in the negotiations’ rooms, corridors and statements is ambition, ambition, ambition [for mitigation, adaptation, and means of implementation]. However, there does not seem to be any appetite from our partners to unleash ambition when it comes to the decisions which we have seen through the first week of COP26, [like climate finance],” said the low and middle income countries (LMDCs) in a statement.

India too called for setting up “new collective goal” that reflect upon the provisions and mobilization of climate finance.

The first draft on Long Term Finance was rejected by a majority of countries for the simple reason that it lacked a commonly agreed upon definition of climate finance. The revised draft too proved inconclusive as the president of COP26 pushed the idea of a draft proposal on climate finance to COP27, to be held in Egypt next November.

The developing nations were clearly unhappy with the use of words in the Glasgow draft document like “urging”, “calling” and “inviting”, saying these words are not strong enough when the world requires concrete action to tackle climate change.

As the negotiations for financing opened, emerging countries needed a number to start the talks with. On Day 3 of COP26, Prime Minister Narendra Modi said that India expects developed countries to make USD 1 trillion available as climate finance as soon as possible. 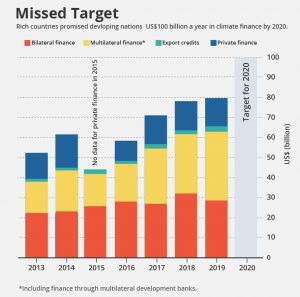 This figure of $1 trillion was latched upon by low and middle income countries to propose that the developed countries should provide them at least $1.3 trillion per year between 2025 and 2030. The rich nations, however, refused to commit on a number, suggesting formation of a two-member committee (with a representative from each side) to discuss “a new collective quantified goal”. Thus, they succeeded once again in fizzling out any attempt to commit on delivering the required finance.

“COP26 was non-committal on incremental finance right from the beginning. The most opaque part of the climate discussion has been the finance component. So India took a stand against phasing out coal and instead remained firm on phasing down coal usage,” says Samrat Sengupta, programme director, Climate Change and Energy at the Centre for Science and Environment, New Delhi.

As things stand today, the $100-billion climate finance goal looks like a mirage with no agreement among member countries as to how much each rich country should contribute. The US, which had stepped out of the 2015 Paris Agreement under Donald Trump, has emerged as the biggest defaulter.

A report suggests that Uncle Sam should have contributed about 50% of the $100 billion fund, mainly on account of its richness, historical emissions and demography. Unfortunately, the country’s average annual contribution between 2016 and 2018 was a meagre $7.6 billion.

On the other hand, Sweden, Japan and France gave more than what they should have, though most of the funds they provided were in the form of repayable loans and not grants.

“Most developed countries, except a few like Sweden and Japan, have defaulted on their commitment to $100 billion yearly climate finance. However, this issue was being repeatedly sidelined in COP26. The developed countries need to remedy this at the earliest for preparing a larger climate finance goal post 2025,” said Priyadarshini Karve, national convener, Indian Network on Ethics and Climate Change (INECC).

Spending crores of rupees on rebuilding lives and cities after a devastating flood TOMORROW is much costlier than spending on measures to prevent flooding TODAY. Prevention is better than cure, isn’t it?

In 2021 alone, the Government of India spent Rs 30,000 crore on dealing with the aftermath of natural disasters! “Climate finance should get priority because the cost of mitigation efforts is far, far higher than the cost of financing,” says Dr Gurudas Nulkar, an economist turned ecologist, who recently prepared a report on damages caused to natural, human, man-made and financial resources due to cyclones.

Developed countries aren’t giving enough finance to poor countries to fight climate change because they haven’t made a budgetary allocation where money could be reserved for preventing floods, say in the next 10 years. “Developed countries never budget for protecting natural resources. They even fail to quantify risks. And if risks cannot be quantified then on what basis will the budgets be allocated?” says Dr Nulkar.

Today, countries look at natural calamities only in terms of loss to life and property. Do they think how a flood, for instance, impacts the life of an average farmer who lost his crop and cattle or a poor fisherman whose boat got wrecked? A one-time compensation of a few lakh rupees cannot bring back the self-respect, confidence and fruits reaped after years of penance.