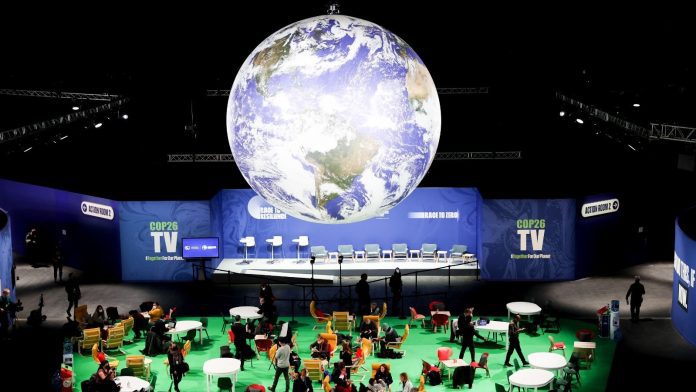 Prime Minister Narendra Modi added a little warmth to the global climate, but of the kind that gladdens the hearts of climate activists. He committed India to a net-zero goal by 2070, 10 years behind China’s declared net-zero goal, but addressing a bugbear of the climate community that India, among the world’s largest emitters, has not fixed a deadline on adding net-zero greenhouse gas emissions. He also offered more proximate targets, to be reached by 2030: to reduce India’s projected emissions by 1 billion tonnes, to achieve 500 GW of non-fossil fuel power generation capacity, to meet 50 per cent of the nation’s energy requirements from renewable sources and to reduce the economy’s emission intensity by 45 per cent.

The fall in energy intensity is needed to facilitate the other goals. However, there is a bit of a mismatch between the goal to have 500 GW of non-fossil-fuel installed capacity and the goal to meet half the energy requirement from renewable sources.

Non-fossil fuel sources would include nuclear power, which should play an ever-increasing role in generating power, particularly the baseload, apart from hydroelectricity, which is ideal for peaking power. Renewable sources are a subset of non-fossil-fuel sources. If half the energy requirement is met from renewable sources and we have a lot of nuclear and hydel capacity in addition, say, enough to meet an ambitious 25 per cent of the energy demand, that means India would generate harmful emissions only for generating a quarter of its energy needs.

Ideally, the goal for energy from non-fossil fuel sources should be more ambitious than the target for renewable capacity.

The big plans India has for green hydrogen, backed up with large orders already being placed for megawatt-hour storage of power, together can address the intermittency of renewable power. But these cannot raise the capacity utilisation of renewable sources: the sun must shine and the wind, blow, for solar panels and wind turbines to generate power. That means a significantly higher renewable capacity to generate the needed power.

Delivering the National Statement at the @COP26 Summit in Glasgow. https://t.co/SdKi5LBQNM

The prime minister also raised the issue of lifestyle. From frenetic consumption, he urged the world to move towards conscious reduction in the demand placed on the world’s resources. He could have recalled Mahatma Gandhi’s assertion that the world has enough to meet everyone’s needs, but not to meet everyone’s greed.

While the rich world blames China for being the world’s largest emitter of greenhouse gases, they conveniently forget that China produces these emissions in the course of feeding the conspicuous consumption of the rich world. If the rich world curbed its consumption demand, China would need to produce less, and there would be lower emissions, and Chinese policy would focus more on improving the lot of their own citizens.

The prime minister also did well to demand a trillion dollars of climate funding, raising the bar for what the developed world ought to do, to achieve tangible action by poorer nations. He also called for tracking of the achievement of progress on spending. This is important both conceptually and for effective implementation.

What he failed to do was to ask for steep targets of negative emissions by the rich world. That is to say, the rich world must remove carbon from the air, even if that is an expensive proposition right now. But that is a moral obligation that the rich countries will find difficult to shrug off, given their rich responsibility for the accumulation of carbon dioxide (CO2) in the atmosphere that has raised global temperatures to 1.09 degrees Celsius above pre-industrial levels already.

The Sixth Assessment Report of the Intergovernmental Panel on Climate Change, the UN’s expert body on the subject, estimates that some 700 billion tonnes of CO2 would need to be removed from the atmosphere to contain global warming below 1.50 C by 2050. Those with the resources to do this happen to be the same people who have the moral obligation to do it, and for the reason why they today have the resources to do it: they filled the air with greenhouse gases in the decades of fast, resource-intensive growth.

It would help carbon removal if either of two things were available: a steep enough price for traded carbon or chemistry that allows carbon removed from the air to be used as the starting point for producing organic compounds that today come from petroleum.

High-end cars already used carbon fiber for their body panels. The Boeing 787 Dreamliner is made of carbon fiber. Carbon fiber can usefully replace heavy steel cables of the kind used in lifts and cranes, to achieve both superior strength and energy-saving reduction of weight.

Even as India demands transfer of climate technology from the rich nations, there is every reason for India to invest in R&D that would produce this sort of chemistry.

Does announcing a target nearly five decades in the future really make sense? Does India’s embrace today of carbon neutrality in 2070 matter in the real world? The answer to both questions is in the affirmative.

The rich world is committed to achieving carbon neutrality by 2050, which, after the Sixth Assessment Report, is not enough. They need to have achieved significant net negative emissions by then. But setting a target helps formulate policy that requires time to execute and achieve results. It also helps governments to put in place incentives that will help companies in the area of green energy make faster progress.

Before anyone rushes to conclude that India’s climate goals are designed to help Ambani and Adani with their vaulting green hydrogen ambitions, let us note that the Biden infrastructure bill contained a proposal — how much of it would survive its political pruning through Congress is anyone’s guess — to offer green hydrogen a subsidy as high as $6 per kg. Ambani has declared that he would bring down the price of green hydrogen to $1 a kg by 2030, and he did not ask for any subsidy.

Before COP26, India and China were seen as the holdouts on the climate front. Xi Jinping did not do his country any favour by failing to show up. India, on the other hand, will leave Glasgow with some additional sheen to its climate reputation.

SP takes on RSS chief after his ‘no cas...