The Indian Railways (IR) has been struggling to meet its internal resource generation targets annually even as it has been meeting more and more of its capital expenditure (capex) requirements through borrowings. This pattern is unlikely to change in the coming fiscal despite the expectation that the government may enhance the capex for the railways by 16–18% in the upcoming Union Budget from the ₹1.6 lakh crore earmarked in 2019-20.

Already the government has been talking of huge incremental investment in the IR, with Finance Minister Nirmala Sitharaman saying capex over the next 11 years would be ₹50 lakh crore in her Budget speech last year. This means almost tripling the average annual capex of the IR, which usually hovers around Rs 1.5-1.6 lakh crore.

But instead of the government pumping in more money into the national transporter, the plan is to get at least two-thirds of this increased annual capex requirement from the private sector through the Public-Private Partnership (PPP).

While the PPP mode of financing critical railways capex does raise questions on whether the government ultimately wants to privatise some of its functions, one must remember that capex enhancement is crucial for its very survival.

The Railway’s modal share of transport for passengers and freight needs to increase for it to remain viable and experts have said earlier that the current share is just around 10% for passengers and around 30% for freight. In other words, 90% of passenger traffic in India is not using the railways for domestic travel and just a third of the freight being transported across the country uses the national transporter. To augment these numbers, higher capex is the need of the hour.

The existing railways network is congested, over-utilised and one of the key reasons for this has been continued underinvestment by successive governments. But having said that, some hurdles remain in the ambitious push for getting around ₹2 lakh crore annual investment through the PPP route.

For example, the government needs to make it attractive for the private sector to invest in the railways, and the first step towards this would be setting up an independent regulatory body. Today, the railways is both the operator and the regulator, making it difficult for private investors to trust its systems and processes.

Anyway, the railways has already begun the process of offering some trains on busy routes to private operators in what many say is an attempt to privatise the national transporter. Again, for this experiment to be successful, the railways needs an independent regulator.

Not only does the transporter need to set its own house in order in terms of regulatory mechanisms, it must also take several other steps if the private sector is indeed required for capex. A Railways expert pointed out that first of all, the IR needs to create a mindset internally to deal with private sector investors through pricing flexibility for private train operators and getting higher efficiency for a fee, instead of looking for revenue considerations in PPP projects.

Meanwhile, the nearly 22 million daily train passengers of railways do not expect any fare hike in the upcoming budget since a round of fare increase has just been done. The railways expects to make about ₹200 crore incrementally each month through this nominal increase. The fare hike has been paltry given the railways’ revenue generation trend so far this fiscal — all indications point to a revenue shortfall this fiscal of around ₹25,000 crore a year or nearly ₹2,000 crore a month, and this fare hike would do little to help the national transporter’s finances in any significant manner. 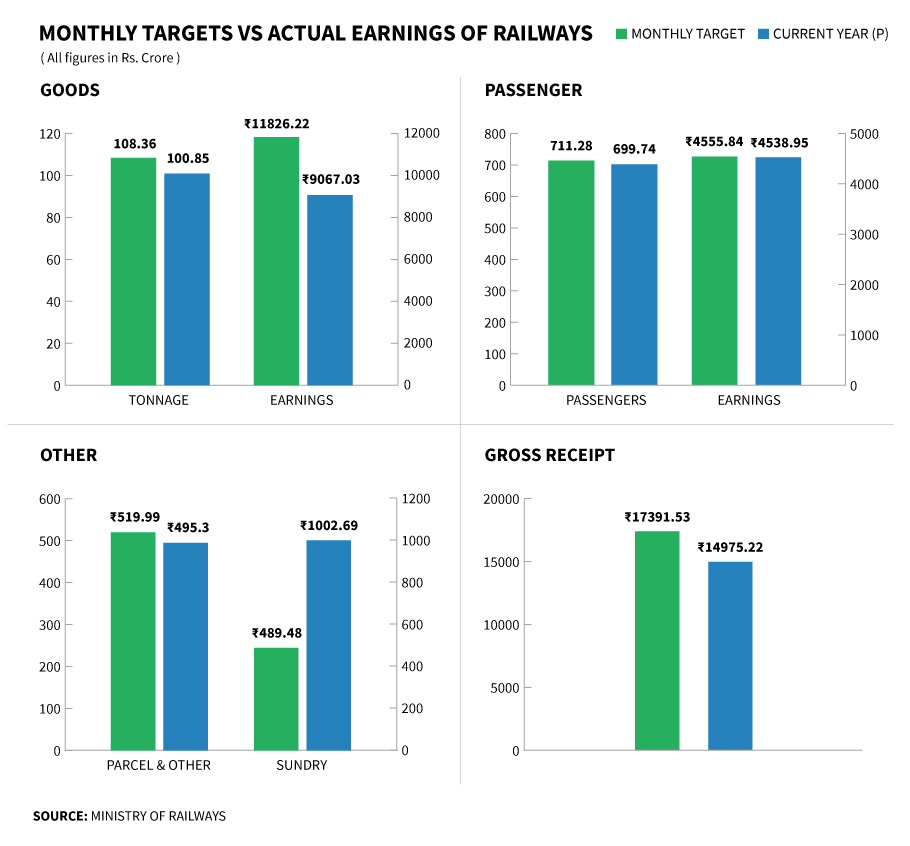 As per Railways’ own statistics till November this year, it reported falling freight loading and declining passenger numbers and traffic receipts were well below the target set out at the beginning of the year.

Railways Minister Piyush Goyal told Lok Sabha in a written reply that a 14% increase in revenue target over 2018-19 is expected this fiscal, at ₹216,575 crore (from ₹190,507 crore). But Railways’ own numbers show the insurmountable difficulty in achieving such high revenue growth. Year-on-year freight loading has been down by almost 10 million tonnes between April and November FY19 but if one were to compare it to the target for 2019-20, the shortfall is over 40 million tonnes. The year-on-year drop in freight earnings is well over ₹3,000 crore while the variation from budget target is a whopping ₹17,700 crore. In the passenger segment, the number of passengers taking a train have fallen by over 68 million year-on-year but compared to the budget target, the decline in passengers is over 170 million.

The overall shortfall in traffic receipts is about ₹400 crore year-on-year till November (this has widened to ₹500 crore between April and January 10) but from the budget targets, the difference till November was already nearly ₹22,000 crore. Also, working expenses of Railways have risen by nearly ₹4,400 crore during this eight-month period vis-a-vis budget targets.

While the fare hike may not mean much in terms of Railways’ overall financial sustainability, it will likely reduce the loss the transporter incurs every year in ferrying passengers since tickets in most classes of train travel continue to be priced below cost. This loss is known as social service obligation.

In the same Lok Sabha reply quoted above, Goyal said the Railways incurred a net social service obligation cost of ₹31,128 crore in 2017-18 by pricing passenger services below cost.

The social obligation cost has been escalating year on year; it was ₹25,561 crore in 2016-17 and ₹22,262 crore in 2015-16. The IR cross-subsidises the passenger business through its freight earnings but with freight loading also suffering this fiscal, the math has been skewed more than in previous years.

The hike this time has been in base fares, by one to four paise per kilometre but the catch is that the increased fare is applicable to only every third passenger. There is no increase in fares for the suburban segment — which accounts for almost 56% of total passengers — as well as for season ticket holders.

Experts have been exhorting the Railways to effect passenger fare hikes as per a pre-determined formula and also that fare increases should be gradual as well as regular. This way, passengers don’t feel the pinch. Also, the freight rates of the IR need some downward movement and it is possible that the Budget indicates a reduction in these rates to increase freight loading.

Another important marker of the Railways’ financial ill-health has been the consistently high operating ratio (how much it spends to earn each rupee). This ratio has only worsened during the NDA 1 term. In at least three of the last five years, this ratio was over 95% — 96.5% in 2016-17 and 98.4% in 2017-18. For 2018-19, it has been revised upwards from 92.8% at BE to 96.2% in the interim budget and further to 97.3% now. So as earnings lag targets and operating ratio climbs, the setting of viable commercial goals also assumes importance.