The Adani Enterprises on Tuesday (August 23) said that it will acquire a 29.18 per cent stake in news channel NDTV through a subsidiary company, and launch an open offer to acquire another 26 per cent in the media company.

Rules of the Securities and Exchanges Board of India, empowers an entity which acquires more than 25 per cent stake in a company to announce an open offer to shareholders of the latter to sell their shares at specific rates.

Publicly-listed NDTV, through a statement had denied the sale of a majority stake, stating that a notice in this regard was served on the company without the knowledge of the founders or promoters.

“Without any discussion with NDTV or its founder-promoters, a notice has been served upon them by Vishvapradhan Commercial Pvt Ltd (VCPL), stating that it (VCPL) has exercised its rights to acquire 99.50 per cent control of RRPR Holding Pvt Ltd (RRPRH), the promoter-owned company that owns 29.18 per cent of NDTV,” NDTV said in a BSE release.

Ravish Kumar, a senior executive editor of NDTV, and a prominent face of the channel, has also dispelled rumours about his exit over the alleged takeover by Adani Group.

In a satirical tweet on Wednesday, Kumar said the ‘news’ about his resignation from the media house, is as good as rumours about Prime Minister Narendra Modi agreeing for an interview with him and actor Akshay Kumar waiting with mangoes outside his house.

“Respected citizens. The word about my resignation is just like the rumour you heard about Prime Minister Narendra Modi agreeing to give me an interview and Akshay Kumar waiting outside my gate with Bombay mangoes. Yours, Ravish Kumar, the world’s first and costliest zero-TRP anchor,” Kumar tweeted in Hindi.

In an email to employees, Suparna Singh, head of NDTV Convergence Limited said that the acquisition was made without the knowledge of owners Radhika and Prannoy Roy, hinting that the company may take legal action next.

“This acquisition was made without their (Radhika and Prannoy Roy) consent or without any sort of notice,” she said. “We are in the process of evaluating the next steps, many of which involve regulatory and legal processes,” she said.

Stating that the acquisition of RRPRH by VCPL was done on basis of a loan agreement dating back to 2009-2010, she said the Roys, however, still told 32 per cent of NDTV.

“VCPL has been acquired by Adani Media Group.  This Group has also announced an open offer to buy upto 26 per cent of NDTV’s shares from the market.  Such an open offer is required if one entity picks up 25 per cent in the Company (VCPL has acquired 29 per cent as stated above),” the email said. 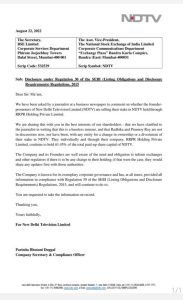 “The notice from VCPL is based on a loan agreement it entered with NDTV founders Radhika and Prannoy Roy in 2009-10. The notice states that VCPL has exercised its option to convert 19,90,000 warrants into equity shares of RRPRH at ₹10/- per share, and that a total of ₹1.99 crore has been transferred to RRPRH. The NDTV founders and the company would like to make it clear that this exercise of rights by VCPL was executed without any input from, conversation with, or consent of the NDTV founders, who, like NDTV, have been made aware of this exercise of rights only today. As recently as yesterday, NDTV had informed the stock exchanges that there was no change in the shareholding of its founders,” NDTV said in the BSE release.

The media house put up a similar clarification on its website, stating that the Roys were served a notice by VCPL stating that the latter had acquired control of RRPRH which in turn owns 29.18 per cent of NDTV.

The news channel has been asked to transfer all its equity shares to VCPL within two days.

“The NDTV founders and the Company would like to make it clear that this exercise of rights by VCPL was executed without any input from, conversation with, or consent of the NDTV founders, who, like NDTV, have been made aware of this exercise of rights only today. As recently as yesterday, NDTV had informed the stock exchanges that there was no change in the shareholding of its founders,” the statement published on Tuesday read.

“NDTV has never compromised on the heart of its operations – its journalism – we continue to proudly stand by that journalism,” it added.

Also read: From airports to sports to water, a look at Adani’s expanding business list

The acquisition of a 29.18 per cent stake was to be indirect, made through VCPL,  a wholly owned subsidiary of AMG Media Networks, which is owned by Adani Enterprises, an entity listed on the Bombay Stock Exchange (BSE).

Under the open offer, VCPL and AMG Media, along with Adani Enterprises, offered ₹294 each for the acquisition of up to 1.7 crore fully paid-up equity shares of NDTV from the public shareholders. A public announcement has been made by JM Financial Ltd, which is managing the offer on behalf of the acquirers.

“The offer price is higher than the price determined in accordance with Regulation 8(2) of the SEBI (SAST) Regulations,” the offer said.

On Tuesday, shares of NDTV settled at ₹366.20 on the BSE, up 2.61 per cent from the previous close. On the other hand, most of Adani Group stocks ended lower following a report that the conglomerate is ‘deeply overleveraged’, with the group predominantly using debt to invest aggressively across existing as well as new businesses.

VCPL has exercised the right to acquire 99.5 per cent of the equity shares of RRPR Holding Pvt Ltd, a promoter group company of NDTV, which holds a 29.18 per cent stake in the media group, a press release said.

AMG CEO Sanjay Pugalia said this “acquisition is a significant milestone” in the company’s goal to “pave the path of new age media across platforms”. “AMNL seeks to empower Indian citizens, consumers and those interested in India, with information and knowledge. With its leading position in news and its strong and diverse reach across genres and geographies, NDTV is the most suitable broadcast and digital platform to deliver on our vision. We look forward to strengthening NDTV’s leadership in news delivery,” he added.