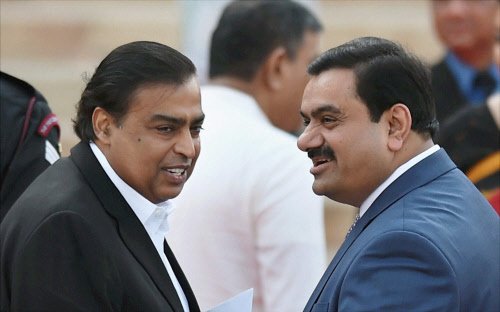 Ambani is also currently the 13th richest person in the world, closely followed by Gautam Adani at 14th. One of the reasons, Adani zipped past Zong Shanshan has been because of the sharp gains in the stock prices of his group companies over the last many months.

The Bloomberg Billionaire Index shows that Adani’s net worth is $66.5 billion against Zhong Shanshan’s $63.6 billion. Adani’s wealth has shot up by $32.7 billion this year, while Mukesh Ambani has lost $175.5 million so far with his total wealth at $76.5 billion.

Adani Green Energy and Adani Power’s prices notched up a 433 per cent and 189 per cent jump, respectively, during this period, while Adani Power too moved up 142 per cent. The Adani group’s portfolio is spread across sectors like ports, airports, energy, resources, logistics, agribusiness, real estate, financial services, gas distribution, defense businesses etc.

The company, founded by Gautam Adani, who started out as a commodities trader, has also been on an acquisition spree. In what is touted as the largest acquisition in the renewable energy sector in India, the Adani group recently acquired Softbank’s Indian renewable energy business SB Energy’s 5 GW renewable power portfolio for an enterprise valuation of $3.5 billion.

In March, the Adani Ports and Special Economic Zone Ltd bought a 58.1 per cent stake in the private port Gangavaram Port Ltd at Visakhapatnam from D.V.S. Raju and family for ₹3,604 crore. While Adani Enterprises Ltd (AEL) is set to become India’s largest private airport operator, as they took control of the Mumbai international airport from the GVK group, besides getting a controlling stake in the upcoming Navi Mumbai International Airport.

It has also won 50-year operating rights for the recently privatized airports at Ahmedabad, Lucknow, Mangaluru, Jaipur, Thiruvananthapuram, and Guwahati. These will be leased for operation, management, and development in a public-private partnership model. AEL won the contracts after offering to share the highest revenue-per-passenger with AAI during a bidding process that concluded in February 2019.

Explained: Why shares of the mighty Adani Group crashed