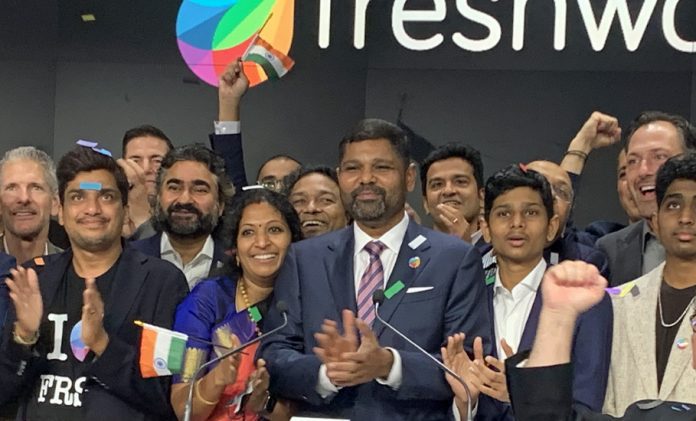 Girish Mathrubootham, co-founder and CEO of Freshworks, tweeted that it was a dream come true for him - from humble beginnings in Trichy to ringing the bell at Nasdaq for the FreshWorks IPO. Pic: Twitter @mrgirish

The shares of Freshworks Inc, the first Indian software maker to list on Nasdaq, surged by over 32 per cent after raising over $1.03 billion in its initial public offering (IPO).

The company’s shares, which were sold higher than the marketed range closed at $47.55 on Wednesday and its market capitalisation rose to a staggering $13 billion. Consider their rival Salesforce was valued at $3.5 billion in a 2019 funding round. This outcome to an Indian IPO has stirred up a lot of elation among startups in India, who expect this listing to boost the confidence of other companies in India, said media reports.

According to a statement issued by the San Mateo, California-based company, they had sold 28.5 million shares at $36 a piece, which was initially pegged at $32-34.

Girish Mathrubootham, an elated co-founder and CEO of Freshworks, tweeted that today a dream has come true for him – from humble beginnings in Trichy to ringing the bell at Nasdaq for the FreshWorks IPO.  He said he felt like an Indian athlete who has won a gold medal at the Olympics before he rang the opening bell at Nasdaq.

Today is a dream come true for me – from humble beginnings in #Trichy to ringing the bell at @Nasdaq for the FreshWorks IPO. Thank you to our employees, customers, partners, and investors for believing in this dream. #Freshworks #IPO #NASDAQ pic.twitter.com/fXz73YxXXR

Mathrubootham told Economic Times that he likened Freshworks’ Nasdaq listing to “the Roger Bannister moment…and then in the immediate year after, you had so many other athletes that did it.” (Bannister was the first athlete to run a mile under four minutes)

According to Mathrubootham, he saw this moment of Freshworks as the equivalent of that moment when Bannister had made history.

What’s more, the Nasdaq listing is expected to hugely benefit three-fourths of the over 4,300 employees of Freshworks with employee stock options. “More than 500 of our employees in India will be crorepatis, and 69 of them are under the age of 30,” said a jubilant Mathrubootham to ET.

In an interview to Money Control, an overwhelmed Mathrubootham (who is a devoted fan of Rajnikanth) quoted the opening lines of the actor’s introduction song from his superhit film, ‘Padayappa’.

He said, “Singa nadai potu sigarathil yeru. Sigarathai Adainthal vaanathil eru”, which is translated as, “Take a lion’s walk and climb the peak. Once you reach the peak, aim and reach the sky.”

Girish explained the lyrics and said, “I see this as a peak that we have scaled. Most people when they reach the peak, they climb down. But, what Rajini says is sigarathai adainthaal vaanathil eru. So, now it is our moment to climb the sky.”

Freshworks: Started out in Chennai

Freshworks, which was first started in Chennai, deals with a suite of products that aid businesses in customer management. For example, the company has a messaging platform and an artificial-intelligence powered chatbot for customer support. Its technology is ostensibly used by more than 50,000 companies, including high-profile names such as Delivery Hero SE, Swedish payments firm Klarna, Cisco Systems Inc. and General Electric Co, said Freshworks.

After the pandemic, Freshworks’ revenues shot up by about 40 per cent last year on the back of many businesses going digital. The company’s sales continued to grow in the first half of 2021, while its net loss dropped.

Freshworks shares are trading on the Nasdaq Global Select Market under the symbol FRSH.

Nurturing a dream of a US IPO

Founded by Girish Mathrubootham and Shan Krishnasamy, Freshworks raised its first round of funds in 2011 and got its first customer, the Atwell College in Australia, in the same year. The early investors in the company were venture capital firm Accel and New York-based technology investment Tiger Global Management. Today, the affiliates of Accel India and others of Tiger Global Management each control more than a quarter of the company’s Class B shares, said the Bloomberg report.

Media reports quoted Mathrubootham as saying that when he had started the company, he wanted to achieve a $1 million revenue. But Shekhar Kirani of Accel had talked to him about a US IPO and that stuck in his head.

Kirani had told him that you can sell Freshworks and make a lot of money, or you can be the first Indian company in SaaS to go public in the U.S. and it would really be a historic milestone. And, since then Mathrubootham has reportedly nurtured this dream.

According to Sameer Gandhi, ACCEL partner and a Freshworks board member, Freshworks continues to grow because its software is intuitive and easy to use. He said the company didn’t need U.S. sales professionals to get the startup off the ground.

Gandhi told ET that Freshworks could be the torchbearer for a whole new generation of entrepreneurs in India. We think that there’s embedded product and tech talent and entrepreneurs everywhere, he added.

While Mohit Bhatnagar, managing director at Sequoia Capital, which has invested in Freshworks observed that the stupendous success of this IPO was going to “stiffen the spine” and provide immense belief that India can build very large $10 billion-plus companies from India by building products in India for the world.