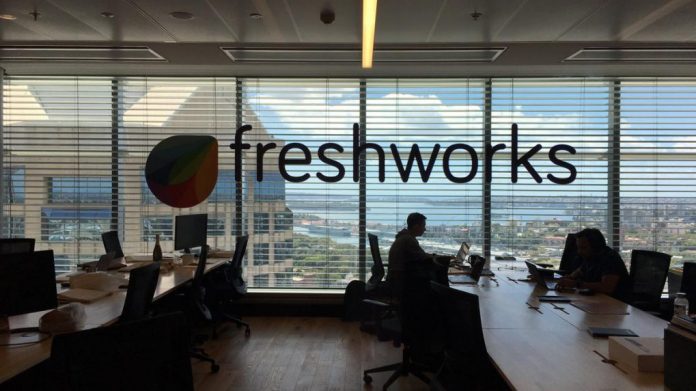 Freshworks Inc, a Chennai and Silicon Valley-based Software as Service (SaaS) provider has filed for a $100 million IPO in the US — the first India-centric SaaS company to do so. It is the second company after Sify in Chennai to tap the US market.

The 11-year-old startup plans to offer 28.5 million Class A common shares at a price range of $28 to $32 per share, according to the company’s filing with the US Securities and Exchange Commission (SEC) on Monday (September 14), said media reports.

Freshworks intends to list its Class A common stock on the Nasdaq Global Select Market under the ticker symbol “FRSH”.

The unicorn will look to raise between $798 million and $912 million through the initial public offering (IPO), said a report in Mint. At the upper band, Freshworks aims at a valuation of $9 billion.

Freshworks, founded in India, approaches the US market at a valuation of almost $9 billion, according to the filing, making it the most valuable SaaS startup from India, ahead of application program interface (API) development platforms like Postman, recently valued at $5.6 billion and mobile application testing platform, BrowserStack valued at $4 billion this year.

Freshworks, which functions with two headquarters in San Mateo, California and Chennai, has most of its technology and operations team based in the country. Morgan Stanley, JP Morgan, BofA Securities, Jefferies and Barclays, among others, have been hired to manage the share sale.

In an earlier report, Mint had said that Freshworks was aiming to use the proceeds from the IPO for general corporate purposes, including working capital needs, operating expenses and capital expenditures. It is also expected to use a part of the net proceeds for acquisitions or strategic investments in complementary businesses, products, services or technologies.

Freshworks will be the first to flag off a spate of Indian startups, who are keen to list on the US exchanges in the coming months, such as payments service provider Pine Labs, Walmart-owned online retailer Flipkart and mobile advertiser InMobi.

Freshworks has raised more than $327 million in funding so far from Accel, CapitalG, Sequoia India, and Tiger Global Management. It has more than 52,500 customers across 120 countries and more than 50,000 companies use the company’s SaaS.

According to Arun Natrajan, founder of Venture Intelligence, the IPO from India’s first SaaS unicorn will make investors more confident in the India SaaS model and raise visibility for the sector among global customers.

In a letter, which is part of the IPO filings, Freshworks’ CEO and co-founder Girish Mathrubootham said that their company has been unconventional from the beginning, not for its own sake, but because they had seen an opening in the market for a unique approach.

“ We offered a ‘fresh’ approach relying on efficient, product-led, low-cost, and low-touch sales; and we targeted massive, underserved markets. And we had one simple mantra: happy employees create happy customers. In fact, we made that our mission,” he said, reported Mint.

Meanwhile, a Business Line article reported that the CEO and co-founder Girish Mathrubootham’s love and admiration for actor Rajinikanth prompted him to code name  the IPO as Project SuperStar.

“I want to express my love and gratitude to him for being my ‘maanaseega guru‘. There is no comparable English word to express what this means. It is a mentor; a role model that lives in your mind, from whom you learn a lot by watching from afar. The Superstar is a man who is loved and worshipped by millions of fans globally. He is immensely successful yet humble and down to earth. Thank you, Thalaivaa!” Mathrubootham said in the IPO filing.