For the first time, India has made it to the top 40 countries on the Global Innovation Index 2022 (GII) by the World Intellectual Property Organization (WIPO). India has jumped six places to 40 from last year, when it was ranked 46th in 2021.

The Global Innovation Index 2022 captures the innovation ecosystem performance of 132 economies and tracks the most recent global innovation trends. 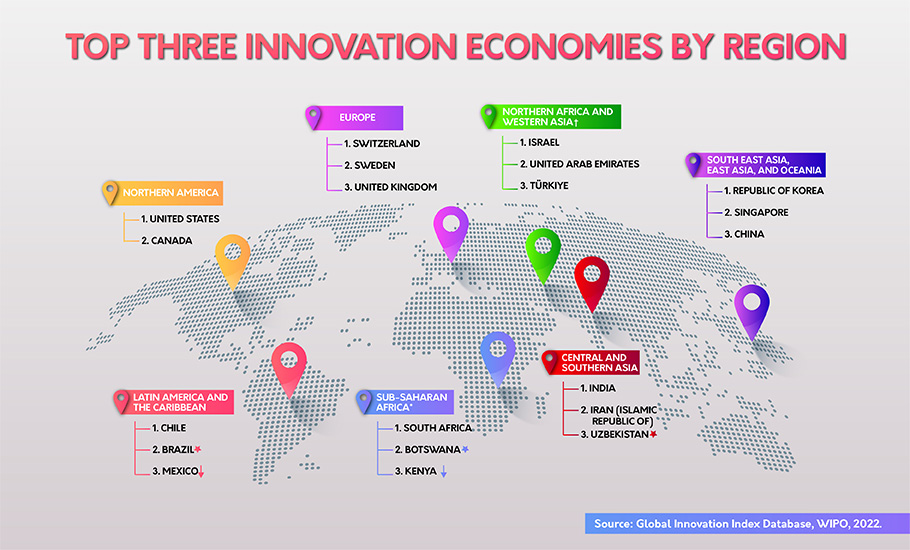 “India overtakes Vietnam as leader of the lower middle-income group. It continues to lead the world in the ICT services exports indicator (1st) and hold top rankings in other indicators, including Venture capital recipients’ value (6th), Finance for startups and scaleups (8th), Graduates in science and engineering (11th), Labour productivity growth (12th) and Domestic industry diversification (14th),” it added.

According to the report, India’s innovation performance is above average for the upper-middle-income group in almost every innovation pillar, with the exception of Infrastructure, where it scores below average.

On the GII 2022, 26 countries are outperforming on innovation relative to their development, including newcomers Indonesia, Uzbekistan and Pakistan. India, Kenya, the Republic of Moldova and Vietnam hold the record by outperforming for the 12th year in a row.

For the 12th year in a row, Switzerland is ranked first on the GII 2022. The United States climbed to the second position. Then comes Sweden, which is followed, in turn, by the United Kingdom, the Netherlands and the Republic of Korea.

China moved up to 11th place, overtaking France, and for now, it firmly remains the only middle-income economy within the GII top 30. No change to China’s exceptional position among middle-income economies is currently in sight, unless Türkiye further progresses fast, stated WIPO.

China now has the same amount of global top science and technology (S&T) clusters as the US. In 2022 – as in previous years – the top 100 S&T clusters are concentrated in three regions – Northern America, Europe and Asia – and in two countries especially: China and the United States, the report said.

As per the report, Sao Paulo (Brazil); Bengaluru (ranked 96), Delhi (99), Mumbai (100) and new entrant – Chennai (97); Tehran (Islamic Republic of Iran); Istanbul and Ankara (Turkiye); and Moscow (Russian Federation) are the only clusters from middle-income economies beyond China. Ankara and Istanbul (Türkiye) and Mumbai (India) have increased their ranking considerably.

Reacting to India’s jump in GII 2022, Prime Minister Narendra Modi tweeted, “Innovation is the buzzword across India. Proud of our innovators. We’ve come a long way and want to scale even newer heights.”

Innovation is the buzzword across India. Proud of our innovators. We’ve come a long way and want to scale even newer heights. https://t.co/Fa82TmmnLc

Union minister for commerce and industry Piyush Goyal said that India had come a long way in the GII from the 81st spot in 2015 to the 40th spot in 2022 today.

“We were 46 last time the ranking was done. We have also maintained 1st rank in ICT services exports over the years,” he added.

The minister said that GII has established itself as a tool for governments across the world to reflect upon policies and their impact.

“GII has over the years recognised India’s continuous rise due to the progressive measures taken by the government and industry working hand in hand”, he added.

He said that India today aspires to take its ranking in the GII Index among the top 25.

“Using frontier technologies, Indian companies are making significant leaps in innovation. In so doing, they are making their contribution to the country’s socioeconomic transformation. Additionally, a startup culture has taken root across the country, positioning India as the third biggest startup economy in the world,” he added.