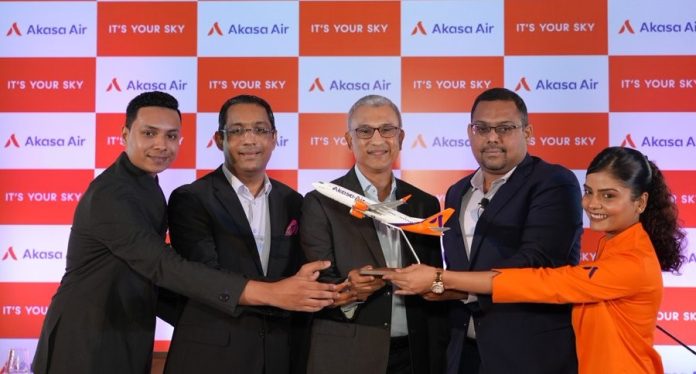 Akasa is a financially stable airline that can afford to add 72 planes to its fleet over the next five years, said Vinay Dube (centre), CEO of the airline. Image: Twitter/@AkasaAir

The country’s newest airline, Akasa Air, was expected to face turbulence in its operations following the sudden demise of its co-promoter and perhaps its biggest cheerleader, Rakesh Jhunjhunwala, in August.

But the airline has managed to not only steady its operations but has also increased its network. Last week, it opened its ninth route, launching operations from Bengaluru to Pune, growing its market share to within a touching distance of 1 per cent.

If one takes into account its rapidly increasing passenger load factor (PLF), the airline seems to be headed in the right direction, even if its market share appears rather small now. Akasa’s market share was about 53 per cent in August but has increased to 81 per cent since then. 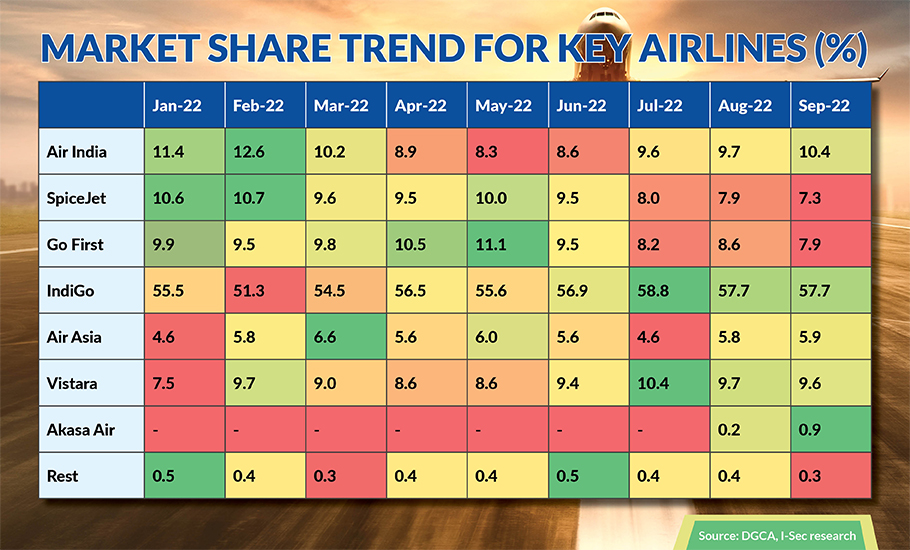 This indicates that eight out of every 10 tickets available on Akasa Air flights were occupied over the last quarter. This has not been the case with a few other airlines. The market share for SpiceJet and Go First fell to 7.3 per cent and 7.9 per cent in September 2022, respectively, a decrease of 60 and 70 basis points from the previous month. For the fourth month in a row, SpiceJet lost market share.

Simultaneously, all airlines saw a little rise in PLF, with the greatest sequential improvement at Akasa Air and Tatas-owned Air India. 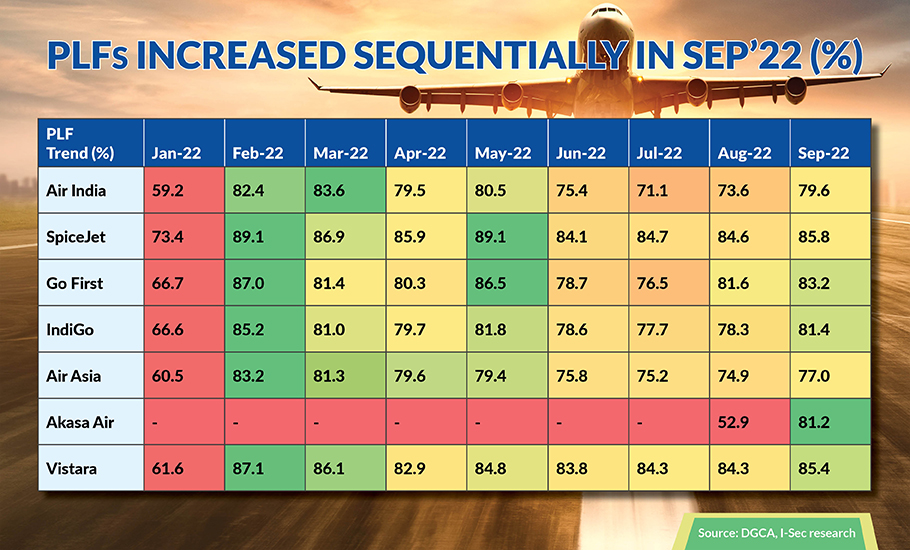 Since commencing operations in August 2022, the airline has been steadily expanding its route network and adding at least one aircraft to its fleet every month. Perhaps the most difficult part, like any new airline, was the selection of an Airbus or Boeing for the airline.

Picking Boeing MAX over the popular Airbus may have surprised the market, given the poor track record of the aircraft. However, after carrying out necessary changes in the aircraft like tweaking the Manoeuvring Characteristics Augmentation System, known as MCAS, and wiring reconfiguration, it is back in circulation with more orders than earlier.

Typically, the B737 MAX8 carries a higher payload, more cargo and more thrust power than the competition. It can also be reconfigured into a 200-seater variant. One assumes these and other considerations must have tilted Akasa Air’s decision to go for Boeing.

Also read: Jet Airways revival not happening in a hurry despite promising signs

The airline placed an order for 72 aircraft, one of the largest in recent times, with 18 of these expected to be inducted into the fleet by March 2023. As of now, the airline now operates nine Boeing B737 MAX8 planes. It said in August that it would add one plane every two weeks and a new hub.

“Akasa Air is a financially stable airline that can afford to add 72 planes to its fleet over the next five years. Because of the solid foundation we’ve built, Akasa will be able to place an aircraft order in the following 18 months, which is far greater than our first. In a nutshell, we’re expanding,” stated Vinay Dube, CEO of the airline.

Akasa also aims to launch its sixth and seventh daily flights between Bengaluru and Mumbai soon, bringing the total number of flights between the two metropolises to seven.

The airline has also chosen Bengaluru as its main hub, just like Air Asia India. From there, it operates 20 daily flights to seven destinations — Mumbai, Ahmedabad, Delhi, Chennai, Kochi, Guwahati, and Pune. Now, Bengaluru will be home to seven of its aircraft out of the nine planes, while two will be based in Mumbai.

Unfortunately for the airline, a few months after its launch, it faced a supply chain problem. It recently said some of its Boeing 737 MAX aircraft would have 174 seats instead of 189, but this could lead to a situation where certain flight schedules have to be reconfigured to ensure that those with the maximum number of seats end up on popular routes.

As per the new modification, certain aircraft will have the front three rows in a 2X2 configuration. Some of these seats will not have USB ports, and the upholstery will be in a different colour than the purple scheme. The airline will charge ₹2,500 for these seats, and for the rest, it will continue to charge ₹1,500 for seat selection though all these levies are optional.

Dube clarified that the current modifications would not impact the company’s business strategy. Therefore, the airline is expected to be on track with launching international flights next year when it reaches the 20-aircraft mark as per regulatory requirements.

Despite these hiccups, Akasa Air’s initial growth phase has been steady. What it needs is to sustain the momentum to gain a higher market share over a period of time.