Capitalism may be the greatest engine of prosperity and progress devised by humankind, but, in recent years, many individuals and communities have been angered by its current form that focuses on profits and shareholder wealth by running roughshod over the greater imperative of larger good, giving rise to demands to reimagine the concept.

Fifty years ago to date, Milton Friedman introduced a theory in his 1970 essay for The New York Times, titled ‘A Friedman Doctrine: The Social Responsibility of Business is to Increase Its Profits’, in which he said a company has no social responsibility to the public or society and its only responsibility is to its shareholders, the investors. “There is one and only one social responsibility of business — to use its resources and engage in activities designed to increase its profits,” he wrote in the essay.

The Friedman doctrine has been very influential in the corporate world. It has also attracted its fair share of criticism. COVID has intensified many of those criticisms and sharpened the awareness that when a business focuses only on enriching investors, it views the interests of customers, employees, communities and the fate of the planet as just a little more than “trade-offs” in a balance sheet-related game.

Related News: As India’s GDP slides, worse is still to come for the economy

Adam Smith, the Scottish economist and philosopher, who laid the foundations of classical free-market economic theory, believed that humans have a “natural and appropriate concern” for the well-being of others. This leap of faith was the foundation of his vision of a market self-organised by mindful individuals who act for the well-being and happiness of others. Smith and the political economists who followed in his tradition developed an elegant theory of the market’s capacity to self-organise for the common good as long as it fulfilled a few carefully articulated conditions:

These, according to Smith, were the characteristics of a real market economy. Smith was not an advocate of laissez-faire and never did he oppose state intervention in markets. Indeed, he advocates a range of them, from specific forms of taxation to the regulation of banks.

But in the context of COVID and K-type recovery that economies are seeing, the businesses’ version of capitalism has systematically violated each and every single foundational market principle. These businesses have leveraged their political power to rewrite our laws (regulatory capture) to facilitate the violation of each foundational market principle.

In his analysis of the Great Depression, former US Federal Reserve chairman Alan Greenspan wrote that when business underwent a mild contraction, the Federal Reserve created excess credit to forestall bank reserve shortage, which triggered a “fantastic speculative boom” in the stock market. “ Federal Reserve officials attempted to sop up the excess reserves. But… the speculative imbalances had become so overwhelming that the attempt precipitated a sharp retrenching and a consequent demoralising of business confidence. As a result, the American economy collapsed.”

In 2020, in a post-COVID world, it would seem that history is repeating itself. Our financial markets are touching newer highs driven by huge liquidity coming from the COVID stimulus packages intended to help businesses, creating a false sense of security on what the future holds for us as a collective, even as many lose jobs, face pay cuts and sink into poverty.

The spike in equity markets has led many to confuse “phantom financial assets” with the real wealth for which they can be exchanged. Those benefiting from this creation of “phantom wealth” may not realise that Wall Street players and their global counterparts in financial markets have generated total “phantom-wealth claims” far in excess of the market value of all of the world’s real wealth, thus creating expectations of future security and comforts that are bereft of common sense, expectations that can never actually be fulfilled!

Capitalism needs to be ‘redefined’

Capitalism (pro-business) in the current form aims for monopolistic control to defeat the market’s built-in corrective mechanisms. This means that the common good as envisaged by Smith is not served, and that there is a need for a strong and visible hand of an “intrusive government” that should limit the abuses and clean up the mess.

“When markets are no longer held in check by governments that can police the rules of the game, appropriately control externalities, or provide the public goods necessary to support real opportunity, they become too powerful for their own good. The chaotic and uneven pandemic response we are experiencing today flows directly from 30 years of treating government as something that should be ‘drowned in the bathtub’,” writes economist and Professor Rebecca Henderson in an article titled on “Reimagining Capitalism in the Shadow of the Pandemic” on the HBR.

Related News: Education disruption due to COVID to cause economic loss: OECD

Do we need to then re-examine these ideas and reimagine Capitalism?

It’s time to re-examine and radically revise beliefs about what a business is for and whose interests it serves and how it can create “value”, she says. The urgent need is a new form of capitalism for the highly interconnected 21st century, a form of political economy that is dedicated to the promotion of greater well-being rather than the narrow single-minded pursuit of growth and profits. We need an economic thought that doesn’t sacrifice the future for the near term. A kind of thought that regards every stakeholder and most importantly one that holds our leaders accountable for all of the consequences of their actions. We need a form of profoundly principled capitalism that is compassionate and socially accountable.

Omidyar, the California-based philanthropic investment firm, posted a 13-page presentation on Monday, calling for a more inclusive and cooperative form of capitalism to take hold in the United States in the context of the present climate. ”50 years ago this week, Milton Friedman wrote that the social responsibility of a business is to increase its profits. 12 years ago this week, Lehman Brothers collapsed. This September, let’s recognise that capitalism can be a powerful force for good, but only if it’s (re)structured properly and its purpose reimagined. It’s time to #ReimagineCapitalism, and build a more inclusive and equitable economy for all,” wrote Michael Kubzansky, CEO of Omidyar Networks on his Linkedin timeline.

The philanthropic investment group created by eBay’s founder Pierre Omadiyar, who, according to Forbes is worth $17 billion, hopes to convince business leaders and policymakers that it’s time to “reimagine capitalism”.

“We believe a reimagined capitalism and a new economic paradigm must place individual, community, and societal well-being at the center, enabling everyone to meaningfully participate in our economy, democracy, and society… We must continue to incentivize and reward individual accomplishment and enterprise. But we must equally ensure that people who have been historically and systematically marginalized by structural racism, colonialism, paternalism, and indifference will have opportunity, power, and the self-determination that comes from economic prosperity and a vibrant, fair, and responsive democracy,” the presentation says.

In what can be  considered as a blueprint on the future of capitalism, the document calls on investors to start taking a seemingly more progressive and inclusive approach to understanding capitalism. “We must reimagine capitalism itself – for the benefit of the many, and not just the privileged few. It’s possible, but only if as a society we leverage this moment to address what we at Omidyar Network hold to be the five pillars of change needed in our economy.” 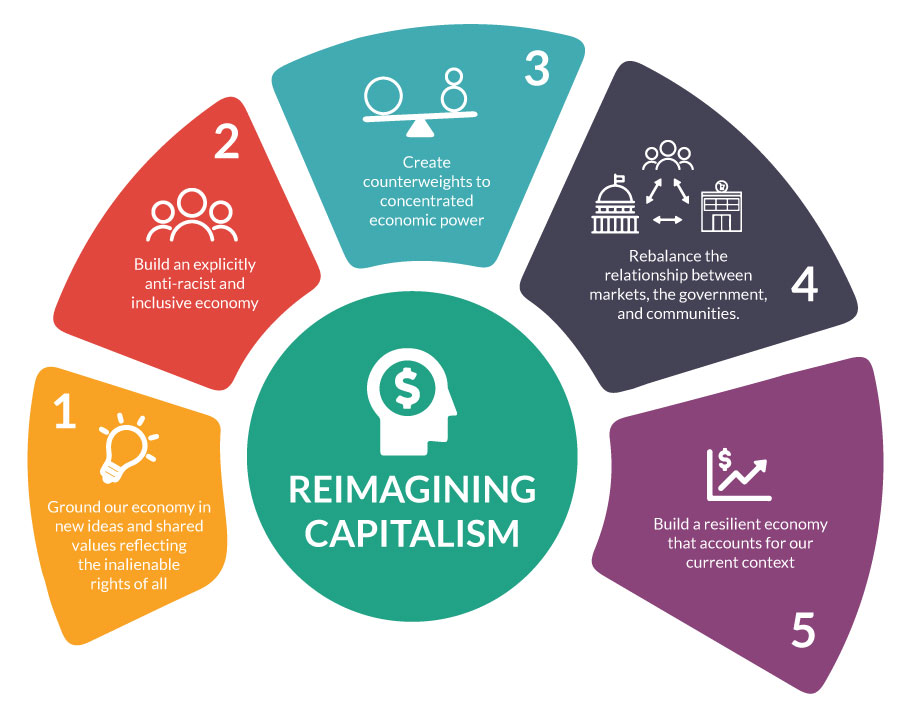 The paper concludes: “A reimagined capitalism is not only worth investing in, it’s an urgent necessity… We hope you will join us on this important journey – one determining the future of our people, our planet, and our democracy, for the benefit of all.”

One can only hope that when the crisis caused by COVID settles, we will reach a new normal in which we will seriously examine the trade-off between the powers of the free market and the powers of competent and compassionate governments.