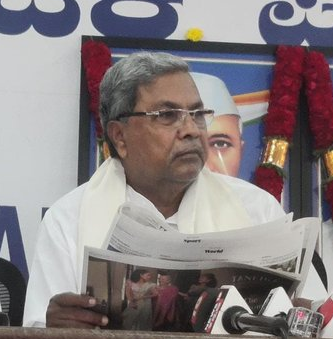 Siddaramaiah is locked in a high-decibel daily battle with the Sangh Parivar, which projects him as “anti-Hindu”. He is their pet hate and he, in turn, names and blames RSS routinely. Image: Twitter/ANI

Siddaramaiah, considered the most popular politician in Karnataka, is struggling to find a safe seat for himself. The man, who can fetch votes in every constituency of the state, has been searching for a winnable seat for many months now. He says that he has shortlisted three constituencies but is yet to make up his mind.

With a dedicated following of backward castes and minority groups, Siddaramaiah can draw about 10-15 per cent of the state’s votes, according to estimates. He hails from the socially diverse and geographically spread Kuruba community, which constitutes the third-largest social group in the state, after the Lingayats and Vokkaligas.

Also read: Rocked by sex scandals at mathas, Lingayats seek to rein in their seers

Kurubas, constituting 8 per cent of the state population, are utterly devoted to their leader and vote for him en masse.  Siddaramaiah’s unflinching secular stance has also earned him the unwavering support of Muslims, who are a little below 13 per cent of the population. His social justice plank draws support from sections of non-Kuruba backward classes and Dalits as well. He is a chief minister of choice for the vocal groups of progressive intellectuals and Kannada activists.

Siddaramaiah gets a frenzied reception from his supporters. They mob him like a film star and take time to calm down before letting him speak.

But his overpowering presence is as polarising as the Sangh Parivar he loves to target. Wherever he may contest from, the upper and dominant caste votes tend to consolidate against him. The Lingayats, the Vokkaligas, the Sangh Parivar and political rivals —  from within and outside the Congress —  make a common cause to bring him down.

His electoral woes started after he gave up the secure and tested Varuna constituency to his son in 2018. Though a popular chief minister, a shaky Siddaramaiah contested from two constituencies in South and North Karnataka. In Chamundeshwari, he lost by over 35,000 votes, and in Badami, he scraped through with a slender margin of 1,699 votes.

Stung by the humiliating setback, he is anxious to make a safe landing in the 2023 elections.

The opponents, who usually suffer Siddaramaiah’s rustic humour – he likes to call many of them ‘dumb’ – are relishing his embarrassment. For a change, the man who likes to answer back with a swagger is on the defensive.

It was over a long, tumultuous career marked by ideology, ambition and an ability to ram through opponents that Siddaramiah learnt to provoke extreme emotions.

In 1983, Siddaramaiah, a 36-year-old lawyer from a poor backward caste family, contested an assembly seat in Mysuru from a little known political outfit. Riding on a historic wave that swept away the Congress for the first time after Independence, he pulled off a sensational win.

He caught the eye of then Chief Minister Rama Krishna Hegde of the Janata Party, who mentored the spunky lawyer to balance the dominant caste tilt in his government. The rookie MLA joined the Janata Party, and barely two years into his political career, was managing different ministries including Transport.

Barely a decade later, Siddaramaiah who was on fast-rack, became state Finance Minister and then Deputy Chief Minister as well. As Finance Minister, he would go on to present 13 budgets in different governments, gaining an enviable grip on governance and establishing himself as a backward class heavyweight.

When the Janata Dal (which he joined in 1988) broke up in 1999, he shifted to Janata Dal (Secular) headed by his mentor Hegde’s bitter rival Deve Gowda. A staunchly secular person, Siddaramaiah refused to join Hegde and the other Janata faction, which joined the National Democratic Alliance (NDA) under BJP.

Under Siddaramaiah and Deve Gowda, the JD(S) turned into a formidable political machine, which could lure the Vokkaliga, backward caste and minority votes. Siddaramaiah  again became a Deputy CM in a coalition government with the Congress and started overshadowing Deve Gowda’s sons, much to the family’s discomfort. To sideline him, HD Kumaraswamy started dealing with JD(S) MLAs directly and would even summon them for policy sessions, ignoring Siddaramaiah.

Sensing trouble, Siddaramaiah attempted to consolidate his position by putting together a rainbow coalition of backward castes and Muslims under Ahinda, a Kannada acronym for minorities, backward classes and Dalits.

The power struggle escalated and he was dropped from the ministry along with two confidants. HD Kumaraswamy also pulled down the Congress-led government and formed a coalition with the BJP.

Siddaramaiah’s dismissal created a sympathy wave for him among backward castes, especially Kurubas, who rallied behind him. Madan Gowda, a senior official of Karnataka Pradesha Kurubara Sangha, said: “Kurubas are emotionally attached to Siddaramaiah as they have never had strong political leadership. When they saw that he was under attack they rose in his defence to save him.”

The number of JD(S) MLAs came down from 58 to 28 between 2004 and 2008 following Siddaramaiah’s exit. The party also transformed into a Vokkaliga pure play and a Deve Gowda family fiefdom.

Siddaramaiah moved to the Congress, and in just seven years, led the party to power in 2013. His assured backward class votes and the dare with which he took on the notorious miners, the Reddy brothers, caught the imagination of the people and catapulted him to the top.

Chief Minister Siddaramaiah, in his tenure, launched popular and well-administered welfare programmes, including a ₹1 rice scheme. He also consolidated his Ahinda base with generous budgetary grants to backward groups and minorities.

Before the rise of Siddaramaiah, Muslims used to vote for the Congress and Deve Gowda, who had helped them gain 4 per cent reservation as chief minister. They, however, moved away from the JD(S) after Deve Gowda’s son joined hands with the BJP. The community that was also unsure of Congress’ ideological moorings consolidated behind Siddaramaiah whose secularism was consistent and outspoken.

As CM he launched Shadi Bhagya, a hugely popular scheme to help poor Muslim families marry off their daughters.  His government also started celebrating Tipu Jayanti in 2015, braving a storm of protests unleashed by the Sangh Parivar.

Professor Muzaffar Assadi of Mysore University said: “He is the only Congress leader who speaks up for Muslims consistently. More than anything, he tries to ensure the physical security of Muslims, most of whom live in the slums. It is a big deal for them.”

“He has not done much to improve the political representation of Muslims, but he has the confidence of the community. More than the Congress, Muslims vote for Siddaramaiah,” he added.

Also read: 2023 Karnataka polls: BJP goes all out to woo Vokkaligas and OBCs

Siddaramaiah is locked in a high-decibel daily battle with the Sangh Parivar, which projects him as “anti-Hindu”. He is their pet hate and he, in turn, names and blames RSS routinely.

This June, Siddaramaiah gave a call to burn chaddis or knickers to protest against the RSS, whose members are known for their khaki shorts, provoking an angry response from the Parivar. Recently, when the Centre banned the Popular Front of India, a Muslim organisation, Siddaramaiah called for a ban on the RSS as well.

Siddaramaiah’s intense political rivalry extends to the dominant castes, who oppose the backward castes eating into their political space under him. The Vokkaligas, in particular, who have coalesced around the JD(S), are affected by the Deve Gowda family’s blood feud with him.

HD Kumaraswamy spends more effort in targeting Siddaramaiah than the ruling BJP, earning JD(S) the epithet ‘Opposition’s opposition.’  It was the anger of Vokkaligas, a third of the voters in the Chamundeshwari constituency, that gave Siddaramaiah the biggest thrashing of his life, in 2018.

The Lingayats do not have any bitter conflict with him, but they also strongly feel that he promotes backward castes, especially Kurubas, at their expense. In addition, they commonly complain that they find Siddaramaiah’s bluster and mannerism offensive. He speaks with a touch of confidence or arrogance, depending on one’s point of view, and frequently addresses even senior leaders in the singular without any honorifics.

What offends the upper caste sensibilities of Lingayats is music to his followers, who read his swagger as coming of age of the backward castes. “Siddaramaiah’s followers like his charisma, confidence and the way he speaks. He is an inspiration for them,” said Madan Gowda.

But the support base for a leader, who has taken on the powerful dominant castes, has not panned out as envisaged. Siddaramaiah’s attempted rainbow coalition of the oppressed sections has stopped at mostly Kurubas and Muslims.

The non-Kuruba smaller backward castes are either split between parties or are responding to BJP’s social engineering calls.  A former senior bureaucrat from the Devangas, a noted backward group, said his community lacks good leadership and is split between all parties.

“The emerging leadership leans towards BJP as that is where the power is,” he observed.

The Valmikis, the most numerous Scheduled Tribe community, were put off by the Tipu Jayanti celebrations. They oppose idolising the Sultan, who had vanquished Madakari Nayaka, a mediaeval chieftain revered by them.

The BJP has wooed Valmikis successfully and, with the recent hike in reservation for the community, has rallied behind the party. Dalit politics has its own drivers and is split into pro Congress and pro BJP groups.

Siddaramaiah’s first hurdle to power is to find a constituency from where he can win. His massive vote bank is scattered across the state and vulnerable to counter mobilisation.

He is popular with the people of Badami, which has been showered with government grants. But a popular Congress leader, who had earlier vacated the seat for Siddaramaiah, wants it back. The thin majority with which he had won the seat in 2018 makes Siddaramaiah vulnerable to internal dissent.

He is also reportedly considering Kolar, which has substantial Muslim, Kuruba and other backward caste voters. But Siddaramaiah faces the opposition of Varthur Prakash, a former associate, who is now with the BJP. Prakash, a fellow Kuruba, is a three-time MLA and can split the community votes. The Congress is split into factions in the district and former central minister KH Muniyappa has dropped hints that Siddaramaiah will not have a smooth ride in Kolar.

There are other Congress leaders who may like to settle a score with Siddaramaiah or remove him from the race to become chief minister if the party wins.

Varuna, where Siddaramaiah’s son won from 58,000 votes in 2018, is relatively safer. But the constituency has substantial Lingayat voters, who have stayed loyal to the Congress so far. But they may waver if a high-pitch mobilisation takes place to contain Siddaramiah.

If the Congress wins a comfortable majority in the 2023 elections, Siddaramaiah would be a frontrunner to become the next chief minister. He is locked in a power struggle with the state unit president, DK Shivakumar, a powerful Vokkaliga leader, who is also very resourceful. But Shivakumar is weighed down by legal woes and is in the crosshairs of the Enforcement Directorate and the Income Tax department.

But many expect the next state assembly to hang rather than produce a stable government. There is anti-incumbency against the BJP government, which is tainted by corruption charges and instability. But the party has a loyal vote bank and resources to put up a good fight.

If no party wins a majority, the small bunch of JD(S) MLAs would hold the key to the next government. And Siddaramaiah may have to watch history repeating itself from the sidelines.