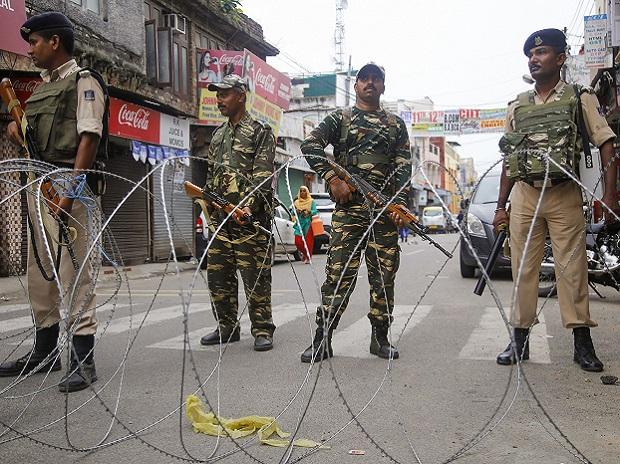 Amid the rising instances of attacks on religious minorities in the Valley, Union home minister Amit Shah in his recent visit to Srinagar, reportedly expressed his concern over the targeted killing of civilians.

On February 18 this year, Akash Mehra was shot at by three militants outside his family-run eatery – Krishna Dhaba – in a high-security area of Srinagar. Ten days later, Mehra, just 22 years of age, succumbed to his injuries while undergoing treatment at the SMHS Hospital.

The shootout triggered panic in Srinagar but few saw it as a breach of status quo in a paradise that’s long been drowned in the blood of its inhabitants. Muffled voices among local Hindus, a religious minority in Muslim-dominated Kashmir, of the attack on Mehra – or the gunning down of Srinagar-based jeweller Satpal Nishchal on December 31, 2020 – being reminiscent of the dark days of the early 1990s that saw militants targeting Kashmiri Pandits in the Valley, have been loudly dismissed by the recently carved Union Territory’s administration as panic-mongering.

Yet, some nine months later, amid rising instances of attacks on religious minorities in the Valley, when Union Home Minister Amit Shah arrived in Srinagar, on October 23, for his maiden visit to the UT ever since he piloted the abrogation of Article 370, he reportedly expressed his concern over “targeted killing” of civilians.

In a security review of the region, Shah is learnt to have directed the Unified Command that “protection of minorities” against militants in Kashmir must be a priority area.

Over the past month, 11 civilians were killed by militants in Kashmir. For the average Kashmiri – for decades, a collateral casualty in equal measure of terrorists, Indian security forces and a politics that breeds corpses, widows, half-widows and orphans – this toll may seem like a blip in the Valley’s seemingly infinite graveyards.

But, in adjoining Jammu, these killings, or rather the identity of the victims – Kashmiri Pandits, six ‘non-locals’, Hindus, Sikhs, migrant workers from distant Uttar Pradesh and Bihar – have stoked a veritable cocktail of emotions.

A sense of déjà vu; of fear and loathing, of shock and outrage. Perhaps, most importantly, the killings evoke a sense of betrayal by a political party and its government that made lofty promises of restoring peace, rehabilitating Kashmiri Pandits to their long-lost home and hearth, ending terrorism and ushering in unprecedented development after the abrogation of Article 370.

Soon after Parliament stripped J&K of its special status under Article 370, on August 5, 2019, and Shah proceeded to announce the surgical dismemberment of the state into two separate UTs – J&K and Ladakh – saffron spin doctors had got down to the job of emphasising the great advantages that the decisions portend for the people of Jammu.

While the abrogation sank Muslim-majority Kashmir into stunned silence, the Hindu-dominated Jammu was euphoric. From a real estate boom to peaceful existence, infrastructure revolution to socio-economic prosperity – the moon was promised to Jammu.

Yet, on October 24, when Shah flew into Jammu from Srinagar and rattled out ‘achievements’ of the Centre vis-à-vis J&K – 21 schemes, ₹55,000 crore special package, new medical colleges, breaking the seven decade-long political hegemony of “three families”, his high-decibel rhetoric failed to revive the frenzy Jammu witnessed in the days after the abrogation.

“Contrary to BJP’s claims and promises the sense of fear among Jammu’s Hindus has increased with the spate of targeted killings (witnessed over the past year),” Jammu-resident Jatinder Kumar tells The Federal. The killings of Makhanlal Bindroo, Jammu-resident Deepak Mehra, Satinder Kour, Arvind Kumar Sah in recent weeks – or those of Satpal Nishchal and Akash Mehra earlier – may have happened in Srinagar but their reverberations are felt more strongly in Jammu.

“People from Jammu will think twice before visiting the Valley now,” Kumar says.

Much before the Modi government abrogated Article 370; terrorism was believed to have been wiped out from the Jammu region. Now, even as the Modi government hard sells its narrative of normalcy, the rise in terrorist activity in Jammu’s border districts of Rajouri and Poonch is indisputable. In fact, the day Shah arrived in Srinagar, an encounter between militants and the security forces had been going on for 11 consecutive days in the forest areas of Rajouri and Poonch and nine security personnel had lost their lives.

Since January this year, 10 terrorists have been gunned down in encounters in Rajouri and Poonch alone. In August this year, a three-year-old had died in a grenade attack at a BJP’s leader’s house in Rajouri district.

For the BJP, this increased terror activity in Jammu and its adjoining areas should have been a major cause of concern. The BJP had swept Jammu in the last Assembly polls held for the legislative assembly of the erstwhile state of J&K.

The party has been hoping that by abrogating Article 370, pushing in a series of new laws and notifications and ultimately implementing delimitation of constituencies in a manner that would decisively tilt the balance of power from Muslims of Kashmir to the Hindus of Jammu, it would consolidate itself as the dominant political player in the UT for years to come.

Ironically though, the BJP’s response to the resurgence of terrorist activity in Jammu’s neighbourhood and militancy that seems to be targeting Hindus and ‘non locals’ in the Valley, has been one of abject denial and apathy.

The party, which until five or six years ago, would hastily call for a Jammu Bandh whenever a Hindu or a Kashmiri Pandit from Jammu was killed in the state, has maintained a studied silence through the recent spate of killings. Expectedly then, a sense of disillusionment has been brewing against the BJP and its promises to the “Hindus of Jammu”.

“After the abrogation, the BJP had said: Kashmir mei ab chidi bhi nahi maari jayegi… ab toh rozana janaaze nikal rahe hain (even a sparrow will not be killed in Kashmir, now there’s a funeral procession everyday)… These killings are a slap on the face of the BJP,” says Harsh Dev Singh, former Panther’s Party MLA from Udhampur’s Ramnagar constituency to The Federal.

Public anger over the killing of Hindus, non-locals and Jammu residents working in the Valley has also led people to be more critical about other failures of the BJP and the UT administration, presently under Lieutenant Governor Manoj Sinha. An emerging sore point with Jammu residents is the new domicile law for the UT that the Centre had stealthily notified during the first COVID-induced lockdown in March 2020.

The BJP had hoped that these changes in the statutes would win it greater acceptance among the Hindus, Sikhs and rehabilitated Kashmiri Pandits in Jammu. Over a year later, it seems these measures are proving counter-productive; at least politically, while discordant notes in J&K grow over the delay in restoring electoral democracy and statehood for the UT.

The new domicile and tenancy laws were widely criticised by the Kashmiris as an attempt by the BJP to change the demographic profile of India’s only Muslim majority territory by allowing Hindu settlers to register as permanent residents and voters. The BJP’s spin doctors had succeeded in preventing similar resentment from growing in Jammu by telling the Hindus here that they stand to be the biggest beneficiary of this new normal.

However, over a year later, while restoration of electoral democracy still is a distant dream for residents of both Jammu and Kashmir, a new set of challenges has begun to emerge. The credit for Nishchal’s murder and the firing at Akash Mehra was taken by an outfit called The Resistance Force (TRF). Security forces in J&K claim it is a local proxy of the Pakistan-based Lashkar-e-Toiba.

Soon after the new domicile and tenancy laws were notified, the TRF had issued statements warning non-Kashmiris against seeking benefits under these laws. The TRF had said it would treat non-Kashmiris seeking residency under the new domicile law as “occupiers” and declared that “any Indian who intends to settle in Kashmir will be treated as an agent of the RSS (the BJP’s ideological parent) and not as a civilian and will be dealt with appropriately.”

Nishchal, a Punjabi who owned a jewellery shop in Srinagar’s Sarai Bal market, had reportedly acquired a domicile certificate under the new law and was helping other non-Kashmiris to apply for residency certificates too. The TRF had described Nishchal as “an active participant in the Demographic change and Settler Colony Project run by Hindutva fascists to alter the demography of Kashmir.”

The threat to their lives from outfits like the TRF aside, Jammu residents who either worked in the Valley or had ambitions of owning a piece of land in their neighborhood, now believe that while they have lost out on the stated opportunities these new laws presented, benefits have been accrued to a handful of rich people from outside J&K.

Jammu locals allege businesses of liquor and extraction of sand or other minerals have now been “completely taken over” by people from outside J&K. On September 22, the Jammu Chamber of Commerce had called for a Jammu Bandh to protest against ‘outsiders’ usurping what they believed was their first right. The BJP refused to support the bandh, slighting the businessmen in Jammu further.

Jammu-based senior journalist Ajat Jamwal tells The Federal that there are two aspects to the recent spurt in targeted killings of civilians in Kashmir. “First, the selective targeted killings are a counter-reaction by terrorists and their handlers to deflate the BJP’s narrative of normalcy returning to the Valley and secondly, it reflects the government’s failure in securing the interests of the people of Jammu,” points out Jamwal, adding that the BJP is trying to fool Hindus in Jammu with a fake narrative…

“Today, Jammu is feeling more disempowered than ever; revival of targeted killings was the last thing we expected and now this too has happened,” he says.

Old-timers in Jammu, who harboured a fondness for the BJP due to the affiliation of the RSS with the erstwhile Praja Parishad Party, have been becoming disillusioned as well. In the 1950s, long before the BJP – or even its earlier avatar, the Bharatiya Jana Sangh – took shape, it was the Praja Parishad, backed by the RSS, that had begun a campaign for the abrogation of Article 370. The campaign had found resonance within Hindu-dominated Jammu, which felt the Muslim-majority Valley was being extended unfair privileges.

A majority of the BJP’s early leaders in Jammu had come from the Praja Parishad, which had eventually merged with the Jana Sangh in December 1963. The Praja Parishad’s combative fight for the ‘rights of the Hindus of Jammu’, had, in later years, allowed the BJP to create a space for itself in Jammu despite formidable rivals from the Congress, the National Conference, or later, also the PDP.

Ironically, abrogating Article 370 may now well make the BJP a pariah in Jammu, if it fails to stem the chaos that has been fast spreading in the region over the past two years. The targeted killings of Kashmir’s religious minorities in the 1990s and the exodus of the Kashmiri Pandits (KP) has haunted the erstwhile state for three decades.

The recent spate of killings has brought back those memories but the trauma has been made worse by the BJP’s acts of omission and commission in governance and its habitual grandstanding on promises of restoration of normalcy, economic prosperity and equal opportunity. For Jammu residents, the promised land is quickly turning into one of broken promises.

The writer is a senior journalist based in Jammu