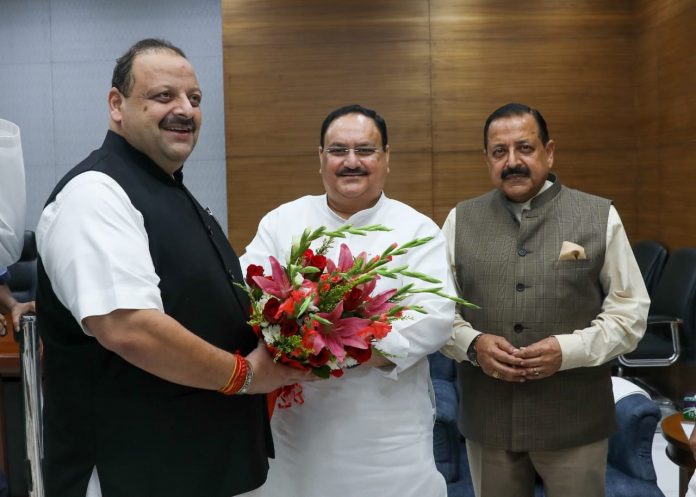 The National Conference (NC), the oldest political party in Jammu & Kashmir which was formed in the 1930s, is facing a series of setbacks. With two of its senior most leaders from Jammu — Devender Singh Rana and Surjit Singh Slathia —deserting the NC camp and then joining hands with the ruling Bharatiya Janata Party (BJP), the party’s ‘secular credentials’ have come under question in the Jammu region.

Worse, the NC leadership stands accused of being apologetic about voicing the political aspirations of the people on its home turf (the Kashmir Valley). The party faces stiff resistance from influential voices like that of former cabinet minister of J&K and three-time legislator, Agha Ruhullah Mehdi as well.

Devender Singh Rana, the three-time legislator representing the Nagrota constituency in Jammu Province, on October 11 shared pictures on social media of him formally joining the BJP. Interestingly, Rana is the younger brother of Union Minister of State, Dr Jitendra Singh and has served as the NC’s provincial president in the Jammu region.

Rana’s decision has come as a blow to the NC, as he was considered a personal friend of the former J& K Chief Minister and NC’s vice-president, Omar Abdullah.

“I along with S S Slathia (a former minister) resigned from the basic membership of the National Conference,” Rana told reporters in Jammu.

Senior leader Surjit Singh Slathia’s resignation, which the Jammu-based leader submitted to the party president, patron and former CM Dr Farooq Abdullah on Sunday (October 10), was another jolt to the NC.

However, there is an eerie silence in the NC camp. The party did not issue any elaborate or strong statement on the development. The statement, however, was short and simple: “Dr Farooq Abdullah has received and accepted the resignations of Mr Salathia and Mr Rana. No further comment or action is deemed necessary.”

After a week-long speculation that both Rana and Slathia would resign from the NC and join the BJP, the inevitable has happened.

Speaking to the media in Jammu, Rana unambiguously said that his political philosophy would be based on the so-called ‘Jammu Declaration’. In January this year, he had proposed the Jammu Declaration which talked about “forging unity and reinforcing trust between diverse communities and divergent regions of Jammu and Kashmir”.

The observers saw the Jammu Declaration as being a counter to the Gupkar Declaration — signed by the parties that are a part of the new amalgam called the People’s Alliance for Gupkar Declaration (PAGD) — which seeks the restoration of Jammu and Kashmir’s semi-autonomous status and statehood.

What is wrong with the NC? Why is the party losing its ‘stalwarts’ in Jammu?

Anuradha Bhasin, executive editor of the Jammu-based Kashmir Times and a noted political commentator, said that she was not surprised by the exit of Rana and Slathia from the NC. “Given the nature of manipulative politics in J&K under the current dispensation, the recent events do not come as a surprise,” she told The Federal from Jammu.

However, according to the veteran analyst, the decision taken by Rana and Slathia to join the BJP wouldn’t cost the NC and alter its fortunes. “In terms of optics, the BJP seems to have an advantage on Jammu’s political landscape. But, in terms of realpolitik, it could only mean a loss of one or two assembly segments, at the most, for the National Conference,” she added.

Rana is expected to retain his Assembly seat from Nagrota as he wields a lot of influence among the voters from both the Gujjar and Rajput communities. On the contrary, Slathia’s position in his home constituency, Samba, is not as strong as Rana’s hold over Nagrota.

Bhasin knows the Rana brothers through their association with her late father, Ved Bhasin, and the newspaper, ‘Kashmir Times’ she now edits and owns.

“Devender Rana, a businessman, was closely associated with my father in movements and campaigns to fight for consumer rights and to maintain communal harmony. That association continued even as he entered politics by joining the NC in the late 90’s. In the 2014 J&K assembly elections, he was the sole anti-BJP winner from Jammu’s Hindu majority belt and his vote-bank comprised both upper caste Hindus and Gujjars,” she wrote in one of her posts.

According to Bhasin: “In many personal conversations with him over the years, he (Devender Rana) revealed his commitment to the cause of secularism. He also came across as good-humoured, jovial, intelligent and affectionate — overall, a nice person to know. But he is a businessman first. Is it also a case of invisible hands trying to bring you to a breaking point?”

In Bhasin’s view, it seems there could have been some invisible pressure on Rana that could have coerced him to switch sides and loyalties at a critical juncture.

But why are several NC leaders in the Kashmir Valley also unhappy with the party’s leadership?

In May 2020, The Federal reported about a political tempest in the NC hinting at a possible split in the party.

Some political observers do draw parallels between the Indian National Congress and the NC in terms of dynastic politics and familial affiliations. Like the Gandhis are accused of remote controlling the Congress party, the NC too faces criticism of how the Abdullahs dominate party affairs and key decision-making processes.

For some in Jammu, the NC is not secular enough. But, on Kashmir’s turf, it is not considered Kashmiri enough by some of its own leaders.

Last year, Omar Abdullah’s private secretary Tanvir Sadiq in his article published in a Srinagar-based English daily, ‘Greater Kashmir’, called for “reconciliation” and “reaching out to the people of Jammu and Kashmir” without touching on the hot subject of abrogation of Articles 370 and 35 (A).

Mehdi, told The Federal that the exit of Rana and Slathia from the NC would mean “further polarisation of Jammu politics.” Furthermore, he argued, “this (resignations of Rana and Slathia) is a result of grooming irrelevant entities and who, in return, showed where they ideologically belonged (with the BJP).”

“This is also a case of appeasing and patronising irrelevant leaders at the cost of the people from the region who have offered sacrifices and services, and continue to stay committed and relevant for the cause which the NC originally stood for since its inception,” Mehdi told The Federal, adding that he was not hopeful that “the lessons will be learned from this (by the exit of Rana and Slathia).”

What Mehdi is perhaps referring to is the stance taken by the former CM of J&K, Sheikh Abdullah, against the autocratic Dogra regime, the Sheikh’s land-to-tiller reforms, the Quit Kashmir movement of the 1940s against the Maharaja (Hari Singh), and J&K’s semi-autonomous status etc.

Initially formed as Jammu and Kashmir Muslim Conference in 1931 during Maharaja Hari Singh’s Dogra rule in the region, the party rechristened itself to Jammu and Kashmir National Conference in 1939. The stated goal was to lend the party a secular outlook to accommodate the minority viewpoints. Traversing through many ups and downs, the party has been active on the region’s political landscape for over eight decades now.

The party, however, at present is fighting a battle for a narrative as its future actions or lack thereof will determine whether it stands at the precipice of irrelevance by hankering after power or stage a comeback of sorts with pro-Kashmir politics to safeguard the region’s unique identity.

According to Mehdi, “the silence of my party (the NC) on Article 370 and on the way forward” was disturbing. There are several other NC leaders who share Mehdi’s viewpoint, but do not gather enough courage to make their dissent known in the public domain. “What happened on August 5 last year was illegitimate murder of democracy in Kashmir. We were betrayed on that day,” Mehdi has said many times.

In the absence of a clear roadmap on the path ahead, Mehdi feels that his party can neither afford to surrender its principles nor compromise on the unique identity and culture of J & K. “This prolonged silence is proving counter-productive as the ruling BJP is implementing the RSS’s agenda in Kashmir and going ahead with its dangerous plans. The new domicile law is the proverbial last nail in the coffin,” he said.

“The axe forgets, but the tree remembers,” is Mehdi’s pinned tweet. The current significant development is pointing towards a much deeper crisis in the party.

Following the abrogation of Article 370, the former CMs Farooq Abdullah and Omar Abdullah remained under preventive detention under stringent Public Safety Act (PSA). After they were released, the duo refused to talk about the revocation of Article 370. While the senior Abdullah said that his party would talk politics only when all the political detainees were released, junior Abdullah then invoked the coronavirus pandemic and said that it was important to fight the pandemic first.

9:56 AM, 4 December, 2022 0
Rohit Sharma insists it’s too early to talk about World Cup, but it’s unlikely any ODI between now and next October will be viewed through any other prism than a means towards the end, which is World Cup