The Indian Railways have unveiled a blueprint that paints a rosy picture of the organisation, making its operations faster, cheaper and modern by 2024.

The avowed objectives would make India’s biggest transporter self sufficient to such an extent that it may not need the support of government money to sustain its operations.

The recipe released by the Railways last week called National Rail Plan or NRP seeks to provide a common platform for all Indian Railways’ future businesses, including infrastructure and financial plans.

The draft plan released by the railways ministry for wider discussions will be finalised by January 2021. 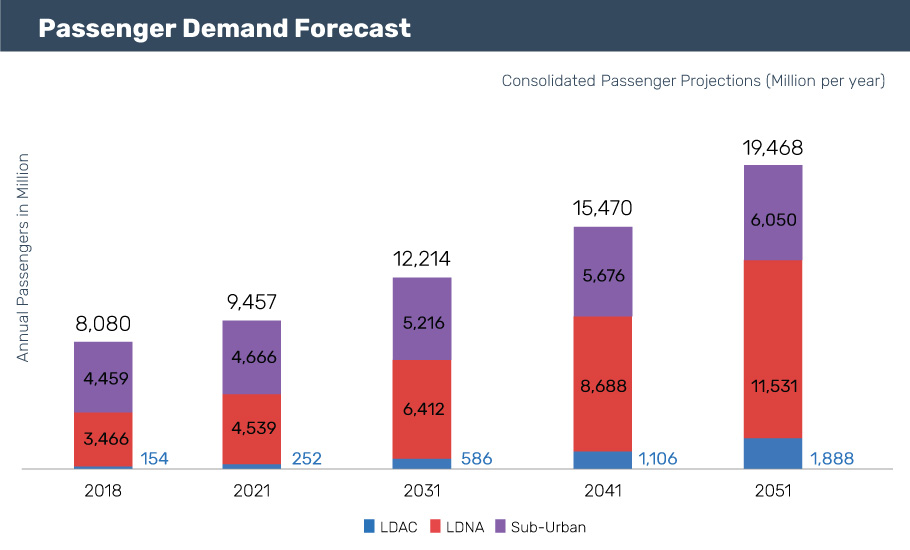 The plan being worked out for next few decades envisages a scenario where the average speed of the freight train will go up from present 22 kms per hour to 50 kms per hour. With a cut in transit time, the Railways intends to cut the overall cost of rail transport by 30 per cent. 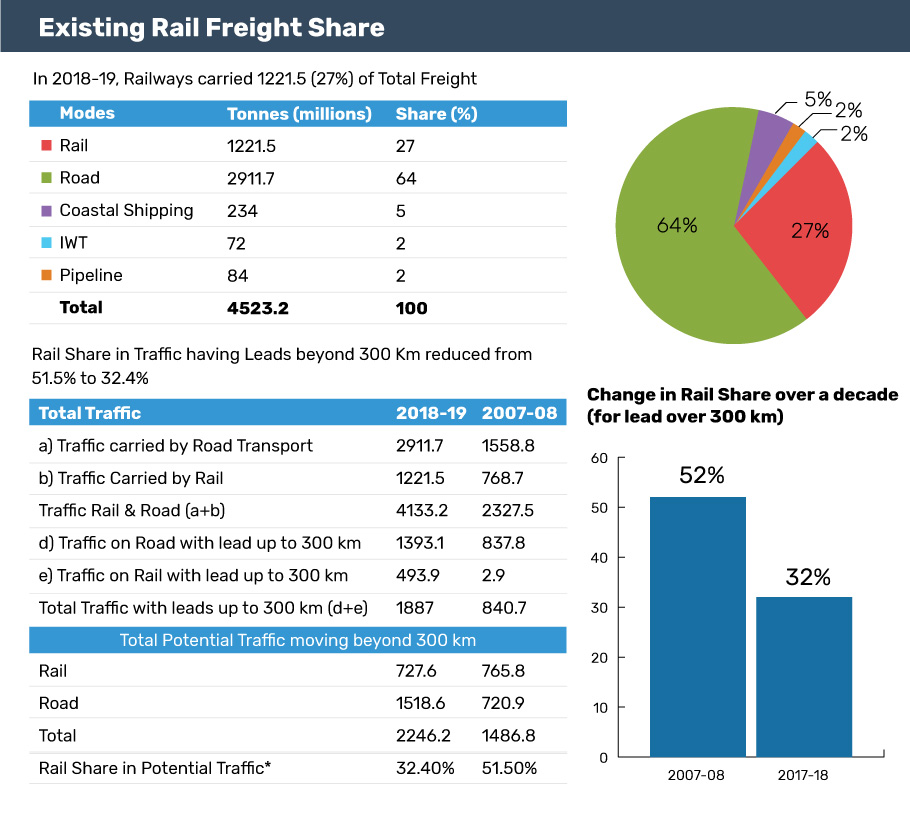 The NRP seeks to increase the share of railways in overall national transport business by competing with other modes of transport such as road and air. This looks ambitious as the railways have been gradually losing its share to the segments over the last few years.

The NRP has assumed that the Indian Railways would nearly double the number of passengers it currently carries and triple the freight loading in 30 years. In the next decade, the railways is targeting a 45% share of freight (up from 27% now) in the overall pie that includes all modes of transport. 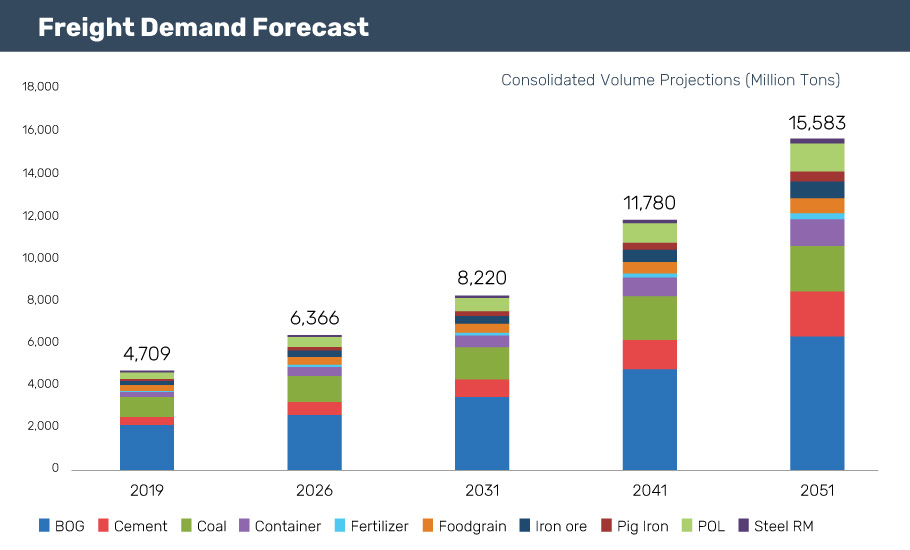 Interestingly, while the NRP is supposed to be a vision document, it doesn’t tell us how passenger numbers will rise exponentially in the coming years. At present, road transport and airlines are posing stiff competition for the railways in certain classes of travel. It also does not say what will induce such a dramatic change in the country’s freight movement – currently nearly 60% moves by road – beyond talking about tariff rationalisation and improving the speed of goods’ trains.

There is no explanation of how a drastic cut in tariff will affect the Railway’s goods earnings, and there is no mention of any increase in passenger fares. While privatisation is already underway in various aspects of railway’s functioning it only finds a passing mention in the draft plan. The NRP does not say how much the private sector would contribute to the railway’s workings or its bottom line.

The Railways is in the process of evaluating bidders for launching private trains and large railway stations are already being put up for significant private sector play. The NRP talks of private participation in existing goods sheds and terminals, and in wagon manufacturing.

It appears that the Railways, much like its annual earnings which routinely misses the mark, will also struggle to meet these lofty, long-term targets for passenger and freight traffic, earnings. It is clear that while the NRP is loaded with good intention and lofty targets, the path to achieve self-sufficiency for the Railways has not been clearly laid.

The draft paper says after 2030, the Railways may not require government’s budgetary support for incurring capital expenditures or Capex (for purchasing machine, plants etc) and funds for servicing debts incurred.

The Indian Railways’ finances have been worsening year-on-year during Prime Minister Narendra Modi’s regime with earnings consistently below annual budgetary targets. In 2015-16, the shortfall between the target and actual gross traffic receipts was a little over ₹19,000 crore; it was over ₹19,500 crore in 2016-17 and a little over ₹10,000 crore each in the next two fiscal years. In 2019-20, the shortfall was the highest at nearly ₹30,000 crore. And for this fiscal – where traffic has been crippled due to COVID-19 travel restrictions – the passenger business alone would fall short by about ₹38,000 crore over last year’s earnings.

Given these numbers, the targets in the NRP look a tad unreal. The Indian Railways seeks to increase its share in the overall transport business from 27 per cent to 45 per cent in next one decade. Railway Board Chairman VK Yadav has been talking about ‘freight rationalisation’ – or cutting the freight tariffs by one third and reducing expenditure on coal to achieve targeted growth earnings. Analysts wonder can the Railways achieve such rapid increase its share of freight only through these methods?

Manish Agarwal, Partner at PwC, says, “The Indian Railways has a critical role to play in improving competitiveness of logistics and therefore manufacturing. The NRP seems to assume that cost savings would be sufficient to solve the cross-subsidy burden on freight rates which would get tested over time.” At present, the earnings from freight are used to cross-subsidise the lower passenger earnings.

The Railways currently bears what is called “social obligation” costs where passenger fares are heavily subsidised (through myriad discounts and generally keeping fares lower than cost) and this sum has been hovering around the ₹40,000 crore. Therefore, this is the amount the freight earnings have to bring in additionally and that is why freight tariffs have been higher than those charged by other modes of transport like trucks.

The PRS analysis further shows that Railways’ expenditure on salaries have been gradually increasing. Between 2015 and 2020 (budget estimate), its expenditure on salary has grown at an average annual rate of 13 per cent. The expenditure on pension too has been going up and the pension bill may further increase in the next few years as about 40 per cent of the staff have already crossed the age of 50 years in 2016-17.

Record budget, but railways’ finances weighed down by big pens...