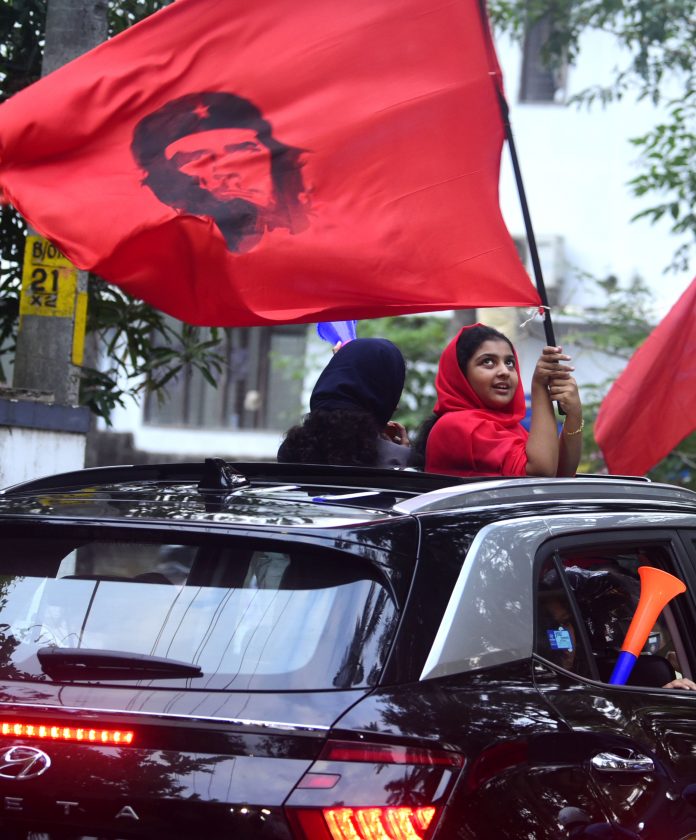 The ruling Left Democratic Front (LDF) in Kerala emerged victorious in the local body polls, setting the stage for the assembly elections next year. The LDF won more than 500 of the 941 gram panchayats, five of the six city corporations and 11 of the 14 district panchayats. The Congress-led United Democratic Front (UDF) won 375 gram panchayats while the NDA could manage only 23.

Under the leadership of Chief Minister Pinarayi Vijayan, the LDF has every reason to believe it will do well in the next year’s Assembly elections. Firstly, the results have proved that CPI (M) still has mass support on the ground. Secondly, it doesn’t look like anti-incumbency is a factor in the state so far. Thirdly, Kerala has a consistent pattern of coalition winning the local body election repeating the success in the next Assembly election.

The CPI (M)-led LDF will create history if it retains power next year, because no coalition has, in the last 40 years, been able to get a second consecutive term in Kerala. The voters of Kerala religiously keep the practice of sending LDF and UDF to the ruling bench every alternate term. Is that going to change next year? A closer look at the voting pattern and the reasons into the victory of the Left in this local body election may throw some answers.

The drubbing defeat of the UDF needs to be examined first. This time, the LDF seized three district panchayats and two corporations from the UDF and captured a sizable number of block panchayats (108 out of 152) besides 55 per cent of the gram panchayats. The voting pattern also indicates that the BJP strengthened its position in places where UDF suffered huge losses. In such places, the LDF was either able to maintain its previous position or even make a gain.

The Thiruvananthapuram Municipal Corporation, the local body in which BJP claimed victory, is a telling example. Here, the UDF won 21 seats in 2015 while it was reduced to 10 seats this time. The LDF strengthened its position by winning 51 seats (+8 from 2015) whereas NDA maintained the same count (34 seats) despite losing some of its previous seats.

In Kodungalloor Municipality in Thrissur district, the UDF ended with one seat whereas BJP could manage a photo finish with the Left by winning 21 seats (Left retained power with a difference of just one seat). It is pertinent to see that the erosion of votes from the UDF visibly helped NDA across all local bodies. However, there are places where both LDF and UDF suffered vote loss which resulted in BJP’s gain. The Panthalam Municipality in Pathanamthitta District, captured by the BJP, is an example. Both LDF and UDF lost six seats here, which resulted in BJP gaining power.

The alliance with Kerala Congress Jose K Mani group proved to be a ground-breaking strategy for the Left in central Kerala that has a decisive number of Christian population. Jose K Mani, the son of late K M Mani (the leader of Kerala Congress who had been the pillar of strength for UDF in Kottayam district) went with the Left which was a culmination of the in-fights within his party. Kottayam turned red with the LDF winning district panchayat, a handful of grama panchayats and Pala Municipality — all traditional strongholds of the UDF. The list also includes Puthuppally Panchayat, the native place of Congress leader and former Chief Minister Oommen Chandy.

It was also observed that the minority votes that were polled massively in favour of the UDF in the Lok Sabha elections in 2019, floated back to LDF. The victory for LDF in the northern districts is part of the same trend. The LDF captured Kozhikode Corporation with 49 seats out of 77.

“It is very unusual for a ruling coalition to record such a massive victory. The people of Kerala know what the Government has been doing for them. They rejected the misinformation campaign of the opposition and a section of the media,” said Chief Minister Pinarayi Vijayan.

The government managed to deal with crisis situations, which could have played a decisive role in strengthening people’s trust in Vijayan’s leadership. From Okhi to Covid, Nipah outbreak and floods in between, the LDF Government has never had a peaceful time since 2016. One of the first decisions taken by Vijayan soon after his swearing-in was to stop the weekly press briefing on Wednesdays. The decision invited media’s wrath then. The same Vijayan started every day press briefing in August 2018 when Kerala went traumatised in the face of deadly floods. Vijayan candidly declared details on loss of life, people rescued, waterlogged locations, relief camps, damage to property etc. “Rhetoric is not his style. There were only statistics and practical solutions which had a therapeutic impact upon the people who were shocked to see such a massive flood for the first time in life,” says Dr Premkumar, a political commentator. Eventually, the Chief Minister got over his resistance to face the media. Be it the repeat floods and Nipah virus outbreak of 2019 or the Covid pandemic of 2020, the Chief Minister won people’s confidence with the finesse of an astute politician. Even during lockdown, Vijayan continued his daily briefing with transparency, often providing a realistic picture which helped Kerala to survive tough times.

Political commentators say that people experienced the change at ground level, be it the renovation of schools and hospitals, housing projects for the poor and homeless as ‘LIFE Mission’, or various pension schemes as social security pension and welfare pension.

There are many who agree with Vijayan when he says that this was the victory of secularism over communalism. “We still remain a people who abhor communal hatreds and divisive rhetoric. The UDF could have made more gains if the Congress leaders knew the futility of playing soft Hindutva. Since the elections were to local bodies where candidates are personally known to most voters, it also means the average Malayali has no appetite for poisonous zealots in their midst,” says Shajahan Madampattu, an author and political commentator.