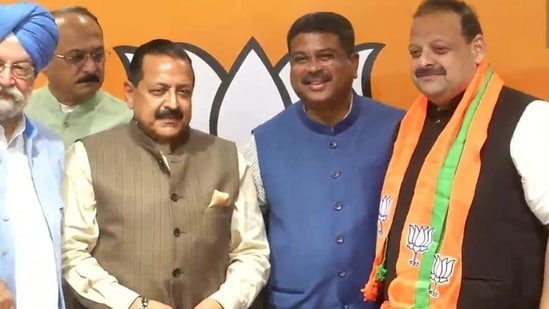 Before the Assembly elections, the BJP would also like to show that NC leaders were also leaving the party to join the BJP. Pic: Courtesy BJP

In what is seen as a blow to the Omar Abdullah-led National Conference (NC), the former Jammu president of the party, Devender Singh Rana, has switched camps to join the BJP on Monday (October 11).

Rana, who was regarded as the NC’s face in the Jammu region, had earlier served as political adviser to former chief minister Omar Abdullah from 2008-2014. Former NC MLA Surjit Singh Slathia too joined the BJP on the same day in the presence of Union ministers Dharmendra Pradhan, Jitendra Singh, and Hardeep Singh Puri, and BJP in-charge Tarun Chugh, said media reports.

Rana, who is also the younger brother of Union minister Jitendra Singh, is a three-term MLA. He had managed to unseat the BJP from the Nagrota constituency in 2008 and won the seat in the Hindu-majority dominated Jammu in the 2014 Assembly elections as well. Rana managed to project the secular credentials of the NC in the Jammu region.

According to Rana, he had joined the BJP because the party had reacted positively to his efforts to strongly push the “Jammu narrative”. The architect of the “Jammu Declaration”, Rana has been trying to bring Jammu region’s intellectuals, civil societies, leaders and members of trade and commerce together to further the interests of the region, said a Hindustan Times report.

The Jammu Declaration, proposed by Rana in January, called for all the political parties of the region to unite for more development in the region. It has been seen as a counter to the Gupkar Alliance, the Kashmir-based coalition that sought to restore the state’s special status which was revoked last year in August.

Rana wanted all the parties to be part of this Jammu Declaration for the inclusive development of Jammu & Kashmir. But according to Rana a “few parties” wanted to play politics and not strengthen the region. He had ostensibly spoken to all the political parties on the need for a political narrative emerging from Jammu and strengthening the ethos of Jammu and Kashmir and the country.

“Time has come to have a Jammu narrative, a political narrative, after all it was the Dogras, it was maharaja Gulab Singh, who carved out the state,” he said. The departure of Rana, who had been made the NC’s provincial president of the Jammu region, is likely to hurt the NC in Jammu, said The Print report.

Rana, a successful entrepreneur, is a Dogra, who enjoys the support of Jammu’s Gujjar Muslim communities. Meanwhile, a NC leader told the media that Rana fell out with the NC because he was pushing hard for the Jammu narrative.

According to NC sources, at a Gupkar Alliance meeting, he had asked Farooq Abdullah to not compromise national security and integrity by giving too much voice to the PDP (a Gupkar ally). But Abdullah pacified him stating that the Gupkar Alliance is not anti-national and they were working for the cause of Jammu & Kashmir, said ThePrint report.

Also read: J&K admin offers domicile to Kashmiri Pandits, but only a few turn up

The BJP is jubilant as J&K BJP vice-president Pawan Khajuria commented that Rana’s induction into the party will help them. He has a good rapport with the Gujjar Muslim and Bakerwal communities, as his seat in Nagrota comprises Hindus and Gujjars in substantial number, Khajuria told the media.

With this defection, the BJP expects their footprint now to increase in three to four constituencies since Rana has a good network from Kathua to Kupwara region. This development is expected to dent the NC in Jammu and will send a message among the Gujjars as well. Before the Assembly elections, the BJP would also like to project that they are a force to reckon with as leaders from the NC were also leaving the party to join them.

Moreover, they also hoped to make an impact in the nine reserved seats that will emerge  for the ST community, out of which four will be in the Jammu region after the delimitation exercise. They felt that the NC hold on the Gujjar vote bank will weaken after Rana’s induction and they could make more progress with the community, which is influential in more than 15 seats in the Jammu & Kashmir region.

In the 2020 District Development Council polls, in fact, the NC had gained in the Muslim areas of Jammu, like in Ramban, Kishwar, and Rajouri, but the BJP held its fort in the Hindu-dominated ones, winning in Jammu, Kathua, Udhampur, Dona, Samba and Reasi. In Jammu, the BJP won 75 of 280 DDC seats, including three in Kashmir, while the Gupkar Alliance got 110.