Emission control strategies of greenhouse gases have emerged as the central plank of coping with climate change. In developed countries, these include compilation of detailed emission inventories, mandatory reporting norms for emissions by industries and other combustion sources, massive and rapid transition to clean energy sources like solar and wind power and biofuels, setting of rigorous auto emission standards, greenhouse gases taxation measures, emission trading systems similar to carbon trading, adoption of national and even city-wise emission mitigation action plans and, above all, enactment of stringent emission control acts to enforce all these.

Even while giving a fillip to carbon capture and sequestration, targets are set for emission limits in each sphere of the economy after assessing the emission abatement potential and are adjusted after regulatory impact analysis.

India, on the one hand, claims it is well on the way to achieve Paris climate targets much before the schedule. It also reports impressive strides in switchover to renewable energy. But India lags behind the developed countries by a decade or more in emission control initiatives.

Though Indian scientists played a pioneering role in coming up with the first IPCC report that awakened the global consciousness on climate change, we don’t have clearly defined emission-control targets for emissions of different kind. Though the country has adopted a Climate Change Action Plan, more as a device for bargaining for a greater share of global climate fund, a system of detailed plans for different types of emissions and for different sectors and for different geographical and administrative units is yet to take shape in a comprehensive manner.

On October 6, 2020, Greenpeace India along with the Centre for Research on Energy and Clean Air (CREA) released their study on sulphur dioxide (SO2) emissions in India and forwarded a copy of it to The Federal. Though SO2 doesn’t strictly fall in the category of greenhouse gases, we include it here as it is a major pollutant.

The study points out that though India has been witnessing a steady decline in SO2 emission for four successive years and recorded a significant decline of approximately six per cent in 2019 as compared to 2018, there is no room for complacency as the country continues to remain the top SO2 emitter in the world for the fifth successive year and the emission levels are quite high.

Related news: One for Mother Nature: Artistes around the globe and in India go green

Despite the decline, in 2019, India emitted 21 per cent of global anthropogenic (i.e., with human activity as the source) SO2 emissions, almost double of that of Russia that ranked second and more than double of China that ranked third in the world. 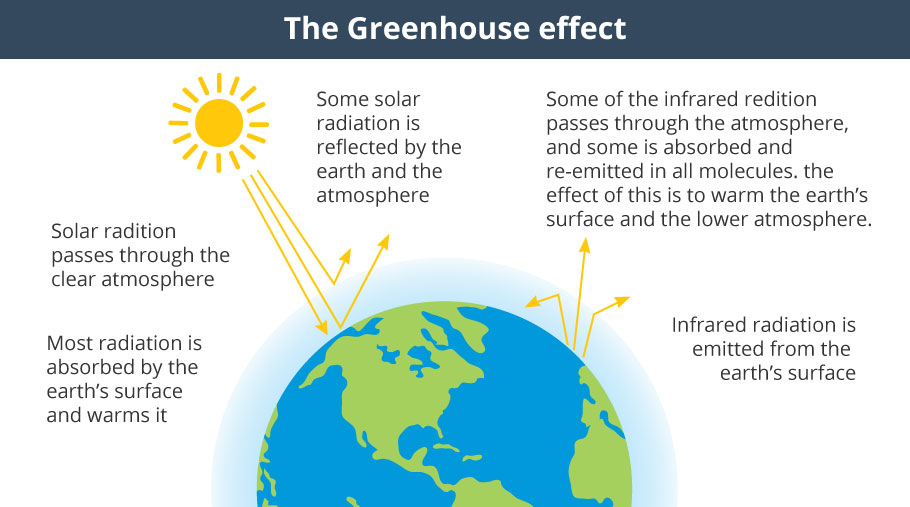 The SO2 emissions, by converting into particulate matter PM2.5, not only contribute to air pollution and global cooling (thus playing a role in earth’s energy budget), it is also a major public health headache as it increases the risk of stroke, heart diseases, lung cancer, and premature death, the study explains.

The report says the biggest SO2 emission hotspots in India are the thermal power stations (or clusters of power stations) at Singrauli, Neyveli, Sipat, Mundra, Korba, Bonda, Tamnar, Talcher, Jharsuguda, Kutch, Surat, Chennai, Ramagundam, Chandrapur, Visakhapatnam and Koradi. Most of the power plants in India lack flue-gas desulfurization (FGD) units, which are critical in the process of reducing emissions.

In 2015, the Ministry of Environment, Forest and Climate Change (MoEF&CC) introduced SO2 emission limits for coal power stations. But power plants missed the initial deadline of December 2017 for the installation of FGD units. The deadline was extended till 2022.

On October 8, 2020, the Japan Agency for Marine-Earth Science and Technology (JAMSTEC) released a study it had conducted along with 70 scientists from 44 research organisations on nitrous oxide, led by Prof. Hanqin Tian of Auburn University, US. Dr. Prabir Patra of the JAMSTEC forwarded a copy of the study to The Federal which was published in Nature magazine.

The article points out that global N2O emissions are on the rise over the past four decades. Over the years, N2O level has increased by over 20 per cent from 270 parts per billion (ppb) in 1750 to 331 ppb in 2018, the study says. The highest growth rates in N2O emissions come from the emerging economies, particularly Brazil, China, and India, as agricultural production contributed 82 per cent to the global anthropogenic N2O emission in the recent decade. The most worrisome outcome of this increase is that it could lead to rise in global mean temperatures well in excess of 3 degree Celsius.

The study which calls itself the global nitrous oxide budget is an inventory, analysis and synthesis of this particular greenhouse gas of N2O across all sectors and regions. It has been produced by a group of international scientists working under the umbrella of Global Carbon Project (GCP). Besides cropping systems, combustion in manufacturing and transport sectors is also a major source of N2O. Grasslands, riverine plains and wetlands are also major geogenic sources of N2O emissions. Dr. Patra succinctly summarised the characteristics of N2O pollution as follows:

“Nitrous oxide (N2O) is a long-lived greenhouse gas and an ozone-depleting substance, with an atmospheric lifetime of 116±9 years. It is the third most important man-made greenhouse gas leading human-driven climate change, after carbon dioxide and methane. N2O is accumulating in the atmosphere at an increasing rate, with global emissions of 17 Tg-N in 2016, 10 per cent greater than in the 1980s. The dominant cause of the atmospheric N2O increase is the use of nitrogenous fertilisers in agriculture, including organic fertilisers from manure produced by livestock. 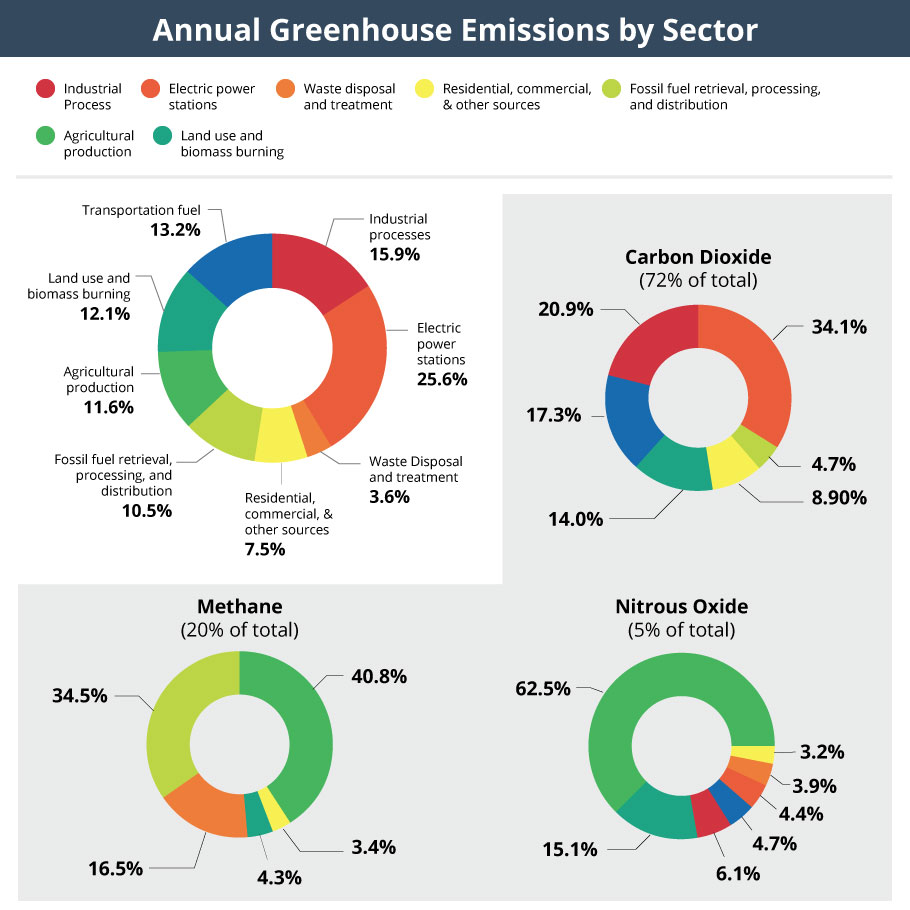 “N2O emissions are increasing faster than any emission scenario developed by the IPCC, consistent with GHG scenarios that lead to global mean temperature increases well above 3°C from the pre-industrial levels.”

“There is no simple alternative to the use of nitrogenous fertilisers without greenhouse gas emissions, unlike the case for fossil fuels, which can be replaced with renewables. Food production will always leak N2O, but we can reduce the amount that is leaked. Europe has shown that it is possible to bend the curve. Emissions from Europe have decreased over the past two decades through industrial and farming policies to limit the excess of fertiliser applications. Emissions from the US have remained largely unchanged despite a significant increase in agricultural production, suggesting more efficient use of nitrogenous fertilisers there,” Dr. Pep Canadell of CSIRO, Australia, who co-led the study, concludes on an optimistic note.

The NASA Earth Observatory reports — based on two new studies from the Global Carbon Project — that the amount of methane in earth’s atmosphere continues to rise.

Researchers, including Dr. Patra of JAMSTEC, found that the global emissions of the potent greenhouse gas totalled 576 million metric tons per year during 2008-2017 — a 9 per cent increase compared to the previous decade. Concentrations of methane now exceed 1,875 parts per billion, about 2.5 times as much as was in the atmosphere in the 1850s. Climate scientists estimate that the gas is responsible for about one quarter of the global warming that has happened since then. 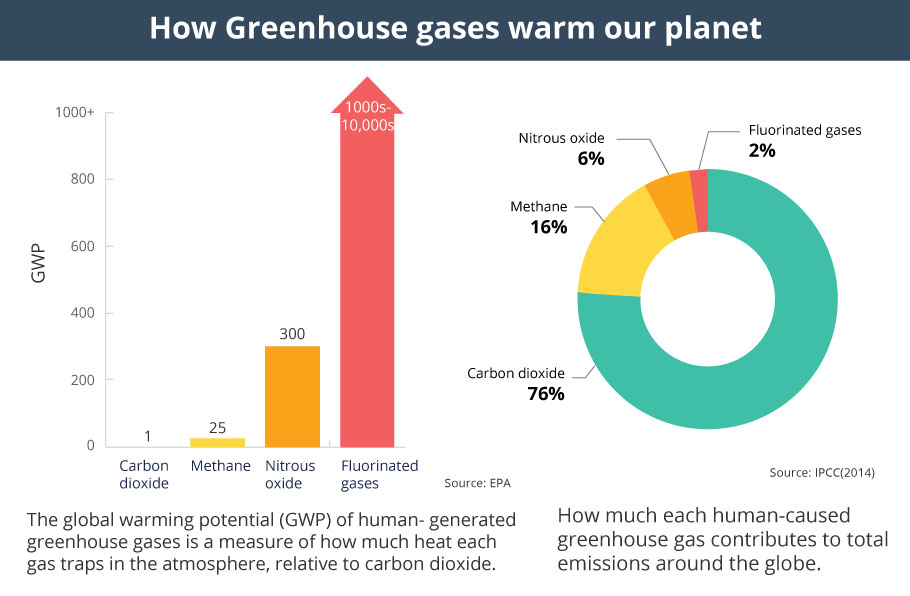 Methane is a much more powerful and damaging greenhouse gas than carbon dioxide although it stays in the atmosphere for less time. Methane is an absorbent of heat from the sun and hence warms the atmosphere. Livestock are responsible for 18 per cent of the greenhouse gases, mainly methane, that cause global warming, more than cars, planes and all other forms of transport put together.

While the share of methane and nitrous oxide in total greenhouse gases are 20 per cent and 14 per cent respectively, the contribution of carbon dioxide is 60 per cent. In 2018, India emitted 2,299 million tonnes of carbon dioxide, a 4.8 per cent rise from 2017, according to a report by the International Energy Agency (IEA).

India’s emissions growth in 2018 was higher than that of the US and China — the two biggest emitters in the world — and this was primarily due to a rise in coal consumption, a major source of CO2 emission. However, India’s increase in CO2 emissions slowed down to 2 per cent in 2019, the year of overall economic slowdown.

This again offers no grounds for complacency because India’s CO2 emissions have doubled since 2005, driven by a rapid expansion in coal use. The trend in India’s CO 2 emissions is of global importance. Since 2013, the country has accounted for more than half of the increase in global CO2 output. India has no effective CO2 emission control measure in place by controlling coal use.

On the whole, India’s emission control strategy leaves much to be desired and hopefully the new studies on the emission of greenhouse and other polluting gases can contribute to better emission mitigation measures.

Don’t burn dry leaves, use them to improve soil quality