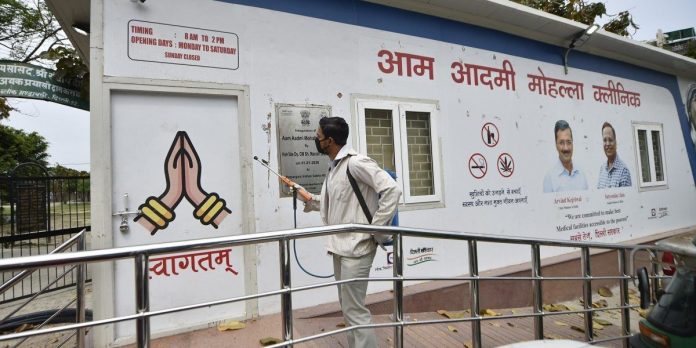 Delhi’s Mohalla Clinics, which the Aam Aadmi Party (AAP) flaunted as an innovation in primary healthcare, have failed the Covid-19 stress test, drawing dismay from the Delhi High Court. They have slipped as the first line of defence against the epidemic. Poorly located in congested neighbourhoods, staffed inadequately with just a doctor and an assistant and housed in small, often rented, premises, they have shown themselves to be little more than neighbourhood clinics.

Yet they impressed a correspondent of The Washington Post which carried a story in March 2016 with the headline, ‘What New Delhi’s free clinics can teach America about fixing its broken healthcare system.’ In December 2017, I also wrote an article about how the long wait time at the clinics was proof of their popularity.

At the West Delhi’s Todapur facility, R Pal said the “professional appeasement” he got as a community doctor evaded him during his pre-retirement stint as a medical practitioner in the New Delhi Municipal Corporation. His clinic was a large rented hall in an urban village with narrow lanes, where patients sat on benches. The atmosphere was open, informal and unintimidating. An automated vending machine dispensed medicines. Pal gave time to patients; he was not hurried. He did not like to see more than 80-90 patients a day in the four-hour window the clinic was open from 9 am to 1 pm (often extended by an hour or two). Sitting in an area of “sub-clinical infection,” he said he could see diseases as they incubated and developed.

The Ganesh Nagar facility in East Delhi was very small. The doctor’s room had spare space only for a patient, besides the attendant. Patients spilt beyond the ante-room on to the street. They had assembled well before the clinic had opened. At the Trilokpuri clinic, also in east Delhi, the doctor was attending to patients even at 3 pm – two hours past official closing time because of the throng of patients. There was similar pressure at nearby Mandawali.

The patients said the clinics gave them mental relief as private doctors would charge an arm and a leg. The quality of advice was good and the medicines were free. For many patients the alternative was to neglect an illness till it could not be ignored. By then the disease would have aggravated, swelling the cost of treatment.

The information which the doctors collected from patients was fed to a centralised repository through smart devices. This could be analysed for disease patterns which would alert the authorities to the emergence of epidemics like dengue. Preventive measures could be taken if the city’s multiple administrative authorities could coordinate among themselves.

Also read: Do we shut our eyes to people dying: Delhi HC to Centre on oxygen crisis

But the clinics were stripped-to-the-bone facilities. The doctors, paid Rs 30 per patient, did not have an incentive to spend time with them (with exceptions like Pal). But the hype was such that even the judges of the Delhi High Court asked about Mohalla Clinics: “What good is it if it can’t be used in this pandemic?” This, when they were hearing a batch of 17 writ petitions on May 4, seeking their directions to the Centre to augment supplies of medical oxygen. “If you have created this infrastructure, what is the real worth of it?” the judges asked.

Little did the judges know that there was little infrastructure worth the name.

To be effective in dealing with pandemic, the Mohalla Clinics should have been able to double up as ward-level ‘war rooms’ with dashboards that told the staff manning an array of telephone lines where hospital beds were available and which ones were equipped with facilities like ventilators and intensive care units so they could guide patients. They would have linkages with ambulance services which would be made available to those that needed them. This is the system that Mumbai’s municipal corporation has installed. Counter-intuitively, laboratories in Mumbai were instructed not to share Covid-19 test reports first with patients so they did not rush around looking for beds and spreading infection. The corporation decided whether they could recover by isolating themselves at home or needed hospitalisation. In-house patients were given advice on phone and could reach out for help. The system would have fallen short in practice. But it cannot be faulted on the design to deliver on the scale that an epidemic requires.

This is also how the public healthcare system in Tamil Nadu and Kerala have coped with the pandemic. Once a patient tests positive, they become the responsibility of the state, says T. Sunderaraman, who until 2014 was executive director of the National Health Systems Resource Centre, which provides technical advice to the National Rural Health Mission.

Delhi’s Mohalla Clinics are under-designed. Perhaps they could be modelled on the new dispensaries of the Central Government Health Service (CGHS), which are housed in spacious and well-appointed buildings. They have a set of doctors to provide advice. Medicines are dispensed on the premises. For specialised advice and diagnostic tests, patients are referred to pathology labs and hospitals.

There is no reason why comparable healthcare services cannot be provided to the rest of the population. The Delhi government has vastly improved the city’s schools. Public healthcare needs a similar upgrade with Mohalla Clinics morphing into primary healthcare centres integrated with the network of hospitals.