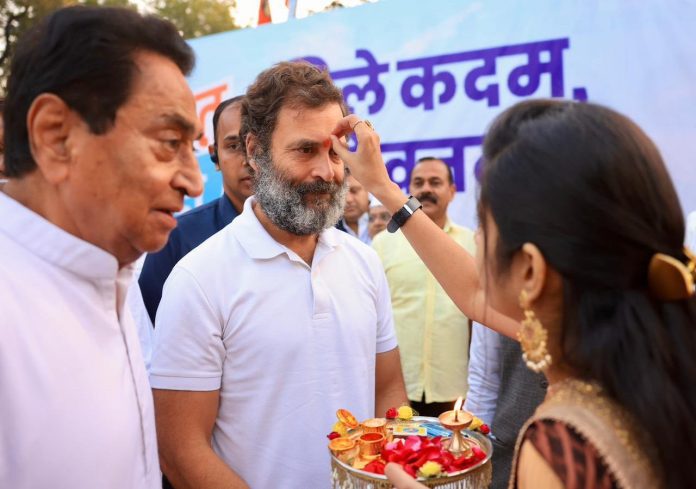 Confusion and chaos was writ large throughout the MP stretch of the foot march, said Bharat Yatris marching alongside Rahul. They conceded that the most poorly organised and mismanaged part of the yatra, so far, was in MP”

As the Bharat Jodo Yatra completed its Madhya Pradesh stretch to enter Rajasthan, the crowds that Congress MP Rahul Gandhi has been drawing to his 3,570 kilometre march kept growing. Yet, the 11-day dash across MP also showed why raising issues that strike a chord with the common public may not be enough to revive the Congress’s electoral fortunes until the Grand Old Party acknowledges and rectifies its organisational incoherence.

Madhya Pradesh was the first ‘Hindi belt’ state that the yatra crossed into after navigating through the southern states and Maharashtra. In the six states that the Bharat Jodo Yatra (BJY) covered before reaching Burhanpur, the Congress’s principal political rival, the BJP, remains a fringe electoral force in Tamil Nadu and Kerala, while in Andhra Pradesh and Telangana its aggressive bids for expansion have met with very limited success, so far.

The only states the yatra covered before entering MP where the BJP is a dominant political force were Karnataka and Maharashtra.

For Rahul and the Congress, the yatra’s foray north of the Satpura range into MP and the onward march to India’s Hindi Heartland is, in a sense, like the proverbial crossing of the Rubicon. The BJY is now in prime BJP territory – states where the Congress has neither been able to counter the saffron party’s political idiom of Hindutva nor navigate the labyrinth of caste politics that its arch rival has cracked through a Machiavellian fusion of social engineering, freebie politics and jingoistic nationalism.

The yatra’s coordinators and media managers from the Congress party have been busy patting themselves on the back for the impressive reception that Rahul and his fellow yatris got wherever they went in MP. Rahul too conceded during his interaction with the press in Sanwer, on November 28, that public participation in the foot-march had not just exceeded expectations but was even better than the prodigious turnout witnessed in the states the yatra had crossed before entering MP.

Also read: Bharat Jodo Yatra: The yatra, the yatris and all that makes it tick

Rahul’s euphoria over the success of his cross-country unity parade in MP isn’t without reason. In recent years, MP has witnessed a palpable rise in communal and social strife along with rising unemployment and farmer distress – issues the BJY has sought to highlight.

Through the yatra, Rahul’s interactions with representative of various Dalit and tribal organisations and leaders were well received. He made it a point to pay his respects on more than one occasion to Tantya Mama (also called Tantya Bhil; a revolutionary tribal leader who was hanged by the British in MP’s Jabalpur in 1889) while the yatra’s itinerary was also tweaked to ensure that Rahul and Congress president Mallikarjun Kharge were in Mhow, the birthplace of Dr BR Ambedkar, on November 26 to mark the Constitution Day.

Rahul’s strident Dalit and tribal outreach was understandable as over a third of MP’s 230 Assembly seats are reserved for Scheduled Tribes (47 seats) and Scheduled Castes (34 seats). Simultaneously, the former Congress chief also reached out to the agrarian community – another politically deft move as MP has had a history of farmer agitations and the killing of six farmers by the MP police in the state’s Mandsaur district in 2017, at a protest against the then BJP government’s failure to provide financial relief to debt-ridden peasants, is still fresh in public memory.

The outpouring of public support for the yatra in MP was also significant considering that the areas it covered – Burhanpur, Khandwa, Khargone, Mhow, Indore, Ujjain, Agar Malwa (primarily falling in the state’s Nimad and Malwa regions) – largely included long-held BJP bastions where the Rashtriya Swayamsevak Sangh (RSS) has, over the years, also invested heavily in mobilising support among the numerically strong Dalit and tribal communities for its electoral progeny.

Confusion and chaos during MP leg of Bharat Jodo Yatra

Yet, while images from the BJY’s journey through MP may suggest a growing support for Rahul, several party functionaries from the state and leaders directly involved with the yatra’s planning in MP that The Federal spoke to while following Rahul’s trail did not seem to share the same optimism over a revitalised Congress. The reason: squabbling, self-aggrandizing local leaders and deepening organisational incoherence.

Nearly a dozen Bharat Yatris (people who will be marching alongside Rahul for the full 3,570 km stretch of the BJY) that The Federal spoke to conceded that “the most poorly organised and mismanaged part of the yatra, so far, was in MP”. This despite the fact that MP is the home state of the yatra’s national coordinator, former chief minister Digvijaya Singh, while the party’s state unit is led by another Congress veteran, former CM Kamal Nath; a leader known for his formidable ability to marshal resources.

“Compared to Tamil Nadu, Kerala, Karnataka and Maharashtra, the yatra in MP was of a relatively shorter duration but it was the worst leg of the journey I have seen in every aspect; be it overall management of the yatra, organisational cohesion or commitment of the local leadership towards BJY… most local leaders were concerned either with getting access to Rahul or with showing down their intra-party rivals; very few made the effort to walk the full course of the yatra unlike in Maharashtra or the southern states where almost the entire first and second rung of the state leadership made an effort to walk the maximum possible distance,” one Bharat Yatri told The Federal, requesting anonymity.

A second Bharat Yatri said “confusion and chaos” was writ large throughout the MP stretch of the foot march. According to the Bharat Yatri, when they were still passing through Karnataka, they were told they will be in MP for 16 days but this was later cut down to 13 and then to 11.

“Even after we entered MP, the programme kept changing. The break day (days when the yatra camps at one place for a full day), venues where we were to make camp for the night and even the inter-city routes were changed at the last minute. I later found out that at least some of these changes were made to appease one senior leader or the other who was unhappy with the schedule or simply because of bad planning by the yatra’s coordinators in MP,” said the second Bharat Yatri.

To ensure success of BJY’s foray into Hindi heartland

Party sources said the Congress was eager to ensure that the MP leg of the yatra received greater response than any of the preceding phases of the foot march. To an extent, the plan also worked. Party general secretary Priyanka Gandhi Vadra, with husband Robert Vadra and son Raihan Vadra in tow, joined the march for four days soon after it entered Burhanpur.

The presence of both Gandhi siblings at the start of the BJY’s foray into the Hindi heartland ensured there was no let up in public curiosity that the yatra had aroused ever since it began from Kanyakumari on September 7. With both Rahul and Priyanka present in Burhanpur, nearly all senior party leaders from the state also made it a point to join the yatra’s welcome into MP.

A few days later, on November 26, when the yatra reached Mhow, Congress president Kharge too joined the yatris for an event to mark Constitution Day. A senior MP Congress functionary, however, told The Federal that the programme in Mhow was a fairly late addition to the itinerary because “the state coordinator did not know the significance of November 26” and was “likely prodded by Digvijaya Singh and Jairam Ramesh to make sure that an event at Dr Ambedkar’s birthplace, coinciding with the Constitution Day, was included in the itinerary”.

While the common public wouldn’t have noticed these behind-the-scenes machinations, sources said the bonhomie and solidarity that the Congress organisation had shown in the southern states to ensure a hassle-free yatra had begun to unravel by the time the BJY reached Indore, four days after entering MP.

NP Prajapati, a party veteran and former Speaker of the MP Assembly, reportedly complained to a senior Congress colleague about the confusion that frequent changes in the yatra itinerary was causing but to no avail.

A party leader from Delhi who had joined the yatra for the 11-day MP stretch told The Federal, “sthaaniya netaon ki ruchi sirf Rahul ke saath selfie khichwane mei thi (local leaders were only bothered about getting selfies clicked with Rahul)”. The yatra’s success in MP, the Congress leader from Delhi said, was “predominantly because of the common people and not the state Congress unit”.

He complained that “many local leaders, including several senior MLAs, either gave the yatra a complete miss or joined for a few hours and quietly disappeared the moment they had made their presence known to Rahul, Kamal Nath or Digvijaya Singh; for many of them participation in the yatra was like marking their attendance at the start of a class and then bunking school for the rest of the day. Even senior leaders like Bhuria, Ajay Singh and Arun Yadav did not bother to walk with Rahul for the yatra’s full duration in MP”.

A senior Congress MLA too aired similar views. “One can understand some old leaders with medical problems, like Kamal Nath and Suresh Pachouri not walking the full stretch of the yatra but this can’t have been the excuse for many of the others who came only to be photographed and then disappeared.”

Sources say even issuance of different categories of passes to party members to attend the yatra had become a cause of ego clashes and internal bickering. A leader privy to the yatra’s planning in MP alleged that a former Union minister who also served as state Congress chief had allegedly “hoarded all VVIP and VIP passes” and “these passes were distributed randomly to people close to him while even senior MLAs and functionaries got just one pass each and were forced to beg for more”.

Office bearers from the Congress’s frontal organisations such as the MP Youth Congress, the Mahila Congress and the MP-NSUI too shared similar complaints of being “completely ignored despite putting in every effort to ensure the yatra’s success”.

Several MP Youth Congress members The Federal spoke to complained that Vikrant Bhuria, MPYC president, “was only bothered about getting himself photographed with Rahul” and made sure that office bearers who did not enjoy his confidence “weren’t given passes for the yatra nor a chance to individually meet with other party leaders, including IYC national president BV Srinivas”.

Though said in jest, a MP Congress MLA known for his proximity to Rahul, was perhaps on point when he told The Federal, “the Bharat Jodo Yatra’s goal is to unite the country not the Congress in MP.” With Assembly polls for MP just a year away, the Congress may not find this funny.