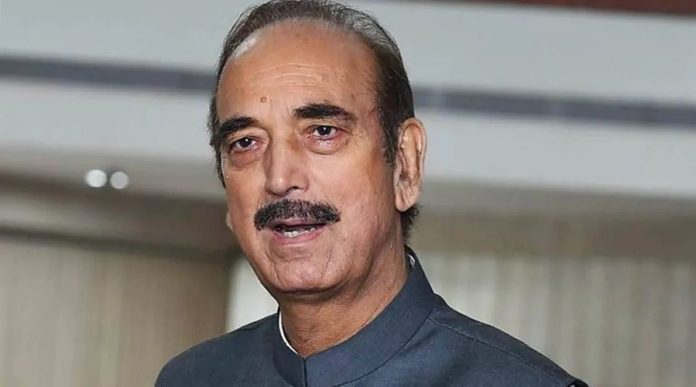 Ghulam Nabi Azad may launch his own outfit in J&K ahead of the Assembly polls that may be held for the reconstituted Union Territory early next year.

Finally, after two years of staccato outbursts followed by long spells of calculated silence, Ghulam Nabi Azad quit the Congress on Friday (August 26). A key pillar of the now dismantled G-23 – the group of 23 leaders who had, in August 2020, red-flagged the need for an effective leadership of, and reforms within, the Congress – Azad had been on the warpath against the party high command for the past two years.

The pushback from the Congress to Azad’s outburst has been prompt and scathing. “GNA’s DNA has been Modi-fied”, said Congress communication department chief Jairam Ramesh.

“It is most unfortunate, most regrettable that this (Azad’s resignation) has happened when Congress president Sonia Gandhi, Rahul Gandhi and the entire Congress party organisation across the country is engaged in confronting, combating, fighting the BJP on the issues of mehangai (price rise), berozgaari (unemployment) and on issues of polarisation,” Ramesh said. He added that the party is in the process of planning a massive rally against price rise that will be held at Delhi’s Ramlila Grounds on September 4, and the 3,570 km Kanyakumari to Kashmir Bharat Jodo Yatra that will commence on September 7.

Last week, Azad had resigned as the chairman of the party’s election campaign committee for Jammu & Kashmir hours after being given the post. Though he had refrained from speaking publicly about that decision, those close to him had maintained that he had made up his mind to sever ties with the Congress, of which he had been a leading member for five decades.

As such, Azad’s resignation from the party shouldn’t surprise anyone. What is curious though is why the party veteran sent his resignation to Sonia two days after she left the country for medical check-ups abroad. Incidentally, when the G-23 had sent its explosive August 2020 letter to her, Sonia was admitted at Delhi’s Sir Ganga Ram Hospital for treatment.

In all likelihood, Azad will launch his own outfit in J&K ahead of the Assembly polls that may be held for the reconstituted Union Territory early next year. There is also the possibility that several of Azad’s supporters in J&K who are still members of the Congress quit the party in the coming days and join him. Azad’s G-23 co-traveller Anand Sharma, another sulking leader who recently quit the responsibilities given to him within the party for the polls due in his home state of Himachal Pradesh, is also likely to resign from the Congress soon.

There is no denying that the exit of Azad is bad optics for the crisis-ridden and attrition-prone Congress. His move has predictably given the BJP and the media a field day to lash out at the Congress on various counts ranging from the familiar charge of the Grand Old Party being reduced to a Nehru-Gandhi sycophant club to criticism of Rahul Gandhi’s belittling of party seniors and the general state of drift that the country’s principal Opposition party has been in for over eight years now.

Also read: Cong might get a non-Gandhi head, but will it solve its problems? Unlikely

Azad’s parting shot, a five-page resignation letter, has given ample cannon fodder for such attacks. To be fair to Azad, there is undeniable merit in the criticism of the way interim Congress president Sonia and de facto party chief Rahul have been running the affairs of their organisation.

But then, if fairness is the yardstick with which Azad’s critique of the Congress is being measured, there’s much that the 73-year-old Jammu leader must also answer for.

Azad is, as is well known in political circles, was one among a litany of so-called Congress veterans who rose to prominence within the Grand Old Party – and by extension, also Indian politics – not because they had the stature of mass-base leaders coupled with brilliant administrative or organisational skills. On the contrary, many of these leaders rose through the ranks for the lack of such skills and almost entirely because they fulfilled the common need of different members of the Gandhi family – Indira Gandhi onwards – in different periods of Congress history to be flanked by sycophants and cheerleaders.

Anand Sharma, who is likely to follow Azad’s lead, belongs to the same clique of Congress veterans with no base and the same holds true for a number of leaders of the original G-23 constituents, most of them either rootless wonders or lateral entrants promoted through the ranks due to their proximity to the Gandhis at some point in time. The only major difference between Azad and Sharma’s credentials is that the former had at least won two direct elections to the Lok Sabha, albeit not from his home state but from the ‘safe seat’ of Washim in Maharashtra in 1980 and 1984, when the Congress swept the polls, while the latter has conscientiously stayed away from any electoral fight and has no constituency he can call his own even in his home state of Himachal Pradesh.

Yet, both Azad and Sharma remained prominent members of the Congress for decades, having held a number of key organisational posts, including a seat at the high table of the Congress Working Committee. Both also served in various ministries at the Centre under Congress-led governments and multiple terms in the Rajya Sabha, with Azad also serving as Leader of the Opposition in the Rajya Sabha for seven years before the Congress finally decided against giving him another term.

Even a cursory glance through Azad’s five-page resignation letter will make it evident that his exit from the Grand Old Party is motivated less by a concern for the Congress’s revival and revitalisation and more by the belated realisation of his growing political irrelevance. The first two pages of his resignation letter, in fact, are nothing but a listicle of all the posts he has held within the party since the time the late Sanjay Gandhi hand picked him as president of the J&K Youth Congress, in 1975-76.

By Azad’s own admission, between 1975 and the present, the Congress gave him multiple organisational responsibilities – presidentship of the Indian Youth Congress, general secretary of the AICC under every party president since mid-1980, CWC member continuously for four decades, in-charge of various states and union territories over a period of 35 years. He also lists how, between 1982 and 2014, he has served as a Union minister in every Congress-led government, before being appointed as Leader of Opposition in the Rajya Sabha.

The next three pages of his letter are essentially a rant against Rahul – a dossier of complaints, old and new, imagined and real – and the charge that Sonia is a “nominal figurehead” of the Congress while “important decisions are being taken by Rahul Gandhi, or rather worse, his security guards and PAs”. Azad rightly points out Rahul’s “immaturity” that was brought out in that infamous UPA-era episode when the latter tore up a controversial ordinance during a press conference days after it was passed by the Union Cabinet after consultations. Azad says Rahul’s “childish behaviour completely subverted the authority of the Prime Minister (Manmohan Singh) and the Government of India.”

The former party leader also scorches Rahul for stepping down as Congress president “in a huff” in 2019 after “insulting all the senior party functionaries”. He then goes on to call the process for electing the new Congress president – scheduled now for October instead of September – as a “farce and a sham” while accusing the leadership of propping up “proxies” to take the reins of the party. Azad prophesies that the “chosen one” to lead the Congress after the party’s presidential poll concludes will be “nothing more than a puppet on a string”.

A lot of what Azad says about Rahul’s leadership – as party president between 2017 and 2019 and as a back-seat driver ever since – is not entirely untrue. The problem, however, is that the veteran leader’s acerbic tirade is deliberately misleading on at least three counts.

First, Azad seeks to project that the Congress’s organisational drift began ever since Rahul was elevated by the party as its vice president in 2013 and that prior to this period, the Congress had none of its current problems. Second, he tries to give the impression that the organisational structure of the party and the process of appointments to it began breeding sycophants only after Rahul’s entry. Third, Azad offers no explanation of why he or his other co-travellers such as Sharma and Manish Tewari, who were ministers in the UPA government, chose silent acquiescence when Rahul was reportedly ‘subverting the authority of the Prime Minister and the Government of India’.

The Congress’s organisational drift, the process of abandoning internal elections and rewarding a coterie of sycophants with plum party positions and the shrinking of its electoral footprint began decades before Rahul’s plunge into active politics. Indeed, in the period of 14 years between Sonia’s first ascension as Congress president in 1998 and Rahul’s elevation as Congress vice president in 2013, Azad was among the most vocal votaries in the party of the process of filling key organisational posts through nominations instead of internal elections. When Rahul tore that ordinance, Azad struck no discordant notes.

In the period since the Congress’s exit from power following the 2014 rout, Azad was made in-charge of various states that went to polls and where the Congress eventually lost. As such, while his resignation letter today lists the number of elections that the party has lost since 2014, it offers no explanation of why he, now a proponent of collective leadership, never resigned a post on account of collective responsibility.

In truth, Azad was a key beneficiary of the culture of sycophancy that Indira established along with son, Sanjay, back in the 1970s, and which continued to grow under Rajiv Gandhi, PV Narsimha Rao, Sitaram Kesari and Sonia. The only difference was that this period saw Azad growing in strength and stature within the party as he successfully aligned himself with whichever member of the Gandhi was calling the shots at the time or even with Rao and Kesari for a time.

In his resignation letter, Azad says Rahul’s elevation as party president in 2013 and the years that followed saw the side-lining of all senior and experienced leaders. He then says a “new coterie of inexperienced sycophants started running the affairs of the party”. This can only be called a Freudian slip, for his grouse seems to be that the old coterie of experienced sycophants such as himself should have been suitably rehabilitated before the new coterie took over.

There is, in Azad’s exit, one lesson that the Congress may want to learn despite evidence from the party’s long history that it won’t – sycophants, old or new, don’t revive or strengthen a party and its leadership.