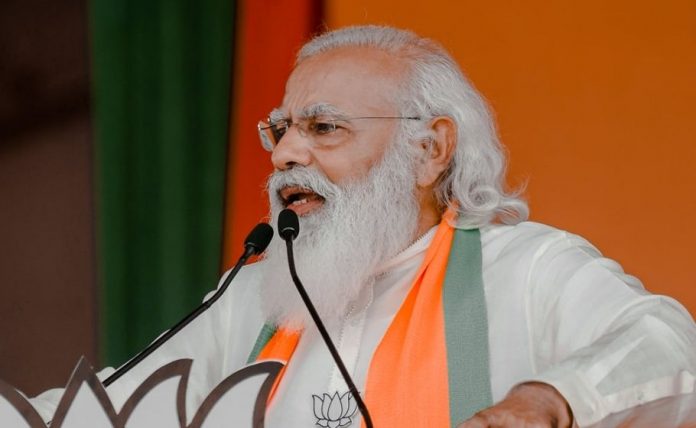 The BJP will bring ‘Ashol Poriborton’ (True Change) and transform the state into ‘Sonar Bangla’ (Prosperous Bengal) again once it comes to power, Prime Minister Narendra Modi told a massive crowd gathered at the iconic Brigade Parade Ground of Kolkata on Sunday (March 7).

The event, Modi’s first rally after the dates for the assembly elections were announced, is said to be attended by more than 7 lakh people with leaders like Kailash Vijayavargiya, the party’s Bengal in-charge, national vice-president Mukul Roy, general secretary Sanjay Singh, and Rajya Sabha member Swapan Dasgupta sharing the podium.

Promising people that a BJP government will bring more investments, protect Bengal’s culture and bring a real change, Modi said the development envisaged by his party in the next five years will lay the foundation for the development of the state for the next 25 years.

“I have come here to make you believe that we’ll work hard for farmers, businessmen and the development of sisters and daughters. We will live every moment to fulfil your dreams,” Modi said.

Lashing out at the Trinamool Congress-led Mamata Banerjee government over increasing crimes in the state, Modi said the current government has been unable to deliver on its promise of working for ‘Maa, Maati, Manush’ in the past 10 years.

“You are well aware of the condition of ‘Maa, Manush, Maati’. Mothers are being attacked on streets and in their houses. Recently, the cruelty unleashed on an 80-year-old mother has shown their cruel face to the entire country,” he said.

The prime minister’s speech was not without its usual dose of taunts for chief minister Banerjee –  from questioning her how she changed from ‘Didi of Bengal to the aunt of a nephew’ to taking a jibe at her recent attempt to ride a scooter in protest against fuel prices hike.

“Some days back, when you rode a scooty, everyone was praying that you are not hurt. It is good that you didn’t fall, otherwise, you would have made enemy the state where the scooty was manufactured,” he said.

He chose the same ‘scooty’ metaphor to take a dig at Mamata’s decision to fight the polls from Nandigram – where BJP is fielding former TMC minister Suvendu Adhikari – instead of contesting from her home constituency of Bhawanipore.

“Your scooty took a turn towards Nandigram instead of going to Bhawanipore. Didi, I wish everyone well and don’t want anyone hurt. But what can I do if the scooty is destined to fall in Nandigram?” Modi said.

A gigantic crowd had gathered at the Brigade Parade Ground when the prime minister landed in the city at around 2 pm. More than 1,500 CCTV cameras have been fixed across the city while drones have been deployed at the venue for security purposes.

The West Bengal BJP on Saturday had announced its first list of 57 candidates for the polls that will be held in eight phases between March 27 and April 29.