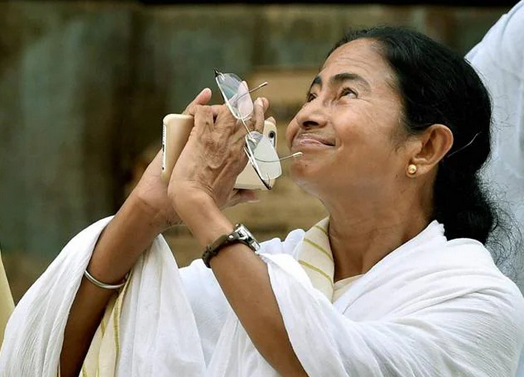 It was her battle for redemption.

Even before the poll bugle was sounded, many of her senior colleagues, including one-time protégé and number two in her government Suvendu Adhikari, deserted her.

They accused her of turning the Trinamool Congress (TMC), the party she founded in 1997 after severing ties with the Congress, into a family fiefdom.

“The TMC has now become a private limited company. The chairperson of the family-run enterprise is Mamata Banerjee and her ‘tolabaaj bhaipo’ (extortionist nephew) Abhishek Banerjee is its managing director,” alleged Adhikari.

For the first time, Mamata Banerjee’s personal integrity was under severe assault. For the leader who was voted by the largest anti-corruption coalition of India, India Against Corruption, as the most honest politician of India in May 2013, it was a big blow.

What must have been more ignominious was that the muck was thrown primarily by her former aides and colleagues.

Related news: COVID and the Neta: Modi, Kejriwal, Mamata and other capital crimes

Just a month before the eight-phase marathon elections got off, a team of the Central Bureau of Investigation (CBI) came knocking at the door of Abhishek’s Kolkata residence to question his wife Rujira Banerjee in connection with an alleged coal smuggling case, further deepening the crisis for Mamata.

Every salvo at Abhishek was actually directed at her. The underlying message was she was the one promoting and protecting corrupts.

The “cut money” charges against her party’s district, block and panchayat-level leaders made things worse.

The irony is, it was Mamata herself who coined the term two years ago. Addressing her party workers at Nadia district in June 2019 she warned them against taking “cut money” – euphemism for bribe — from beneficiaries of her government’s slew of populist schemes.

Little did she know then that her attempt at course correction, after her party’s not-so-well performance in the 2019 Lok Sabha elections, would become a poll plank of her opponents.

The misuse of Amphan relief funds last year added to her trouble and made the voice against her shriller.

Any other leader faced with a similar relentless volley of charges might have gone defensive. But not Mamata Banerjee.

She is known for standing up and making it count when the chips are down. In her own words, “an injured tigress is more dangerous”. No price for guessing whom she was referring to as tigress.

Launching an all-out counter attack, Mamata took the bull by the horns, deciding to contest from Nandigram, Adhikari’s home turf. It was a huge risk. But she knew it would galvanise her party workers not only in Nandigram, but the entire East Midnapore district and its adjoining areas. The party was in disarray in the district after Adhikari’s departure.

“In fact, the move was reassuring for the party workers across the state. She had upped the spirit by deciding to beard the lion in its den,” said Abed Khan, a leader of the TMC’s student wing.

“Her decision essentially conveyed our party’s poll theme — khela hobe (the game is on),” Khan added.

There was another implicit message in the decision — she could take on anyone, anywhere. What matters is only she.

The TMC’s impressive result in East Midnapore and other nearby districts only went on to prove how correct she was in her assessment.

She strutted from one constituency to another in a sultry summer on a wheel-chair, urging people to vote for her. “If you want to see me as a chief minister then remember to vote for my candidate, because only then I can form the government,” she would urge.

It was her very image, which the opposition tried to sully with allegations of corruptions and nepotism that she wagered to turn the dice.

After she suffered a leg injury while campaigning in Nandigram, she projected it as an attack on her to evoke public sympathy — yet another example of her ability to turn adversity into advantage.

BJP leader Kailash Vijayvargiya said the public sympathy for Mamata could be one of the reasons for his party’s defeat. He also credited her for the TMC’s victory.

Truly, it was her solo offensives that trounced the mighty BJP army led by Prime Minister Narendra Modi.

“The BJP government at the Centre is plundering crores of rupees and yet has the gall to accuse others of graft,” she told an election rally at West Midnapore, acknowledging that there were a few complaints of misuse of Amphan reliefs provided by her government.

“They speak of tolabaazi… syndicate. What syndicate? India knows only one syndicate, that is the Narendra Modi-Amit Shah syndicate,” she told another rally in Siliguri, returning the BJP fire with equal heat.

Mamata never even shied away from taking a jibe at Modi or turning the battle into a contest between her and the prime minister.

She turned on its head Modi’s claim that Bengal would see asol paribartan (real change) after elections. “Paribartan toh Delhi me hoga (the real change will come in Delhi),” she retorted.

“After selling off the Red Fort, Indian Railways, BSNL, Coal India, Air India, the only thing left to change is India’s name, after your name. You are the biggest tolabaaz. Poor people may get ₹5 or ₹100 if they engage in tolabaazi. What happens when you do it? SAIL was sold for how much? Rail, how much?” she was quoted as saying in another rally.

In yet another occasion, she claimed that the second COVID-19 surge in India was a “Modi-made disaster” and demanded the prime minister’s resignation.

The BJP was equally harsh in its criticism of her. Modi went to the extent of mocking Mamata in almost every rally addressing her as “Didi o Didi” in a typically taunting tone that many even found offensive. The BJP today must be ruing its strategy of directly confronting Mamata, giving her the very mileage that she was looking for.

At the end of the acrimonious battle, Mamata finally prevailed over the BJP, single-handedly demolishing its much-talked about well-oiled election machinery.

In the course of it, she also reinforced that in Bengal she is still the most effective one-person election machinery, a trait that made her a subject of study by the world’s leading universities such as Harvard and Cambridge.

Banerjee might have emerged unscathed from the battle. But she cannot allow herself any complacency given the fact that the BJP has managed to significantly increase its presence in the state from the mere three seats it got in 2016.

There is no denying it was her charisma that saved the day for the TMC despite a very average performance of its government, particularly on the economic front. Her government is yet to deliver on the grand vision with which it had stormed into the saddle of power a decade ago, dethroning the 34-year-old Left Front regime.

Once again, the electorate of Bengal settled for the very basic to keep the BJP’s perceived divisive agenda at bay and gave her the benefit of doubt, hoping she will live up to expectations this time.

People have given their mandate. It is now for Didi to do justice to the faith Bengal has reposed in her. That alone can ensure her true redemption.