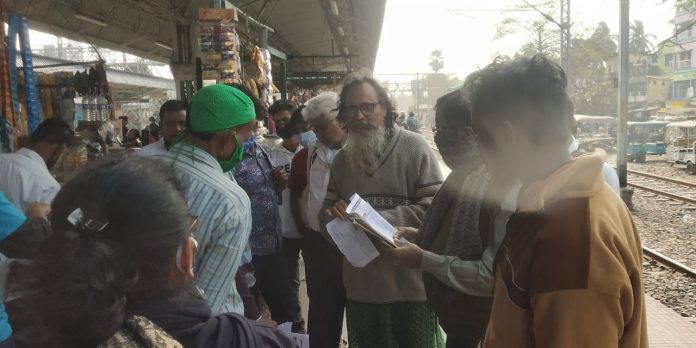 Unlike politicians he is not out there to seek votes.

A first-of-its-kind joint platform of representatives of aboriginal tribals, scheduled castes, including Matua refugees, and Muslims, the Damal Bangla is trying to build a mass movement in the state against the BJP. Within its fold there are 45 smaller organisations representing the aforementioned communities.

Floated sometime in mid-2020, the organisation made its formal public appearance with an anti NRC/CAA rally in Kolkata on December 9 last year.

Since then it has been holding door-to-door campaigns, street corner meetings and rallies arguing that not a “single” Hindu refugee could get citizenship under the “complicated” Citizenship (Amendment) Act, 2019.

“If you read the new citizenship law carefully, you will understand that this promise of giving citizenship to Bangladeshi migrants is totally misleading. Through the complicated process, ultimately only 33,313 people from Afghanistan, Bangladesh and Pakistan registered as refugees can get citizenship. No fresh applicant will get citizenship,” said Mondal.

To buttress its claim, the outfit has been distributing copies of the citizenship law and asking people to read it carefully to “discern reality from propaganda”.

Citing that in neighbouring Assam, the majority of those who did not find their name in the updated NRC are Hindu Bengalis, the Damal Bangla claims that over 6 crore people in West Bengal, mostly Matua refugees, other SC communities, Adivasis and Muslims would lose citizenship if the NRC is implemented in the state.

Though the Damal Bangla does not directly canvass for or against any political party, its anti NRC-CAA pitch is clearly directed against the BJP, which managed to get the support of Matua refugee community with the citizenship promise in the 2019 Lok Sabha elections.

With an estimated population of 30 lakh in the state, Matuas can influence results in at least 60 out of the state’s 294 assembly seats.

“Due to our effort at least 30 SC-ST dominated assembly segments that had voted for the BJP in Lok Sabha elections will this time vote differently,” claimed the Damal Bangla founder.

Whether the Damal Bangla actually succeeds in eroding the BJP’s support base among the SC communities, particularly Matuas, will be known only after the votes are counted on May 2.

But it has definitely unnerved the BJP, as has evident from the attacks on the Damal Bangla campaign team in various parts of the states allegedly by BJP supporters.

“So far we have been attacked in eight places, including Nandigram, by BJP goons. We have lodged several police complaints,” Mondal alleged.

The BJP denied the allegations.

Just as the Damal Bangla is spearheading a campaign against the BJP among the marginal groups, another clutch of organisations comprising civil rights activists, students, professors and retired professionals hit the streets with one clear appeal – No Vote to BJP.

The platform, formed in January this year, has so far organised over 100 street corner meetings in various districts. Besides distributing posters, banners, leaflets and booklets, it also released more than 20 video clips taking a dig at the BJP-led central government’s policies.

It is also running a parallel social-media campaign.

“Bikash atke gecche RSS jhandae; kalo taka phirlo na Modijir fundae (Development got stuck in the RSS flag; black money has not been recovered despite Modiji’s tall claims),” goes the lyrics of one of the music videos.

It then goes on to add, “Banglar manush dichhe dak, Banglae BJP nipaat jak; jonotar raye, BJP ke ar ektio vote noye (The people of Bengal will ensure the BJP’s doom; the public has given the verdict, not a single vote to the BJP).”

The platform cautions that if the BJP comes to power in the state then it would destroy the “cultural fabric” of Bengal.

“The BJP’s ideology is detrimental to the ethos of people in Bengal. The party’s presence in the state can only create conflict,” said Kushal Debnath, a leader of the platform.

Incidentally, Debnath, a former trade union activist, was put behind the bar under the Unlawful Activities (Prevention) Act by the state’s TMC government in 2017.

He said it’s not the time to remember those personal grudges as society confronts a bigger threat.

Amid this state-wide citizens’ movement, a group of leading Bengali actors also raised their voice against the BJP and its ideological fountainhead the RSS through a music video.

The video song titled Nijeder Mawte Nijder Gaan (Our Song Our Way) released under the banner of the ‘Citizens United’ appeals to people to vote judiciously.