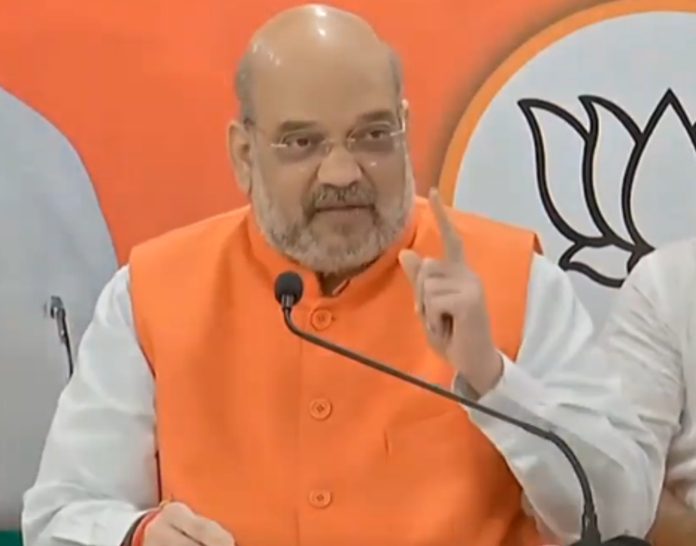 Home Minister Amit Shah counter-attacked the Chief Minister Mamata Banerjee on Sunday accusing her of instigating the violence in Cooch Behar, which had left four people dead at the Sitalkuchi constituency in West Bengal on April 10.

Home Minister Shah’s rebuttal came shortly after Banerjee had demanded his resignation for the “genocide” unleashed by the CISF forces when they had opened fire on villagers at Cooch Behar during polling in the ongoing West Bengal (WB) Assembly elections.

In this fiercely-fought ‘Khela Hobe’ war ahead of the WB state elections, Banerjee and the BJP have been at loggerheads with each other. Hence, Shah dismissed her allegations that he was responsible for the violence and instead accused her of provoking people with her advice to gherao the Central Industrial Security Force in Sitalkuchi.

““Even now, attempts are being made to politicise the killings,” Shah said during a rally in Santipur, NDTV reported.

As the fourth phase of voting wound up in the state, Shah went on to urge the people of Bengal to “celebrate the festival of democracy peacefully” in the rest of the phases. He also added that the BJP promised a new era of peaceful elections in Bengal after May 2 if they were voted to power.

The BJP leader was hitting back at Banerjee for wanting his resignation after the genocide at Cooch Behar, where according to the TMC chief the victims were “sprayed with bullets in the chest and neck”.

Speaking to the press in Siliguri in north Bengal, the CM said the fact that the CISF is not trained for mob control is being suppressed and for that reason no one was allowed to enter Cooch Behar for 72 hours. However, she did not hold CISF responsible for this incident because they followed the orders of the Home Minister.

Shah is completely responsible for today’s incident and he himself is the conspirator, she said, demanding his resignation.

On Saturday, around 10.30 am, the CISF on duty at booth number 126 at Jorpatki in the Sitalkuchi constituency had opened fire on villagers gathered there. However, a report submitted by Vivek Dube, the Special Police Observer appointed by the Election Commission said that the CISF had to fire in self-defence when villagers tried to snatch their weapons. According to Dube, the violence was an outcome of a “misunderstanding” between villages and the CISF.