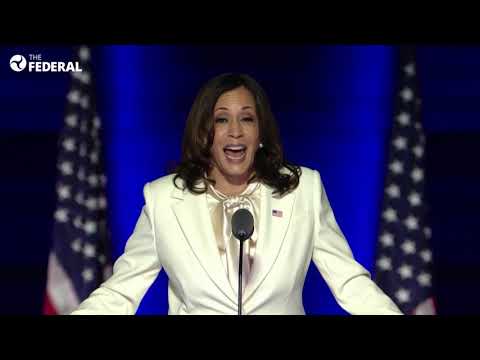 “While I may be the first woman in this office, I won’t be the last,” said US Vice President-elect Kamala Harris in her victory speech in Wilmington, Delaware on Saturday (November 7) night. Harris is not just the first woman to hold the White House office, she’s also the first African-American woman, the first Indian-American and the first Asian-American to be elected to the post.

“Every little girl watching tonight sees that this is a country of possibilities. And to the children of our country, regardless of your gender, our country has sent you a clear message: Dream with ambition, lead with conviction and see yourself in a way that others might not see you, simply because they’ve never seen it before, and we will applaud you every step of the way,” said the 56-year-old Indian origin Senator.

Related stories | Kamala Harris: The inspiring story of many firsts

Harris also remembered her mother Shyamala Gopalan, who she said prepared her for this day. “And to the woman most responsible for my presence here today — my mother, Shyamala Gopalan Harris, who is always in our hearts. When she came here from India at the age of 19, maybe she didn’t quite imagine this moment. But she believed so deeply in an America where a moment like this is possible,” she said.

In her speech, she thanked Asian, White, Latina and Native American women throughout America’s history who paved the way for this moment.