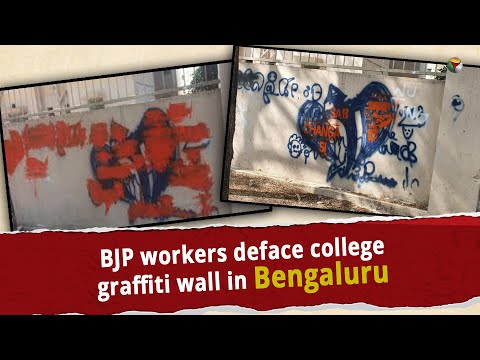 On January 14, irate BJP workers forced their way into the campus of Srishti Institute of Art and Design, Bengaluru and defaced wall graffiti critical of the government, with saffron paint. They also allegedly threatened students for drawing such graffiti, warning them of dire consequences if they didn’t end their protest against the Citizenship (Amendment) Act. A sudden atmosphere of panic that broke out on the campus, forced authorities to shut down the college for two days keeping in mind the safety of students.

The Federal spoke to a few students about the horrors of the day and lessons learnt from such attacks.

The students said the institute had kept away from politics and it was unclear as to why the miscreants targeted their graffiti.

This incident comes a week after saffron party workers heckled students of Jyoti Nivas College in the city.

Students said BJP workers, led by local MLA SR Vishwanath (political secretary to Chief Minister BS Yediyurappa), warned the students against gathering in groups of more than six persons. He reportedly said  they would be monitored through security cameras on the street.