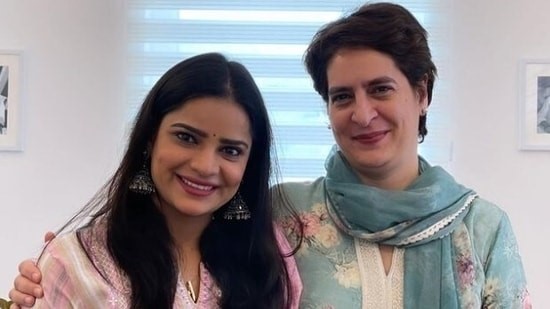 Archana Gautam, the Congress candidate for Hastinapur in the upcoming Uttar Pradesh elections, who had represented India in the Miss Bikini competition in 2018, came under attack from right-wing groups and the BJP, as her bikini pictures went viral on social media as soon as her candidature was announced.

The right-wingers are angry and “hurt” that the Bollywood actress, who was seen in a B-grade adult comedy, Great Grand Masti, has been named as the candidate from an “ancient, holy city” like Hastinapur in the upcoming UP elections. Hastinapur, which is a small town and assembly constituency in Meerut district on the banks of the river Ganga, can be traced back to the ‘Maharabharata-era’ and is a pilgrimage centre for Jains and is considered holy by different faiths, including the Hindus, according to right-wingers.

After the Congress released the first list of 125 candidates for the UP assembly elections on Thursday (January 13), as part of its ‘Ladki Hoon, Lad Sakti Hun’ (I am a girl, I can fight) campaign, the bikini pictures of Gautam went viral on social media, which quickly got the goat of the right-wing groups.

The sentiments of Hindus and Jains have been hurt by this Congress move to field Gautam as the candidate for the “ancient, holy city” of Hastinapur, said Ashok Sharma, national vice president of Hindu Mahasabha to the media. Akhil Bharat Hindu Mahasabha and Sant Mahasabha chief Swami Chakrapani also attacked the Congress saying that “nothing can be expected from a party which has gone mentally bankrupt”.

The BJP accused the grand old party of indulging in “cheap publicity” and not showing any seriousness by fielding an “apolitical” candidate. According to the ruling party, the Congress lacks candidates and is ready to field any candidate to garner cheap publicity and headlines.

Meanwhile, Gautam dismissed the opposition against her candidature as mere trolling. Defending her candidature, she said that she was born in Hastinapur and this is her birthplace. Priyanka Gandhi didi had found her suitable since she knew the region extremely well, she argued.

And, Gautam said that she is proud of what she does. “Those who are circulating my bikini-clad pictures have exposed their own mindset,” she said undeterred by the ruckus she has caused.

She also admitted to the media that she had represented India in Miss Bikini 2018, and was Miss Uttar Pradesh 2014 and Miss Cosmo World 2018. However, she urged people not to mix up her acting profession with her political career. Gautam had made her Bollywood debut in 2015 with the movie Great Grand Masti, and was seen in Haseena Parker and Baaraat Company.

Gautam also said that if she gets elected to the Assembly she would promote Hastinapur steeped in history as a tourist destination. She said that Hastinapur had lots of ancient temples and is a tourist place. But people are unable to access it easily because of lack of connectivity. And promised that the first thing she would do as an MLA would be to build a bus stand and railway station.

It is only then tourism will increase here and people will get employment, she pointed out.

Meanwhile, senior Congress leader Alka Lamba lashed out at Gautam’s detractors saying that the BJP leader Smriti Irani too had been a model before she acted in TV serials. “What kind of a mindset judges a woman by the role she portrays on screen or the profession they choose?” she asked, adding that they do not support those who share posters from her modelling days, said media reports.

Lamba assured Archana Gautam to “stay put and keep working hard”. And that her victory would be a victory for women and a victory over regressive ideas.