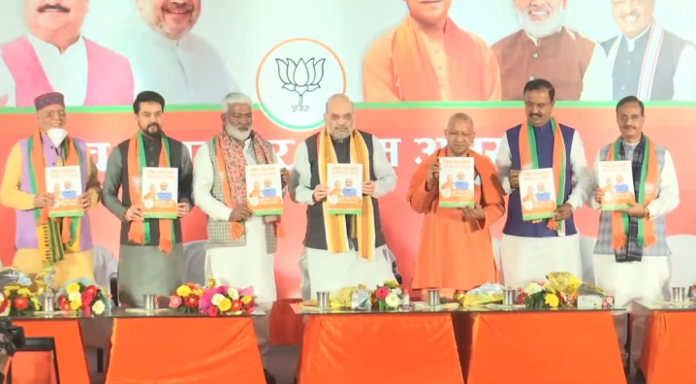 Free electricity to farmers for irrigation, free public transportation for women above 60 years and 10 years jail and ₹1 lakh fine on ‘love jihad’ offenders are among the promises made by the BJP in its election manifesto for the upcoming Uttar Pradesh polls.

“BJP UP team has given form to this ‘Sankalp Patra’. It is not just a ‘ghoshna patra’, it is UP government’s resolution… the 2017 ‘Sankalp Patra’ had 212 resolutions, of which 92 have been fulfilled. We do what we say,” Shah said.

The manifesto among a slew of freebies promises jobs to at least one member of each family, two free LPG cylinders during Holi and Diwali under the Ujjwala Yojana, free scooters for college-going girl students under the Rani Laxmi Bai Yojana and strengthening of the procurement of wheat and paddy at Minimum Support Price.

The manifesto also assures sugarcane farmers that interest will be imposed on sugar mills if they delay the payment of cane dues beyond 14 days.

While promising to increase the monthly pension for widows in the state to ₹1,500, the BJP also promised to double the state’s per capita income and attract investments up to ₹10 lakh crore.

During the release of the manifesto, chief minister Adityanath said that the party in its rule of five years has fulfilled all the promises it made before it was elected to power in 2017. Some of the changes that the UP has seen under his rule are improvement in law and order situation, a curb on riots and more security for women, he claimed.

The first phase of elections will be held in western UP from February 10. The counting of votes will take place on March 10.