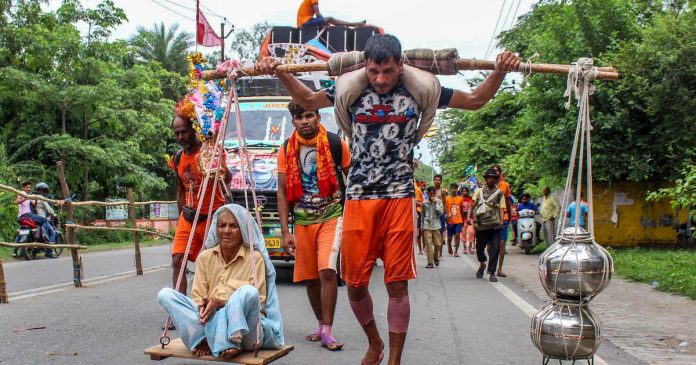 The Supreme Court on Friday asked Uttar Pradesh to reconsider its decision to allow Kanwar Yatra amid the pandemic, saying health of people and right to life is paramount.

The SC asked the Yogi Adityanath government for an appraisal on Monday, “or else we [the court] pass an order”.

Uttar Pradesh, where assembly elections will be held next year, is pressing ahead with the annual ritual, which sees heavy movement of pilgrims across states in North India.

The SC had on Wednesday taken suo motu cognisance of UP’s decision and issued a notice to the government. The court had sought the state’s response by July 16.

According to a Bar & Bench report, the state government has filed an affidavit saying that it only wants to hold a symbolic yatra.

Senior Advocate CS Vaidyanathan told the court that the State Disaster Management Authority had considered the issue and decided that if someone wants to undertake the yatra physically, they should seek permission, have a negative RT-PCR test, and be fully vaccinated.

The government has decided that a total ban will be inappropriate, he said.

Responding to this, Justice Rohinton Nariman said: “We can give you one more opportunity to consider holding the yatra physically at all. This or else we pass an order. We are all Indians and this suo motu has been taken up as Article 21 applies to all of us. Either you reconsider to have it at all or we deliver.”

The “state of Uttar Pradesh cannot go ahead with it. 100 per cent”, the court said.

Earlier during the hearing, the Centre told the court: “Given the situation, States must not permit movement of kanwariyas to bring gangajal from Haridwar to Shiv temples, but in view of age-old customs and religious sentiments, make it available through tankers at designated locations.”

UP decided to go ahead with the yatra even as Uttarakhand called it off.

“We discussed with higher officials and with officials from neighbouring states and decided that we will not hold Kanwar Yatra at this time. A variant has been found in Gadarpur, so we don’t want to make Haridwar the centre of COVID,” Uttarakhand CM Pushkar Singh Dhami said.

Samajwadi Party made Rampur hub of anarchy: U...