“MSP was there. MSP is there. MSP will remain in the future,” asserted Prime Minister Narendra Modi in a reply to the Motion of Thanks by President Ramnath Kovind in the Rajya Sabha on Monday (February 9). The prime minister, however, need not travel very far to see that the reality is further from his assertion. A mere visit to the Agricultural Produce Market Committees (APMC) in New Delhi, would reveal how farmers haven’t been able to avail the minimum support price (MSP) on their produce for the past five years.

Farmers in the national capital allege that they are not getting MSP for any of their crops from the past five years as the Food Corporation of India (FCI) is not procuring grains in any of three APMCs in Narela, Najafgarh and Mayapuri that are responsible for the procurement.

“FCI, which comes under the central government, procures grains on MSP in the entire country. The central government also fixes the price of grains. But in Delhi, the FCI is not procuring the grains. We have written letters to the prime minister and chief minister and held press conferences in the past, but nothing has happened,” Naresh Sharma, chairman of the Najafgarh APMC told The Federal.

However, in a written response to the farmers, FCI has said that the government after making all efforts for direct purchase of produce from farmers, stopped the procurement process in Delhi as farmers preferred selling their produce to private traders who offered prices lucrative than the MSP.

Farmers in turn termed the FCI’s version as untrue and said they are not getting good prices than MSP in the private market.

Deepak Yadav, a farmer from Najafgarh told The Federal that they get somewhere between ₹1500-₹1700 per quintal for wheat crop when they sell the produce to private traders while the MSP for wheat is ₹1,975. 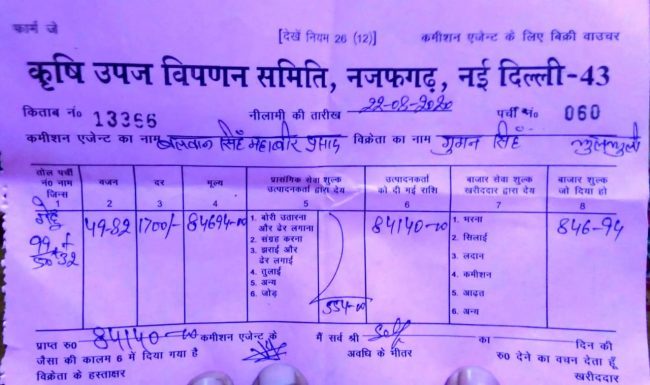 “No farmer in the area is getting MSP benefits and we have to incur huge loses every season,” he added.

In 2019, the Arvind Kejriwal-led Delhi government said that it will set the MSP at comprehensive cost (C2) plus 50 per cent, in line with the recommendations of the Swaminathan Commission. So the MSP for the crops in Delhi is high as compared to other states.

Deepak said a high MSP also means the loss will be greater when farmers are unable to sell their produce at the government-fixed price.

“If FCI doesn’t procure any crop, how will we get the higher MSP set by the Delhi government? It is like we have the best prices set for us in India on papers and we are not getting anything on the ground,” he added.

“The government is trying to leave the farmer in the open market while its own PSUs like BSNL or FCI can’t handle that competition and most are on the verge of closure. The way FCI is not buying food grains from Delhi and then lying today, it will stop buying grains from the farmers tomorrow. It will lead to the exploitation of the farmer in the private market. The government needs to make at least a provision of a guarantee of MSP to the farmer, which is equally applicable to all,” Deepak said.

Birendra Dagar, president, Bhartiya Kisan Union Delhi said the three farm laws have been introduced to implement the ‘Delhi model’ in India where the farmers will be left at the mercy of private buyers.

“FCI’s decision to not buy the grains in Delhi clearly shows what lies ahead for the farmers in India. After four-five years, as seen in Delhi, the APMC’s will be closed down in the entire country. Farmers won’t be able to blame anyone because they were dealing directly with private players and they will be left at the mercy of private buyers,” he added.