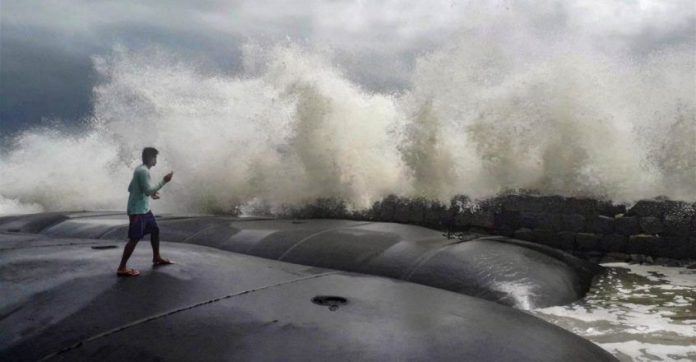 A huge wave crashes into the Kochi seawall amid warning that Cyclone Tauktae will intensify into a severe storm. PTI Photo

By Saturday evening, the cyclone was heading towards Gujarat and Daman with Mumbai likely to get showers in the way, the IMD said. The cyclone is expected be over Porbandar and Naliya around May 18.

Prime Minister Narendra Modi, on Saturday, reviewed the preparedness of various teams to deal with the cyclone and asked officials to ensure people are taken to safety.

Meanwhile, a red alert has been sounded in Kerala and in Lakshadweep. The Konkan area of Maharashtra as well as Goa are expected to receive heavy to very heavy rainfall on May 15 and 16.

The IMD has already warned fishermen to not enter the sea till May 17. About 100 teams with nearly 5,000 personnel of the National Disaster Response Force (NDRF) are ready to take up relief and rescue work in the wake of impending Cyclone Tauktae. NDRF Director General, S N Pradhan, tweeted to say the teams will be deployed in affected regions of Kerala, Karnataka, Tamil Nadu, Gujarat, Goa and Maharashtra.

The NDRF head said that NDRF members deployed for relief workers have already been vaccinated against COVID-19.

About 100 fishing boats have not come back to the shore in Palghar district of Maharashtra, which is a matter of worry for the local administration as cyclone Tauktae gains strength in the region.