Almost two decades after India became a hub for commercial surrogacy, the country could very well lose this famous tag, thanks to the Surrogacy (Regulation) Bill, which was recently referred to the Rajya Sabha Select Committee for review. The bill, which was passed in Lok Sabha in August this year, aims to end commercial surrogacy and calls for altruistic surrogacy or an arrangement, which doesn’t allow monetary compensation for the surrogate mother.

Commercial surrogacy is an arrangement where a ‘surrogate mother’ agrees to have an embryo generated from the sperm of a man who is not her husband, and the oocyte of another woman implanted in her to carry the pregnancy to full term and deliver the child to its biological parents.

The boom of surrogacy in India can be fathomed from the fact that over 2,000 foreign babies are born in the country through surrogacy every year. In Gujarat’s Anand district, Akanksha Hospital and Research Institute has seen 13,000 deliveries through surrogate mothers in almost two decades. A good part of it has also been fuelled by surrogacy tourism which has brought foreigners to India.

The Surrogacy Bill, among many things puts an end to foreigners flocking to India as it is also cheaper here. While a surrogate mother can be paid about ₹4 lakh or more, the whole procedure can cost ₹14 lakh or higher, which is far lesser than what it can cost in countries like the US and the UK.

Dr Priya Selvaraj, scientific and clinical director, GG Hospitals that pioneered surrogacy in the country since 1994, says that there are clauses in the bill that aim at regulating the process such as instituting a national and state level committee that would oversee the entire process of registration, screening and allocation of surrogates to clinics with maintenance of records.

However, she also says that altruistic surrogacy will fail as a model. “Altruistic surrogacy in a country like ours where only the low income group volunteer may not be a feasible model,” she says, suggesting that it can be offered alongside commercial surrogacy.

“What the government needs to do is to set regulations on financial transactions and limitations as to what should the payment be and how it should be done. In any case, lawyers and agents will be involved. Gone are those years where you can expect only altruistic surrogates,” Dr Priya notes.

The bigger problem in the bill is that it doesn’t specify who a close relative would be. V Vijaysai Reddy of the YSRCP, while supporting the bill, sought clarity on this aspect in the Rajya Sabha during the discussions last week.

Other specifications such as the surrogate mother should be aged between 25 and 35 years, married and with a child of her own, limits the choices available for a couple.

Dr Nayana Patel, medical director, Akanksha Hospital and Research Centre, says that surrogacy has offered hope for a lot of couples in the past. The present clauses have limited options for such couples. 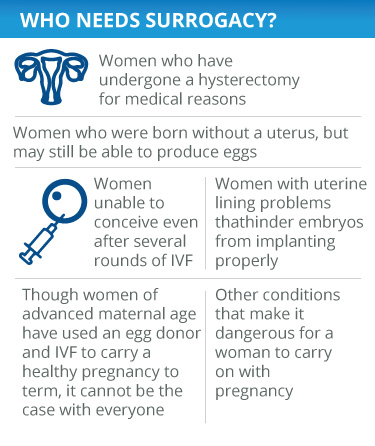 “I have had cases where the mother of a 20-year-old married woman has approached us for surrogacy treatment volunteering to be the surrogate mother. But she is 44 and doesn’t qualify to be a surrogate mother (as per the bill). Who will help people like her in an altruistic setup? Then there was a woman who had her ovaries removed after struggling with cancer, and now trying to find a surrogate in close family. What is the way out for such people?” she asks.

Dr Priya adds that it is essential to avoid exploitation, extortion and complications to the surrogate and intending parents.

“Surrogates get paid less than what the specialist or the mediators (brokers, NGOs) make in comparison. Whereas the specialists are experts performing complex procedures to enable a pregnancy, the mediators may exploit or extort amount from the surrogates and their family. So the bill is not unfair when it sets forth regulations and curtails commercial surrogacy to foreigners until it establishes a smooth and streamlined process,” she says.

Perhaps the government may reconsider opening the nation’s doors to couples that reside outside India to undertake a surrogacy programme in the future, Dr Priya hopes. The first step is to allow persons of Indian origin, overseas citizens of India and non-resident Indians or at least married to an Indian to benefit from this service.

Dr Nayana adds that she foresees divorces when surrogacy option is going to be closed because infertility in India is seen as a woman’s issue. “The problem with altruistic surrogacy is that it creates an atmosphere of pressure and tension because the mothers are from the same family.”

Instead of creating restrictions as per the proposed model, she feels the country can altogether ban surrogacy.

‘I did it only for the money’

Sushila* (40), a wage earner, does odd jobs like a substitute maid, road repair labourer, to make ends meet. Off late, she has been able to work only for a few hours every day.

The mother of four, three girls and a boy, who had been a surrogate mother when she was 23 in 2002, says she has been having pains for the last 17 years.

“My husband had accumulated a lot of debts from several people. He was unable to pay and those people would abuse and shout at us every other day. We had become a laughing stock in our locality. When I learnt about women who volunteered to be mothers for childless couples, I was surprised and I initially refused. Later, I went to the centre where the procedure was being done and I spoke to a few women who were desperate about having a child. I came back home and explained to my family and they reluctantly agreed.”

Sushila was kept away from her family for eight months till the child was born. “I stayed in a building, where there were other women like me. I never met the couple and the baby was handed over after a C-section at the end of eight months. I was paid ₹2 lakh and they bore the other expenses like food and doctor visits during the months,” she says.

Sushila is ready to be a surrogate again, but she knows she won’t qualify this time. “I tried talking to the people at the same centre; they said the surrogate mother should be below 35 years. Moreover, I have developed a lot of issues after the first time — pain in my back and abdomen,” she says.

Surrogacy in other countries

Sushila cannot articulate what changes have happened to her body. However, experts and activists seeking a ban on commercial surrogacy have been highlighting how the whole procedure is exploitative of poor women who do it for the money without any knowledge about the risks involved.  Studies like the one documented in 2015 in the Acta Obstetricia et Gynecologica Scandinavica, a peer reviewed medical journal of the Nordic Federation of Societies of Obstetrics and Gynaecology, pointed out that the women are often kept in dark about risks of having multiple embryos placed in their uterus, or having a foetal reduction (in the case of twins or triplets) or a Caesarean section.

A Narayanan, from Change India, who had written to the Centre seeking a complete ban on commercial surrogacy, says that the procedure is tailored to exploit poor women.

“There are multiple eggs being placed and the best egg is chosen as part of the procedure. While we can sympathise with couples who are desperate for a child, promoting a system that banks on unaware and vulnerable women is unacceptable. We have only a section of people who will be willing to go for it — those from a poor background. Will the same affluent family get their own (women) to undergo a similar procedure? I doubt,” he argues.

There is exploitation, but…

While the bill is significant and required for regulating a procedure that has been in practice for years now, the conditions impose a patriarchal system in the name of medical reasons, says Ajeetha BS, advocate, Madras High Court.

“Every woman has the right over the body — a fundamental right. The bill says that a woman of a particular age who is married and has a biological child, can be a surrogate once. They claim that the clause is backed by medical evidence, but it is satisfying religious beliefs at the cost of basic rights. Why can’t a single woman choose to be a surrogate? This causes a serious dent on the equality clause. Even a woman in a live-in relationship is disqualified under this, while legally long term live-in relationships are considered equal to marriages,” she says.

Ajeetha notes that the bill is problematic at various levels. For instance, it talks about certificate of essentiality and certificate of eligibility for the couple going for surrogacy.

“Who is going to be heading the boards certifying these? The bill doesn’t specify who the authority is and what are going to be the procedures adopted. I am afraid it is going to be ridden with bias and nepotism,” she says.

Another point raised in the debate in Rajya Sabha was about denying same sex couples the right to surrogacy.

Dr Priya reasons that single women or men wanting to become parents have every right to do so, but the option of surrogacy is more justified for men as women have their own wombs unless they suffer from severe health risks.

“Again, they must be the gamete donors in their individual situations if a surrogacy programme is to be undertaken. Gay couples have been left in the lurch as opposed to lesbian couples where any one of the women can carry the pregnancy that negates the use of a surrogate,” she explains.

“We are going to be creating a new set of defaulters. There is a demand for surrogate mothers and then there is a supply of it. This bill in no way protects the women and there are going to be other ways through which people are going to achieve the purpose. Its implementation is going to be a practical issue as well,” he says.

“There are agreements signed between both parties. To monitor it better, we can ensure legal counselling, try to see how far she is independent, at regular intervals through psychological counselling,” he adds.

Narayanan says the delay in implementation of the bill is unfortunate. “The surrogacy lobby is powerful in the country and a good number of them would be out of business if this bill is passed. It looks like the lobby is mounting pressure on Parliament to delay it further,” he said.

Assam floods: ‘The challenge is twice the size of Brahmaputra’