There are potent chemotherapy drugs today, but they kill normal cells while eliminating the cancer cells. The side effects are huge. Some years into the future, when the patient is on the treatment bed, the doctors will inject chemotherapy drugs to kill the cancer cells. But the drug is encapsulated inside nano-magnetic droplets. Using a magnetic wand, the oncologist will drag the magnetised droplets laced with the drugs to the cancer tissue through the bloodstream. Cancer cells are then targeted with no harm to the normal cells.

Does this all sound unimaginable? The ‘sci-fi’ treatment can one day become possible, thanks to a radical discovery — liquid magnets.

As the story goes, a simple magnet gifted by an uncle enthralled Einstein as a kid and turned him away from his earlier fascination from religion towards science. Indeed, as a child, we too were mystified by the power of magnets to reach out and grab pins and metal clips. A bar or horseshoe magnets, either salvaged from scrap or from the school physics laboratory, are familiar to us.

Those of us who had enthusiastic school teachers may have seen exotic magnets such as ring, cylindrical or even ball-shaped magnets.

Two things stand out. First, unlike an electromagnet, they stay permanently magnetised. Second, all of them are solid.

But have we ever seen a magnet that is in liquid or gaseous state?

With childlike curiosity, Xubo Liu from Beijing University of Chemical Technology and Thomas Russell of the University of Massachusetts Amherst and their colleagues wondered “what if the magnets were soft, flowable and reconfigurable like a liquid? Magnets that could conform to spatial constraints?”

After all, wonderment is the stepping stone for radical discovery. In what appears to be pure magic, they succeeded in creating for the first time a permanent magnet that is in a fluid state.

“We made a new material that is liquid and magnetic. Until now no one has ever observed this,” says a beaming Russell.

Asking you to recall science lessons learnt in school may perhaps sound torturous. Yet scratch your head and you will remember words like an electron, ferromagnetic material, magnetic poles, domains, alignment, and so on.

But, not every iron rod is a magnet and not every nickel or neodymium lump is magnetised. Now comes the second part.

Typically, in a lump of materials, 1,000 crore to 1 lakh crore atoms crowd together into a volume of 0.1 to 1 mm cube like a microcrystalline grains structure. Each of these atoms, even if they are magnetised often, are randomly oriented. That is, the north point of the tiny atomic magnet may be facing any direction. 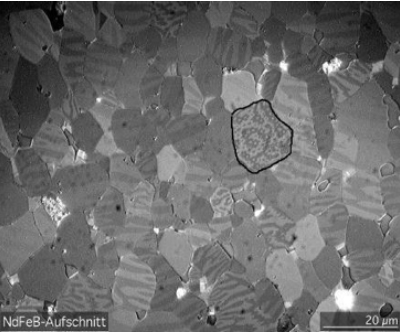 For each of the lilliputian magnetic atom facing a particular direction, there is often an atom facing the opposite side cancelling each other. Thus, while each atom in the domain is a ‘magnet’, as a whole, it does not exhibit any appreciable magnetic property.

A 1 cm cube of a lump of iron or nickel will have crores of domains. Even if there is any residual magnetism in each of them, the direction will be aligned randomly. Thus, one will cancel the other, and the net lump will exhibit hardly any magnetism.

How to make a magnet

Typically, we take an iron nail, wind coil many times, apply electric current from a battery, lo and behold, the nail magically turns magnet. What was until then just a rusted piece of nail, gains a fascinating property and attracts pins and paper clips. Our eyes pop out and the tongue comes out. A mischievous boy stealthily disconnects the battery, and the nail once again loses its enchantment.

How does this happen?

When you wind the coil and pass electricity, you are creating an external electrical field. Induced by the external electrical field, like boy and girl scouts who fall in line at the sound of a command, the domains suddenly align themselves. Remove the commander, and boys and girls become unruly again. The drill makes an obedient self-disciplined soldier.

In olden times, they used to hold an iron rod firmly exactly in the north-south direction and hammer it many number of times. In the shock of the vibrations, the tiny domains jump from their places a wee bit. As they fall, they mostly align in the same direction of the Earth’s magnetic field. This is how, in ancient times, they obtained a permanent magnet.

How to make a liquid magnet?

Suppose I take solid magnetic particles, say iron oxide, crush and grind them into nanoparticles and mix them in a non-magnetic liquid. Each of these magnetic iron oxide nanoparticles can act like a tiny domain, and we can have a liquid magnet if we can align them.

“In a ferrofluid, when dispersed magnetic nanoparticles in a carrier fluid are placed in a magnetic field, the particle aligned. Remove the field, the alignment goes away,” says Russell.

The spoiler here is the Brownian motion. Fluids are in a constant state of turmoil due to Brownian motion. If you drop a small amount of ink in still water in a glass, wisps of ink filaments can be seen swirling. Goaded by the magnetic field, magnetic nanoparticles fall in line, aligned in the same direction, forming into a liquid magnet. Remove the external field, the magnetic character of the liquid is lost.

Scientists have tried this feat much earlier. The next step they tried was to find if the magnetism of the liquid mixture could be retained permanently. “We wondered if a ferrofluid can become temporarily magnetic, what could we do to make it permanently magnetic, and behave like a solid magnet but still look and feel like a liquid?” Russell adds.

By constant stroking of solid ferromagnetic material in the same direction, a permanent magnet can be created. Else, by repeatedly hammering the iron rod, placed in the north-south direction, the microscopic domains in the lump could be vibrated to align in the same direction, resulting in a permanent magnet. However, when it came to the hurly-burly liquid, which was in a constant state of commotion, it became a great challenge.

Surfactants, used in detergents, foaming agents, are a long chain of molecules but are like a snake with two heads. While one end craves for the water molecule, the other is phobic to water. When you dissolve it in water and soak a soiled cloth, the dirt in the cloth attracts the water-hating tip of the surfactant while the other end is excited by the water molecules. As you agitate the soap water, thousands of surfactant molecules rush towards dirt specks and encapsulate it.

Now, the dirt is enveloped in a ball whose outer surface is water-craving while the inner surface is solidly attached to the dirt. When you rinse, the dirt encased by the surfactants are washed away, and the cloth becomes clean.

Russell and his team dropped millimeter-sized droplets of this solution into oil. The water-hating end of the polymers in the oil pulled nanoparticles from the droplet to its skin. The iron oxide particles crowded towards the surface of the droplet forming a shell at the interface between each of the tiny water droplets and the oil suspension. The tiny shell-like structures called microscopic nanoparticle surfactants (NPS) emerged. The microscopic NPS were like liquor-filled chocolates. The outer layer was a solid film while the inside was liquid.

“We placed these droplets in a magnetic field and imparted moment. When the field is removed, the moment remained as the NPS were encapsulated. That’s it. It’s very simple,” Russell says.

With NPS, researchers were able to create permanent magnetic droplets. Each droplet behaved like a solid magnet. They had all the characteristics of a solid magnet but unlike rigid solids, were ultra-soft with properties of a liquid.

Like many a discovery in science, this too was serendipitous. However, fortune favours the prepared. The researchers were experimenting with ferro-nanoparticle mixtures. They wanted to use the external magnetic field as a magic wand to control the moment of the droplets and move the fluid around.

After agitating the mixture, Xubo Liu pulled the stirrer out. He was stunned. “Xubo Liu noted that the droplet attached to the end of the stirrer was rotating. You can only have that if there is a magnetic moment in the droplet. You only get that with the jammed nanoparticles at the surface permanently aligned,” says an excited Russell.

“Surprisingly, the encapsulated magnetised particles in the droplet couple with those nanoparticles that were swimming inside the droplet and keep them in line contributing to the generation of a permanent field. However, we do not understand the coupling of the jammed nanoparticles and those diffusing around in the encased fluids. Only future research will unveil it,” Russell says.

In this experiment, the researchers created round and cylindrical droplets. Scientists point out that liquid magnets with more complex forms can be created with 3-D printing technology.

Conventional magnets, which are as hard and rigid as metals, have made great contributions to the development of the modern industry, according to Russell.

“The reconfigurable ferromagnetic liquid droplets that we have uncovered represent a milestone for further development of magnetic materials. We can control the liquid devices by an external magnetic field, which opens up promising research and application areas, such as all liquid actuators, liquid robotics and active matter delivery.”

Scientists are already talking of soft robots, targeted drug delivery and artificial cells as some of the potential applications of this magical discovery.