The Mer community of Gujarat has a proverb that says even if one is deprived of all things in the world, no one can take away their tattoos. And this, and not materialistic wealth, is what they take with them to the afterlife.

Traditional Mer tattoos are done using a single stick and pigment made from soot and tannin from the bark of trees. However, the designs, which normally cover the body of a Mer woman, are slowly vanishing as tribal culture integrated with urban lifestyles.

It is not just the body artwork of Mer and other ethnic groups across the country that is becoming ‘old fashioned’ as a new tattoo movement — one that is located in urban areas, in air-conditioned salons — rose to popularity. Fewer people get the green-ink, handpoked ‘pachai kuthu’ (Tamil Nadu) or ‘hacche’ (Karnataka) these days. The Mundas, Gonds, Santhals, Konyaks are just a few of the tribes whose tattoo work is disappearing.

But there are some within the woke and urban tattooing community who are reviving the handpoked or stick-and-poke tattoos.

If you visit Jacqueline Rose Kunnath’s Instagram page, ‘Tribeink‘, you’ll find beautiful, simple handpoked tattoo work she’s done, many inspired by tribal designs. She does ‘trajva’ (traditional patterns of the Rabari community) tattoos, where she brings together her contemporary sensibilities with the tribal designs to create something new yet old. She brings together traditional designs of different regions on one canvas, learning about the various cultures along the way.

Jacqueline started tattooing using a machine in 2012, at Skindeep Tattoo Studio in Bengaluru, but switched to the handpoke technique after an airline misplaced her bag with all her machines. “I still use a machine occasionally but I prefer making a tattoo unassisted by any electronic device. The feeling is quite raw. And the tradition of hand-poking is dying. So, I want to understand my craft from a different perspective,” she says.

A roving artist, Jacqueline travels as she tattoos, picking up new styles as she goes. “I like to explore different cultures. I feel like I’m stuck between modern and ancient India, which is why I want to witness and understand old and new traditions. I am lucky to connect with people who believe in the ancient wisdom on tattooing and understand the process of traditional tattooing. For this, I am always grateful,” she adds.

This revivalist movement brings with it some perks — traditionally, stick-and-poke is considered to be painful. In many cultures, getting tattoos is a sign of strength, courage and virility as people have to withstand the pain. Girls are tattooed at a young age to ensure they are toughened for motherhood. But contemporary artists who use the handpoke technique say it is significantly less painful than machine tattoos. “The technique of handpoking is quite gentle as it is made up of tiny pricks as opposed to the quick punctures of machine tattooing,” says Jacqueline.

Mohan, another tattoo artist, who has been trying his hand at the handpoke technique for the past eight months, agrees with Jacqueline. The artist at The Pumpkin Patch in Bengaluru, who goes by the Instagram handle ‘Monkieme’, says, “When I first started experimenting with handpoke, I tried it on myself. At first it felt like I was stabbing myself. After I was done with my first tattoo, I watched it for a month. I realised this technique hurts less and it heals quicker.”

The evolution of equipment may have something to do with this. Tattoo artists these days use the same metal needle that is used in a tattoo machine, whereas traditional tattoo work is done using different types of wood. Even if a needle is used, the lines aren’t as fine as contemporary handpoke tattoos because of the pigment or ink. “The major difference is the ink and needles being used — using a metal needle produces cleaner lines rather than using thorn (I have experimented using thorn too),” says Jacqueline. Now, she is in the process of creating her own ink.

Since there is better equipment, handpoked tattoos take less time to heal now. “Not only is it more gentle on the skin, but as there is no electrical interference during the time of making the tattoo, it heals faster,” explains Jacqueline.

Stick-and-poke artist Shreya Josh, who goes by the Instagram handle ‘Tender Pokes’, says that the tattoos she gives are like the contemporary version of tribal handpoked tattoos. “They still hold the same philosophy of ornamentation and identification in a (millennial) tribe. Similar to olden times, my studio environment is homey, low-key and intimate. I also emphasise on dot work and imperfect lines like the tribals did. The only difference is the advancement of materials — instead of bamboo sticks, I use sterile single-use steel needles and ink that is designed specially to be tattooed on skin instead of making my own from plants.”

Popularity on the rise

An increasing number of youngsters are getting interested in handpoked tattoos. It is easy to learn with practise and there are numerous online video tutorials so people are trying their hand at tattooing as well.

Li, who goes by the Insta-handle ‘Liactuallee’ and a gender-neutral pronoun, is an artist who is learning the handpoked technique now. The artist used to live in the US, where the stick-and-poke culture is big. After moving to Mumbai a few months ago, Li was surprised to find that not many people practise the technique in India. “I have a ritual of getting a tattoo for my birthday and I prefer handpoked ones. When I couldn’t find anyone in Mumbai who does it, I decided to try it myself,” says Li, who now takes clients.

“I like to sit with them, get to know them and then tattoo them. If I don’t get the right energy from them, I reserve the right to not work on them,” Li adds. The tattoo artist explains that the history of tattooing is so rich and beautiful that it involves some amount of energy transfer from the artist to the canvas. This is why the art of tattooing is more than just ‘inking yourself’.

Li recently put out an Instagram post asking if people want to get stick-and-poke tattoos and was surprised by the response. “The culture is slowly changing in urban areas. People are more open to the idea of getting a handpoked tattoo when they realise that it is hygienic. This is the new hipster, post-punk culture.”

The Pumpkin Patch has started doing more handpoked tattoos since Mohan took it up. Mohan, who primarily works on machine tattoos, says that he started handpoking as an experiment but got hooked to it. “I thought handpoke tattoos looked shabby and very DIY-ish. Thanks to Instagram I saw the amazing work people are doing with handpoke. Now, handpoking leaves me in a more peaceful mindspace personally than machine work.”

He tells his customers about the traditional technique now and more people opt for it. John, a tattoo artist at Skindeep Tattoo Studio, says though his studio doesn’t offer handpoked tattoos yet, it has been receiving a lot of enquiries for the technique of late.

In fact, people are so much interested in handpoked tattoos that Shreya managed to barter her way through Europe for two months — making tattoos in exchange for food, accommodation and such. “I love the idea of living life on a barter system. I haven’t perfected this method yet but I am constantly trying to push myself to sustain on it. This is why I planned a two-month Euro trip, without any hotel or travel bookings, where I tattooed people in return for stay at their houses. Sometimes I tattooed for cash to book transport to the next city. During this ‘vacation’, I lost my phone in Berlin, somehow made it to Hamburg without one, but once I reached Frankfurt, I hustled for a second-hand phone by trading a tattoo with this guy,” she says.

“Many times I tattooed for alcohol, which wasn’t the fairest trade because I definitely deserve more. But I had a fun night so it was a short-lived but satisfactory trade. This can be tricky because sometimes there is this tension of opposites, where I want to maintain my artistic integrity, but I am desperate to make some quick cash. So, I will tattoo some design I am not too fond of personally,” she adds.

Traditional handpoking had a lot of significance for tribal people — many of them did it for medical reasons or it was connected to spiritual transformation, explains Jacqueline. But does she ever feel like she is appropriating tribal culture?

“At our core, all humans are tribal,” she says. “Everyone has a different origin but everyone belongs to a tribe.” 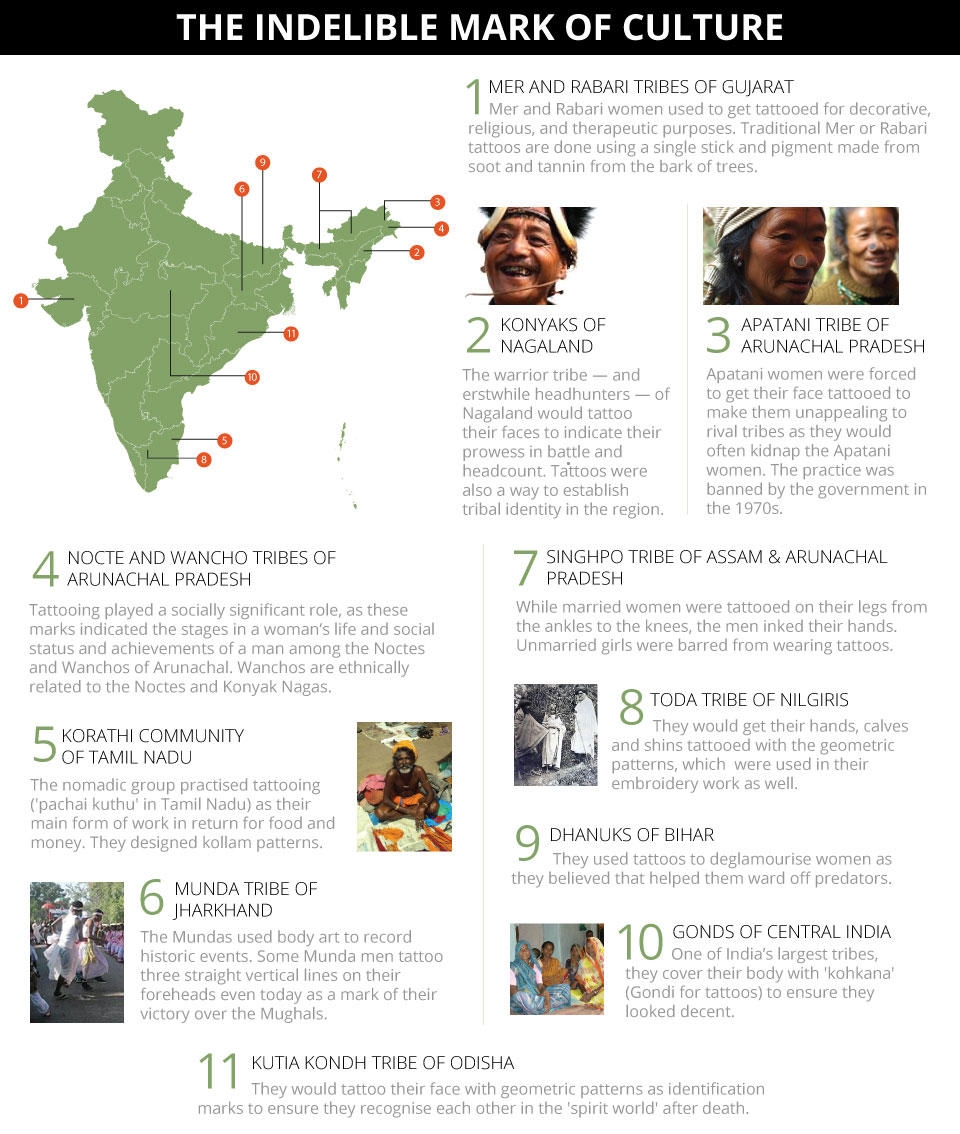 More than just music: A Margazhi in Madras