Sunil Kumar, a migrant worker from Uttar Pradesh’s Aligarh, works as a painter in New Delhi and earns around ₹400 a day. But that is only on days when he gets work.

About nine months ago, Kumar fell short of ₹2,000 required for his brother’s treatment. Banks wouldn’t lend to him since he didn’t have a regular job. So he took a loan from WifiCash, an app-based platform run by Delhi-based non-banking financial company (NBFC) Chadha Finance Ltd.

All he had to do was submit a photo ID, his Aadhaar number and take a selfie to authenticate it’s him who’s seeking the loan from his registered mobile ID. WifiCash gave him a loan within two hours of filling an application.

But then desperate times call for desperate measures. The quick disbursal of loan increased Kumar’s dependency on the platform. After nine months, Wificash increased his borrowing limit to ₹10,500. In February, Kumar took a loan of ₹10,500 for a month, an amount equal to his average monthly earnings. The company deducted the processing fee and interest in advance and disbursed ₹8,022 to his account.

With no source of income in the wake of the coronavirus pandemic and the ensuing lockdown, Kumar was unable to pay the amount. The lending company charged him 1% every day as penalty. His overdue charges during the lockdown period shot up to ₹9,792. This despite the government announcing a moratorium. Only after repeated complaints, the lending company waived the overdue charges.

But between March and May, Kumar alleges that Wificash accessed phone contacts (the permission to which he gave while downloading the app on his android phone), and even called up his immediate relatives.

“The recovery agent verbally abused and harassed me over the phone and posted fake FIR copies and legal notices on WhatsApp chat,” Kumar says.

Like Kumar, there are thousands of customers who’ve fallen prey to such lending platforms which are misusing data, overcharging customers and taking advantage of the digital illiteracy.

Daily wagers, students, small and micro business owners — borrowers mostly in the age group of 21-40 — told this reporter and sent proof of verbal abuses and high service charges and penalties levied on them. Several customers downloaded 4-5 such apps and borrowed loans from all at the same time.

Barring a few, most such lending companies charge a high interest and processing fee on short-term loans (seven days to one month).

For perspective, banks typically charge a processing fee of 1-3%. The interest rate on personal loans hovers between 12% and 20% while credit card debt costs around 30-36% annually. 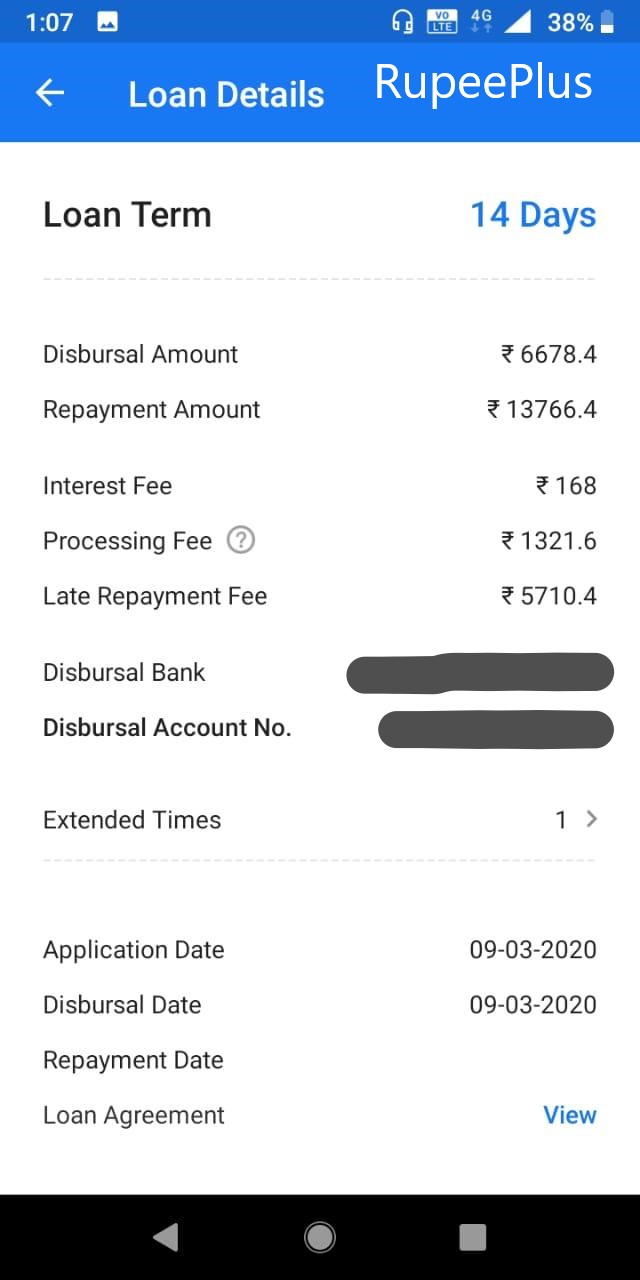 A document accessed by The Federal shows Robocash, a Philippines-based digital lending platform operated by JGR Fincorp Ltd, charged 1% interest on the loan amount every day as penalty for delay in repayment, including the moratorium period.

The Securities and Exchange Commission in the Philippines (SEC) last year barred Robocash from operating as they were doing so without a licence.

Das, who took a loan of ₹4,000 from Robocash on January 4, will now have to repay ₹9,050 after the moratorium period ends on July 2. Like Kumar, he too was subjected to harassment from the lending company’s recovery agents.

In response to The Federal’s queries, Robocash denied any wrongdoing. “We do not collect any personal information like customers’ personal contacts, SMS’s, etc. In fact, we have offered an amnesty scheme to our customers and are waiving the entire overdue interest,” it said.

Dragon in the backyard

The Federal has learnt that many of these companies are backed by Chinese investors who partner with India’s licensed NBFCs. On Google PlayStore, loans apps like CashBus, CashBean, InstaMoney, Moneed, Robocash, Cashmama, WifiCash, Moneed, Kissht, Loanflix among others are accessible at the click of a button.

Some of the customers have been granted loans not on the basis of the financial credit worthiness, but merely based on the PAN Card, Aadhaar card and how well they are connected on social platforms.

Some customers claim even CashBean, one of the largest players in the market, resorted to similar practices.

However, responding to The Federal’s questions, PC Financial, the entity through which CashBean offers loans, denied the charges of customer harassment and higher interests. 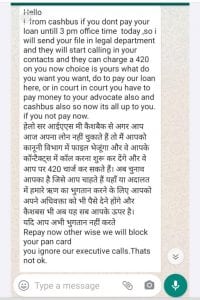 “The Company’s interest rate policy has been adopted by its board of directors, within the ambit of Indian laws and regulations, after taking into account all necessary considerations associated with the business of the company, including cost of funds, borrowing cost, risk associated, opex cost, etc,” it said in a statement.

“We only contact our customers on their personal number and in case the same is not reachable, on the emergency contact numbers provided by the customers as part of the loan application,” the company added.

Emails sent to other companies mentioned in this story did not elicit any repose.

Many of these platforms advertise on social media sites and apps like TikTok, SHAREit, DailyHunt, Facebook and Google where people from tier-2 cities and beyond spend more time consuming video content.

Their target audience remains Android phone users between 21 and 40 years of age. They tend to avoid iPhone customers because of the security aspects such as restrictions on accessing certain features on the phone.

Jack Zeng (English name), a senior executive at a Chinese lending Company in India, explains how some of these companies function.

While different companies use different risk management systems, most companies rely on credit scores from CIBIL, a credit information company. But since they restrict access to only licensed NBFC players, many of the Chinese companies he claims get data from players like Experian, CRIF High Mark and Equifax among others.

He also claims early entrants in the market build a database of their own over a period of time and sell that data to other companies. They prepare a list of high credit risk customers and the ones with good credit scores and share among fellow Chinese players in the market.

Zeng says many of these app-based platforms also access SMSes (not personal but commercial) of customers to assess if the person has taken any loan from other lenders.

“Some check how many lending apps one has downloaded and mark the borrower in the red category if he/she has more than nine lending apps,” he says.  Besides, he also says the number of contacts in the customer’s phone does matter to them as they assess the credit risk based on it.

In case of first-time customers, the lenders don’t mind taking risk because of the high interest that is involved, which he says works to their advantage. “If the risk taken pays off, the company gets a customer who it can build on for the future,” he adds.

Why India is a lucrative market

Data Analytics firm Tracxn in a report shared with The Federal noted that 434 app-based lending platforms came up since 2015.

However, there was not data available on the precise number of total borrowers who depended on such platforms.

The Federal trawled through the Registrar of Companies (RoC) database to check filings by 10 such lending companies and found that eight of them had Chinese connections.

In the recent past, there has been a rise in Chinese investment into India. With lack of strict regulatory controls, many entrepreneurs and investors have been eyeing India to make quick money.

Even though the Indian banking system is well-regulated, some tried to find loopholes in the system to exploit the market. A few of these firms entered Southeast Asian countries first before shifting their focus to India.They did so after Southeast Asian countries tightened the noose over the lending businesses. Malaysia, Singapore, Indonesia and the Philippines have all brought in regulations to govern digital lending.

In 2017, India received the largest share of Asia’s alternative lending deals at 41%. China was second at 32%, and Southeast Asia followed with 17% of total deals, according to a report by CBInsights, a data analytics firm that tracks startup investment across the globe.

Upon questioning as to how some of these Chinese companies gain access to verify based on Aadhaar and PAN cards, an industry source says, companies like Veri4digial and Digio do third-party verification by means of KYC for such platforms.

An industry insider who doesn’t want to be named says the RBI is taking note of all the alleged wrongdoing by such firms and will soon come out with a clear policy to regulate such firms.

“The regulators are taking note and they will soon tighten the noose. Post COVID-19, a few companies will die a natural death as they may struggle to survive with moratorium and capital risk with job losses all around,” he adds.

Meanwhile, the Digital Lenders’ Association of India (DLAI), an independent body with 81 lending companies as its members, has issued a fresh code of conduct for all its members with a need to propagate responsible lending practices.

Early entrants and the ambit of law

Vivek Veda, founder-director at KrazyBee, begs to differ with other players in the market. He claims not all players are bad and that some, including his firm, are functioning well within the ambit of the law and RBI regulations.

Krazybee has its own NBFC licence and it also partners with other firms for different services. They cater to students and working professionals in the age group of 21-40 mainly. 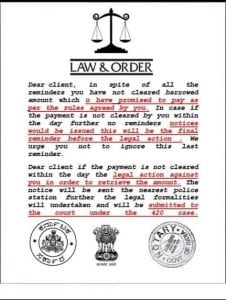 Veda says unlike other firms they do not depend on contact lists or phone features. He says they clearly go by the credit score and one’s repayment history in case of a repeat customer.

“For a company like us, with ICICI Bank as an equity investor, Xiaomi and Shunwei Capital as strategic investors, we cannot afford to do wrong.”

Veda claims his company sees default differently. “We educate customers rather than putting them at risk. We have, in fact, upgraded one million people’s credit worthiness who are now eligible for loans from mainstream banks.”

According to him, one cannot blame the players in the market alone as borrowers agree to the terms and conditions while taking loans. “They start complaining only when they are not able to repay or land in a debt circle.”

He, however, agrees that a few firms are exploiting the market to make quick money, which he believes will have a negative impact on the entire industry.

But for people like Das or Kumar, the lending companies’ terms and conditions in the app, most of which are in English, mean nothing. And not all apps are transparent in their interest and penalty charges.

“For us, it’s like giving permission to any other app. We barely spend time or understand the terms. Now, we realise the mistake and want the government to rescue us,” Das says.

“Credit demand has not been high even after rate cuts,” ...