Imagine that you are a kid sitting with your friends on the ground having a good time talking. Then everyone decides to go and play a game of hide-and-seek. You find yourself struggling to get up and your legs are not able to lift you. When you finally do slowly stand up, you find yourself struggling to keep up with the others and you are constantly out of breath. This is how it feels to have Duchenne muscular dystrophy (DMD).

DMD is a genetic disorder that occurs because of an issue in a protein called ‘dystrophin’. This protein plays a vital role in ensuring the structural integrity of your muscles. It is such an important protein that the gene coding for it is the largest in the human body. It stretches a record 79 exons (the units of DNA that come together to code for the protein) and has about 2.3 million base pairs.

Even the smallest mutation — a case of one deleted or duplicated exon — can cause DMD. It primarily affects boys but in rare cases, it affects girls too. This leads to progressive muscle failure and as the kid grows, the muscles fail to keep up. Soon, by the age of 10, he needs a wheelchair and by 18, he has trouble breathing. The boy’s most important muscles — the heart and lungs — soon get affected and DMD proves to be fatal by the mid 20s.

Why does the disease mostly affect boys? The gene is found only on the X chromosome and boys have only one copy, which, if affected, has no back-up option. Girls, on the other hand, have two X chromosomes, so even if one has an issue, the other will make up for it.

This dreadful disease affects 1 in 3,500 boys on an average. In India, there is no clear data but it is estimated to affect lakhs of boys. Each child has a unique genetic make-up so every problem is unique but, at the same time, they have the same disease. This dreadful disease spelt the death knell for families for many years and led to much turmoil. Families saw no hope or sign of relief.

That is, until now.

DMD is most often caused by one single mutation. What if we could rectify that mistake? What if there was a mechanism to correct the genetic code? What if you could customise a person’s medication? Can we change our own DNA? Wasn’t this in the realm of science fiction? Personalised genetic therapy is the answer to all these questions.

Every human has a unique combination of just four letters — A (Adenine), T (Thymine), G (Guanine) and C (Cytosine) — that make up the DNA. These four letters make up all organic matter on Earth. It is those slight differences in DNA that result in you being you, a mosquito being a mosquito and a platypus being that animal it is. Even identical twins have different DNA.

So, how do we treat a genetic disease? We custom make medicine for that person’s DNA. Unlike conventional, over-the-counter medicines, one cannot mass produce these, which is why it does not make financial sense for pharmaceutical companies to get in to this business. What is required is precision targeted medicine.

When the genetic sequence of a particular gene is known to cause a particular disease, it is possible to use certain technologies to act on the problematic gene and regulate the expression of the specific factor that causes the disease. A significant number of diseases are believed to be caused by mutations in single genes and these are known as monogenic disorders. Each condition may be relatively rare, but the many different types of monogenic diseases together affect a substantial portion of the population. The World Health Organization estimated the global prevalence of all single gene diseases to be approximately 10 in every 1,000 births, which may be ‘rare’ globally, but frighteningly common in India!

The two most promising technologies in personalised genetic therapy are Antisense Oligonucleotide therapy and CRISPR therapy.

Antisense oligonucleotides (AONs) are small pieces of DNA (or its single-strand cousin RNA) that can bind to the messenger RNA (mRNA). This blocks the ability of the RNA to make a protein by interfering with what is fondly known as the central dogma of life (DNA makes RNA and RNA makes protein). So all you need to do is identify the faulty exon that is causing the trouble, ensure that the exons on either side of it are compatible and then artificially remove that exon by making an AON designed for that job. This is a technology known as ‘Exon skipping’. Exon skipping using AONs is a technology by which we can get the gene to form a shorter but (more importantly) functional protein. It is currently one of the most attractive approaches for the treatment of DMD.

The other technology is CRISPR-Cas9 gene editing (which the author likes to refer to as ‘exon snipping’). Clustered regularly interspaced short palindromic repeats or CRISPR (pronounced ‘crisper’) is a bacterial defense system and it forms the basis for CRISPR-Cas9 genome editing technology.

Using CRISPR-Cas9, systems can be programmed to target specific stretches of genetic code and to edit DNA at precise locations. CRISPR sequences are transcribed into short RNA sequences that guide the system to match DNA sequences. Once the target sequence is locked, the enzyme Cas9 binds to the DNA and cuts it. This effectively turns the targeted gene off. By modifying the Cas9 enzyme it is also possible to do the reverse and activate gene expression instead of cutting the DNA.

So far, most research on CRISPR-Cas9 is done to create cell and animal models that can be used to accelerate the study of diseases. Scientists are still working to determine whether this approach is safe and effective for use in people. One of the main issues with this technology is the ethical concern when it comes to making alteration in human genomes.

As of now, genome editing is limited to somatic cells (cells other than egg and sperm cells), which means that the changes affect only certain tissues and are not passed from one generation to the next. However, changes made to genes in embryos or germline cells (egg or sperm cells) could be passed to future generations. This poses ethical challenges when taking into consideration that this technology could be misused to enhance normal human traits such as height, eye colour, hair colour, or even intelligence.

Due to these ethical concerns, genome editing in germline cell and embryo is currently illegal in many countries. In 2018, Chinese scientist He Jiankui edited a gene in an embryo and implanted it in a mother’s womb to make twin babies resistant to HIV infection. This caused much uproar in the scientific community and since then Jiankui has been fired by his university and China has started drafting regulations about human genome editing to ensure this does not happen again. Researchers have even suggested the possibility that the babies may have been mutated in a way that shortens their life expectancy.

Now, there are whispers that there may be a third CRISPR baby in China.

Antisense therapy and CRISPR-Cas9 gene editing are ways to set the controls to the heart of the DNA and offer exciting prospects to people suffering from disorders caused by mutations such as DMD, spinal muscular atrophy, cystic fibrosis, hemochromatosis, Tay-Sachs disease, and sickle cell anemia.

The stand-out feature of both these technologies is that they are custom designed for an individual. Medicine has always been thought of in terms of buying an over-the-counter drug which has been mass produced and can be purchased using a prescription. What if the medicine needed had to be tailored to a person’s genetic make-up, according to his or her unique DNA? That is customised genetic therapy. The strength of personalised medicine is precision. Many fields of medicine are moving towards customised treatment for patients based on their genetic signatures and clinical characteristics. This includes psychiatric and cancer patients as well.

Almost any biological sample, however small, containing a full copy of the DNA, can provide the genetic material necessary for full genome sequencing. Since the turn of the century whole genome sequencing has progressed to an extent that allows the identification of genes involved in a large number of diseases, and biomarkers that indicate disease severity or susceptibility to treatment.

Personalised medicine is becoming a stronger concept with the continuous identification of new genes and biomarkers specific to disease subtypes. This helps evaluate disease risk and response to therapy. With the constant inflow of new data, it is not speculation but prediction that we will soon have personalised medicine as one of the most sought after fields in the near future.

India has one-sixth of the world population, which includes several thousands of endogamous groups with strong potential for excess of recessive diseases. There are still many obstacles in these technologies such as ‘off-target editing’ for CRISPR and ‘multiple exon skipping’ for AONs. With an increase in awareness and, more importantly, funds and grants for research in these avenues, our quest to tackle the problems posed by our own DNA is one that is quickly turning from fiction to reality. The opportunity to bring relief to millions of people is now open and inviting. 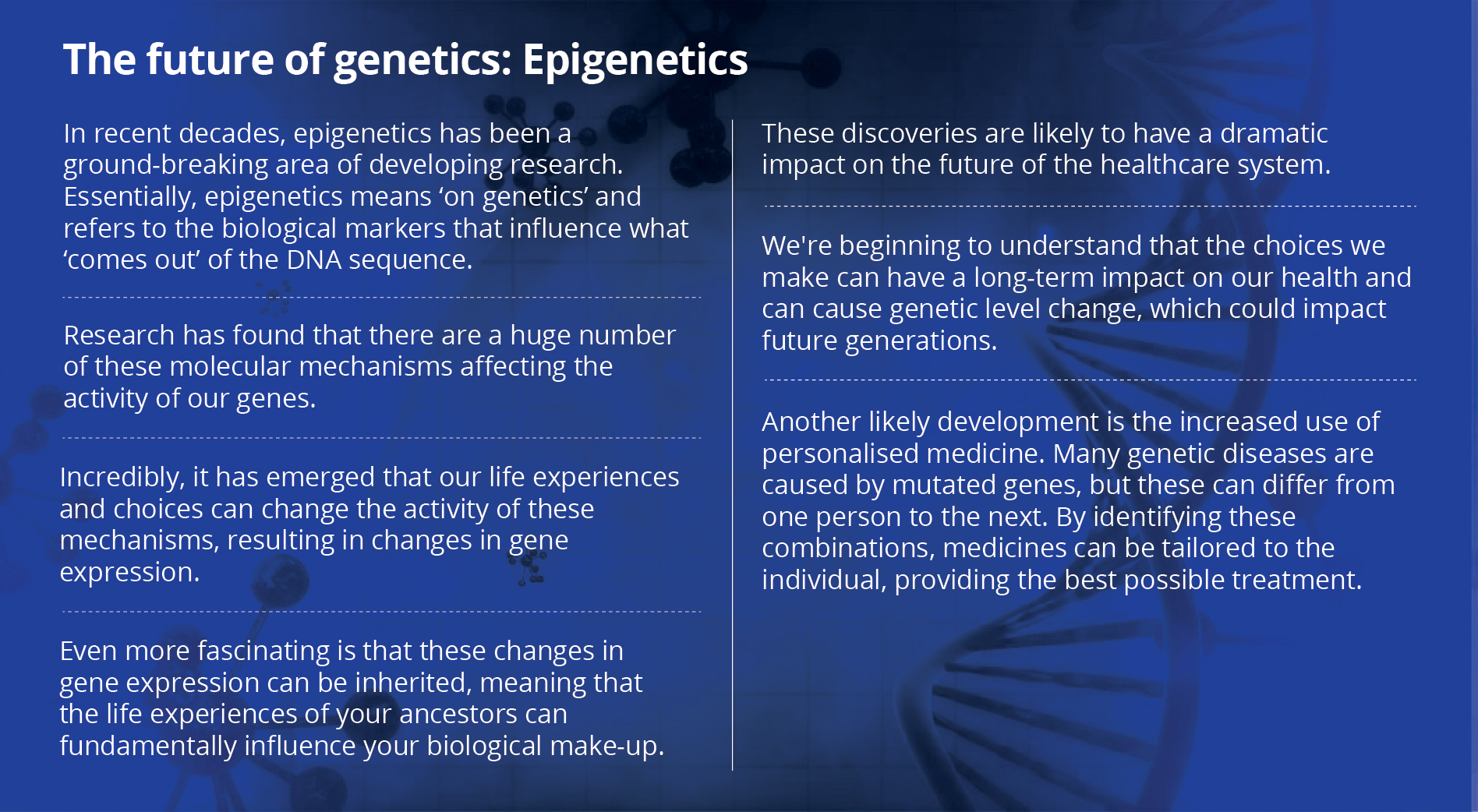 US university to collaborate with AIIMS, Kasturba Medical College on...