The first-ever cosmic rocket, a spacecraft escaping the earth’s gravity, the Soviet Union’s Luna-1 flew past the moon in just 34 hours. That was way back in 1959. This was soon followed by the first-ever moon impact probe, the Soviet’s Luna-2, that took only 36 hours.

The Apollo and Luna missions of America and the Soviet Union in the 1960s typically reached the moon in four to five days. Even though the Vikram lander failed in the last three minutes of its torturous descent, from the launch to attempt-landing on the moon, Chandrayaan-2 took 48 days.

While the Soviet and the US seemed to have travelled to the moon on a jet plane, we were doing so on a bullock cart. Why?

Hare and the tortoise

First things first. We are not the slowest to reach the moon. European Space Agency’s SMART-1 lunar probe, launched on September 27, 2003 took one year, one month and two weeks to reach the moon on November 11, 2004.

The craft was powered by a new-generation ion engine and used just 28 kg of xenon propellant for the entire mission. On the other hand, the New Horizon, a NASA mission to study the far reaches of the solar system, took just 8 hours and 35 minutes to fly by the moon, making it the fastest mission to the moon so far.

Going up the gravity well

A heavy object placed in the middle of a charpoy, the traditional woven bed, creates a basin-like dent on the flat surface. Likewise, in space sciences, a massive celestial body produces a bowl-shaped dip in the fabric of space-time.

Going to the moon involves not only moving up the gravity well but also overcoming the bothersome atmospheric friction. A trace of the earth’s atmosphere can be seen as high as up to a thousand kilometres. Nevertheless, 99% of the total mass of the atmosphere is confined within 32 km.

Usually, the first two stages of the rockets are expended for surmounting the atmospheric friction and gravity to reach a height of about 170 km, well above the thick blanket of the atmosphere. Out of the 640 tonnes, the total weight of the GSLV Mk3, the first two stages account for 597 tonnes. In the third stage, with just 33 tonnes, cryogenic engines take the Chandrayaan-2 spacecraft to a height of 180 km and leave it with a velocity of 37,080 kph (10.3 km/s).

For directly drawing water from a deep well, we need to pull the rope upwards against the gravity — something that needs a lot of physical strength and only a burly person can do it. However, even a skinny person can draw water from the well using a pulley. When the pulley is used, we pull the rope towards the ground, in the same direction of the gravity. In this process, we make gravity do part of the work.

At the dawn of the space age, both the Americans and the Soviets used a brute-force approach to reach the moon. Back then, spacecraft, whether with humans or a robotic mission perched atop gigantic powerful rockets, blasted off with very high velocity. The Luna and Apollo missions raced at lightning speed of 39,672 kph (11.2 km/s). The New Horizon was hurled into space at 58,536 kph (16.26 km/s). Akin to drawing water directly, the rockets with high velocity climbed out of the gravity well of the earth and were hurled towards the moon in a direct path.

As a speeding car has to apply the brakes to come to a halt at a speed breaker, the velocity of the spacecraft has to be slowed well enough so that the gravity of the moon can catch it. Once again, the powerful retro-rockets of the spacecraft were blasted in the direction of the motion in a bid to slow them down. All all this guzzles a lot of fuel.

In multi-storey residential apartments across cities, delivery boys throw newspapers to the balcony. If you are on the first floor, only a little impulse is needed. If on the second floor, it will need a little bit more impetus and the third floor a huge impulse. What if the delivery boy had to send the newspaper flying higher than even a third or fourth floor?

Well, there is an option — a  sling. By swirling the sling in an arc and releasing the tab at a precise moment, the projectile can be made to reach the target. The sling primarily works by extending the length of a human arm, thereby allowing the projectile to be hurled farther than it could be thrown by hand. By giving the right impulse, the object can be thrown to any desired height. Like delivery boys throw newspapers to the fourth floor, rockets can be made to hurl the spacecraft to the height of the moon.

The phasing loop approach is like a slingshot. When the spacecraft comes to the perigee, that is the closest point to give it a push. The push is given by activating on board rockets of the probe, called ‘burns’. With each thrust, the spacecraft will go higher and higher in its elliptical orbit.

Indeed, one can give all the push necessary at one go to meet the shortfall. For that, the rockets on board the spacecraft must be sturdy or the burning has to be for a longer duration. The LAM engine of ISRO is not fit for the same. More importantly, it is better to fire pulses for a short period.

In the case of Chandrayaan-2, five burns were made, and the orbit was raised to a height of 142,975, still falling short of the moon. The sixth and the last burn was performed and the spacecraft set sail towards the moon.

Fly me to the moon

The ISRO’s flight plan to the moon used both in Chandrayaan-1 and Chandrayaan-2 missions was thus frugal. Unlike the brute force direct path of the USSR and the US, ISRO, keeping its rocket capabilities in mind, devised an ingenious plan. Even with slender arms, ISRO heaved the spacecraft towards the moon. It used much less fuel, although the journey took many weeks.

An object that is thrown vertically upwards decelerates under the earth’s gravity. Its speed decreases until it attains a maximum height, where the velocity is zero. Then it is accelerated uniformly downwards under gravity. A spacecraft hurled at space less than the escape velocity of 40,320 kph (11.2 km/s) will go up and ultimately fall like a stone back on the earth. The impulse given to Chandrayaan-2 was just 39,240 kph — much less than the escape velocity. 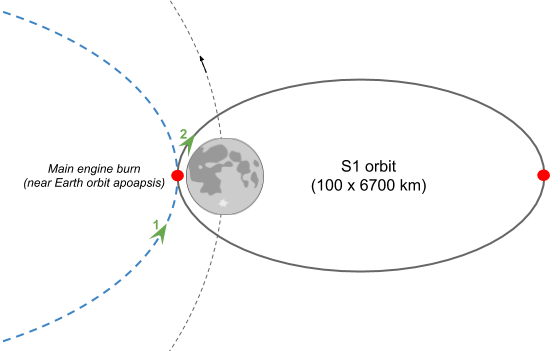 Just as the craft reaches a point near the moon, the direction and the velocity were changed to let it gently slip into the gravity well of the moon. The retro-rockets were fired and the speed was reduced from 8,640 kph (2.4 km/s) to 7,560 kph (2.1 km/s). Further, the change in the direction was effected to place Chandrayaan-2 in the moon’s orbit.

Standing up to the Goliaths of the world

The Goliaths of the world have mighty rockets in their arsenal — Atlas V, Proton, Long March. But ISRO has just PSLV and GSLV. China’s LongMarch-9 and US’ Atlas V can take 140 tonnes to low earth orbit (LEO) while India’s ‘Bahubali’ can take only 8 tonnes. This did not deter ISRO. If you have a trick up your sleeves, even David need not be disheartened.

Former Isro chairman K Radhakrishnan once remarked that ISRO adopts modular approach which is one of the important reasons that gives it cost and schedule advantage. As the technologies are modular, taking the previous proven technology, ISRO is able to modify and update a part of it without necessarily unpacking them all. For example, when the cryogenic was to be added, the earlier model was tinkered and adopted. The next version of the GSLV aims to replace the core module with a semi-cryogenic stage. The modular approach gave Isro the cost and schedule advantage.

Frugal innovation is technological innovation, not jugaad. More from less is the central mantra of ‘frugal’ innovations. Isro’s attempt to adopt PSLV and GSLV rockets meant for placing payloads in Low Earth Orbit and GTO for deep space mission is out of the box. Isro may not have the same launching power of USA, Russia or China, but has enough brain power to come up with out-of-the-box solutions.