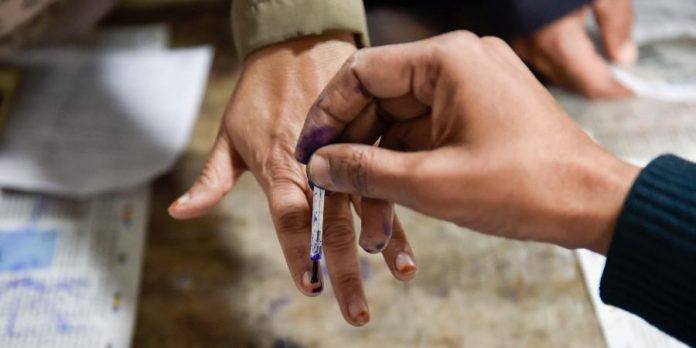 Polling in Tamil Nadu on April 6 concluded peacefully across the state barring a few technical glitches and initial hiccups. While the state recorded 72.78% voter turnout, Chennai, which is viewed as the centre of Tamil Nadu’s entire administration, registered the lowest voter participation at 59.06%.

Chennai was expected to play a vital role in this crucial 2021 Assembly Elections instead Karur district, the textile capital of TN, notched up the highest voter turnout of 83.92%. What kept the citizens of Chennai from casting their vote?

The fear of the pandemic, the soaring temperature, the inability to decide on a candidate etc., said political observers in the city. Chennai also also boasts of being the home to some of the most prominent intelligentsia of the state. However, social activists in Chennai blamed the state government’s eviction of people from the slums in the city, relocating them into another area and stripping them off their identity, as one of the major reasons behind this poor turnout.

Explaining that over the last 15 years nearly 30 lakh slum dwellers have been relocated,  well-known social activist Arul Doss said, “The city had a lot of slums, and the people living in them were the sons of the soil. But they were later side-lined as squatters and encroachers due to rapid urbanisation.”

The localities in Chennai city such as Egmore, Thousand Lights, Saidapet, Velachery, Chetput, MK Stalin Nagar, Jothi Managar, Pallavan Nagar, Kodambakkam, Puduppettai and all the way till Maduravoyal were once ostensibly filled with slums. According to Doss, between 2006 and 2020, about 1,454 government recognised slums existed.

These people were slowly evicted with the launch of development projects such as the ‘Singara Chennai’ scheme, the elevated highway project, Cooum cleaning project, Adyar restoration project, Otteri Nallah cleaning project, etc. However, some were evicted just weeks before the elections, Doss alleged.

Once a slum is chosen for eviction, the government will cut off the power, water, etc., and then the area is literally considered as a no-man’s land, the activist added.

“The voters’ names would be removed from the list. The important objective behind forming a slum clearance board in the 1970s was to build concrete houses in the places in which people used to traditionally reside. But the Slum Clearance Board has now merely become a slum eviction board,” said Doss with sarcasm.

The people who were evicted were usually moved to the city outskirts to places such as Semmencherry and Perumbakkam. However, people lack basic amenities like education, ration cards, etc., in these resettlement areas. It was naturally almost impossible to get new voter ID cards for these people as well.

Doss placed the onus of bringing these voters into the system on the Chief Electoral Officer of the state and the Election Commission of India. “They are responsible about missing voters and need to question the government about them. They should send a notice to the government demanding an explanation,” said Doss.

Activist Isaiyarasu Ambedkar too believed that slum evictions played a role in the low turnout of voters in Chennai.

According to government rules, only 250 families can live in a slum but nearly 500 to 600 families live in a slum in the city today. Giving the example of Makkis Garden, Ambedkar said that DMK chief Stalin had built 50 houses for slum dwellers at this place and it housed 500 families, when it was cleared in 2017.

In 2018, 2019 and 2020 the old slum dwellings at Pallavan Nagar, Chintadripet and Sathyavani Muthu Nagar were all demolished. When the relocated people aren’t given the basic facilities such as houses, schools, ration shops, etc., they are nothing but unrecognised citizens. “So, it is impossible to expect them to vote,” averred Ambedkar, who added that this probably led to Chennai recording the lowest voter turnout in the 2021 Assembly elections.