Tamil Nadu is one of the highest spenders on online and TV political advertising in the country, with parties relying on increasingly sophisticated methods to tell their stories.

Most campaigns – especially TV advertisements – tend to play it straight: governments highlight their policies and achievements, and promise jobs and development; opposition parties counter the regime’s claims, warn people against voting for the incumbents, and put forward their own vision for a better society.

Also read: How Dravidian parties have lost their hold over Puducherry

A recent AIADMK campaign, called ‘Vetri Nadai Podum Thamizhagam’, which translates as ‘The Victory March of Tamil Nadu’, stuck to the script. One ad hightailed the ‘achievements’ of the AIADMK under the chief ministership of Edappadi K Palaniswami, another listed the ‘hardships’ suffered by the people under past DMK governments. The ads were broadcast on all major Tamil channels, except Kalaignar TV and Jaya TV. Even Sun TV, a DMK channel, telecast the campaign.

The DMK’s reply veered into sarcastic, mocking territory, and in the process took social media by storm. The ad opens with a man complaining to a teashop owner: Businesses have been destroyed, there are no jobs, no money… Enter stage left: Politicians mockingly chanting the slogan ‘Vetri Nadai Podum Thamizhagam’.

A man doing somersaults brings up the rear. The ad closes with two actors – presumably EPS and Deputy Chief Minister O Panneerselvam – paying obeisance to a third man, standing in for Prime Minister Narendra Modi. A voiceover asks people to reject the ‘komalis’ (Tamil for ‘buffoons’, but here used in the sense of ‘slaves’) and their masters.

In internet parlance, the DMK was trolling the government.

The ad quickly went viral and was shared widely on social media channels and messaging platforms.

While the AIADMK ad was made in-house, by the party’s IT cell, the DMK’s ad was made by CS Amudhan, who is known for his spoof films.

“There is no major anti-incumbency wave against the AIADMK,” Aspire Swaminathan, head of AIADMK’ IT wing, told The Federal.

“Until recently, people were thinking DMK would win the election. There is only one reason for that: The AIADMK has been in power for 10 years. There is no other reason. People are saying, ‘It is going well.’ We wanted to tap into that feeling.”

Also read: In a first in TN, an Arunthathiyars’ party locks horns with a Dravidian major

The IT cell has its own creative team, which handles such campaigns, Swaminathan said. “Our party was the first [in Tamil Nadu] to have a social media presence and a dedicated IT wing. Our Amma [J Jayalalithaa] was able to envision that in future, the youth will be influenced by social media. So she wanted to use social media in a productive way. That tradition continues.”

Aravindan, a Chennai-based social media expert who worked in the advertisement industry for many years, said that in such campaigns, ideas, not ideologies or personalities, rein supreme. 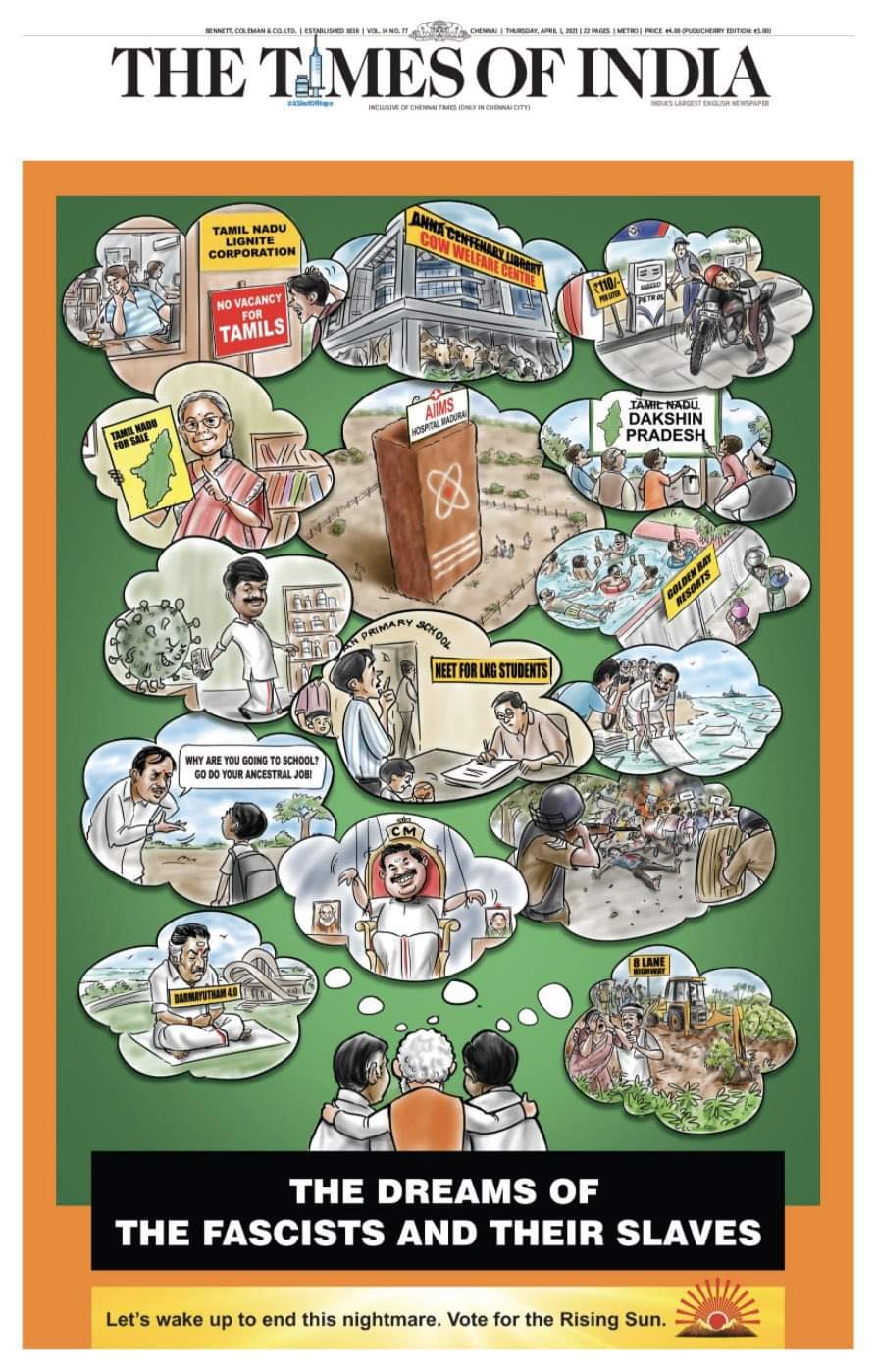 “The AIADMK campaign never focused on a single person – say Edappadi K Palaniswami. It included everyone. That’s why they used the word ‘Thamizhagam’. That kind of inclusivity goes down well,” he said.

“The DMK’s campaign had an element of humour. That is why it was received well.”

Yuvakrishna, an adman-turned-journalist said the ads will not have a great impact on the result.

“Sixty per cent of the voters have already decided. They are traditional voters who are affiliated to various parties. These campaigns are created to appeal to the swing voters,” he said.