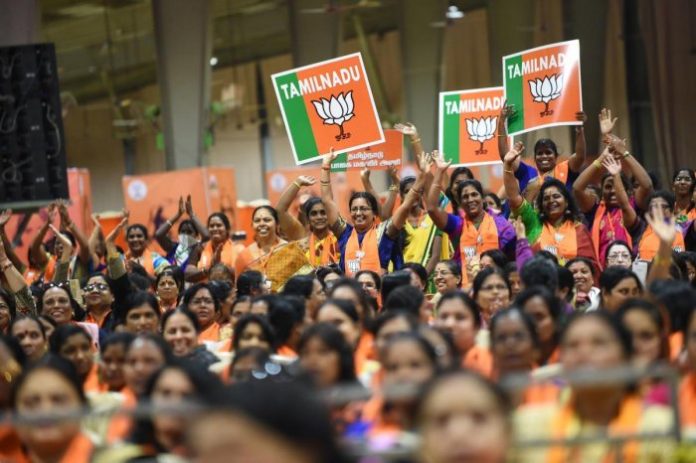 By winning four seats in this 2021 Assembly elections, the BJP may have achieved its goal of gaining a foothold in Tamil Nadu. However, its vote share has not improved when compared to the last state election in 2016; it has, in fact, marginally dropped.

The Tamil Nadu unit of the BJP, which had tied up with the AIADMK to contest in 20 seats, has managed to pull off a victory in four constituencies, Modakurichi, Nagercoil, Tirunelveli and Coimbatore south. This enables BJP’s return to the TN Assembly after a 20-year hiatus since they had last won four seats in 2001 in alliance with the DMK.

BJP leaders like Dr C Saraswathi, MR Gandhi, Nainar Nagendran and Vanathi Srinivasan were the ones who romped home in this Assembly election, while other prominent faces in the party faced a drubbing. H Raja, L Murugan, K Annamalai and Khushboo Sundar (the latter had switched over from the Congress to the BJP before the elections) failed to impress the voters and lost the elections.

Though the BJP has performed better when it comes to the number of seats as compared to its results in the 2016 election, the party’s vote share is not encouraging, said a News Minute report.

According to ECI data, the BJP’s vote share in the Assembly polls of 2021 is 2.6 per cent, a marginal decrease when compared to the vote share it had garnered in the 2016 election. In 2016, the party had teamed up with Indhiya Jananayaga Katchi (IJK) and had contested 188 seats and failed to win even one seat. However, they had notched up a vote share of 2.84 per cent in Tamil Nadu, lower than the Congress’ vote share of 6.42 per cent.

However, the party had contested only 20 seats this time, unlike the 188 seats in 2016 and managed to garner a vote share of 2.6 per cent in those. And, BJP had tied its fortunes with AIADMK this time, which was seeking a third consecutive shot at the government. But, despite hitching its bandwagon to a major Dravidian party, the national party’s vote share did not increase. The vote share of the Congress (part of the winning DMK alliance) meanwhile too has dropped to 4.26 per cent in this election.

In Modakurichi and Nagercoil, the BJP leaders, Dr C Saraswathi and MR Gandhi respectively, managed to defeat their DMK opponents. Dr Saraswathi won by a large margin of 77,653 votes in Modakurichi, while in Tirunelveli, Nainar Nagendran too won with a margin of 23,402 votes over his DMK rival ALS Lakshmanan.

It was a nail-biting contest for BJP’s Women’s Wing President Vanathi Srinivasan however, who managed to scrape through in the Coimbatore South constituency with a thin margin of 1,540 votes. BJP senior leader, H Raja lost by a margin of almost 20,000 votes, while Khushboo lost her chance to sport saffron in the TN Assembly with a wide margin of 32,200 votes.

The national party has been trying to get a foothold into the Dravidian heartland after the demise of former chief ministers J Jayalalithaa in December 2016 and M Karunanidhi in August 2018. The party had mobilised more than 40,000 booth-level committees, pumping infrastructure projects to gain a foothold in TN.

Star attractions like BJP leaders, Home Minister Amit Shah and PM Modi, had addressed a number of public rallies in the state. They were followed by a stream of high-level leaders from the BJP, including Union Minister Smriti Irani and BJP Chief JP Nadda, Bengaluru South MP, who had campaigned for the party here.

But like a DMK leader said that the BJP with the Hindutva ideology stands for “everything which we do not want TN to become”. However, this modest win in this election will probably embolden BJP to try harder to become a dominant force in the state by 2026.