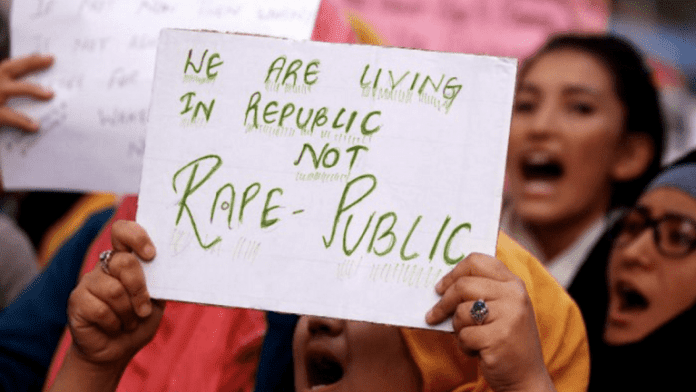 The assault on a 15-year-old differently-abled girl has taken a political hue with the BJP slamming Congress leader Priyanka Gandhi for not taking up the case . Representational PTI pic of students protesting against rape cases

In a surprising turn of events, the Alwar Superintendent of Police (SP), Tejaswini Gautam, told the media on Saturday (January 15) that the 15-year-old differently-abled girl, who was found profusely bleeding from her private parts in a culvert in the city two days ago, has not been raped.

After this severely injured girl was found and rushed to a hospital in Jaipur, where surgeons operated on her for three hours, the entire issue took on a political hue, as the BJP slammed Congress leader Priyanka Gandhi for not visiting the victim even as she used a pro-woman plank for the upcoming UP elections.

BJP leader Manjinder Singh Sirsa, who had visited the hospital where the girl was admitted, said the doctors had told him that case was similar to what had happened to ‘Nirbhaya’ (the 2012 Delhi gangrape victim). The “barbarians” had committed the same atrocity with her, he said, criticising the police for not apprehending the persons behind the assault.

The SP, however, claimed today that though the girl had injuries in her private parts, medical experts have told her at JK Lon hospital in Jaipur that the minor girl has not been raped. She shared this critical information with the media on the basis of reports from forensic, medical and technical experts, she said, adding that they were trying to investigate the cause of her injuries.

Tejaswini Gautam told reporters that an expert panel including doctors who performed surgery on the girl, as well as paediatricians, medical jurists, forensic medicine experts, and gynaecologists, had submitted a report on the nature of injuries. The doctors have said that the vagina and hymen are intact, the anus is also intact, and the injuries are not suggestive of any kind of penetrative assault, said an Indian Express report quoting the SP.

However, the police was trying to find out how she was injured at the culvert, she said. Further, the SP said that the girl was seen walking alone on the streets after she arrived in the city from her village in an auto. The auto driver has been traced but there was no trace of any sexual assault after forensics had examined the autorickshaw.

Also, no one was seen with her while she went into the culvert. This information was culled after the police went through 300 CCTV cameras. But what happened to her inside the culvert in the next 10 minutes which left her in such a severely injured state is a mystery, according to the SP.

Two days ago, the deaf and mute girl, who had left her home in the village in an auto without her family’s knowledge, was discovered lying on a bridge in Alwar bleeding profusely near her private parts. She was rushed to a hospital in a critical condition and the doctors performed a surgery on her for around three hours.

The Alwar police has lodged a case under the POCSO Act and the IPC Section for rape and a SIT inquiry has been set up. Meanwhile, the BJP attacked the SP for making the statement that the girl was not raped even before the SIT inquiry report had been submittted.