The Maharashtra government’s decision to resume liquor sale in the midst of a pandemic lockdown courted widespread criticism, though the backlash hardly mattered to the consumers who thronged the outlets in large numbers after months of ‘dry days’.

This move helped around 15,000 licensed liquor sellers, and about a lakh individuals regain employment, said the state government in its official statement. Currently, there are 7,933 licensed retail outlets in the state.

The ‘Aaple Sarkar’ online portal had received 1.43 lakh applications for liquor consumption licences between March 24, when the lockdown was announced, and July 10, while 1.38 lakh such licences were issued during the said period.

Liquor licences are mandatory in the state, two categories of which can be procured by the consumers: annual and lifetime. While the annual licence is issued for a ₹100 fee, the one for lifetime costs ₹1,000. Consumers can apply online or get it from the district revenue office. The mandatory permit explains the surge in applications during this period.

One of the licence-holders said that law enforcement has become stricter these days. “The cops have started checking after the lockdown and I don’t want to get into any trouble for carrying or consuming liquor,” he explained the sudden need of having a licence issued. 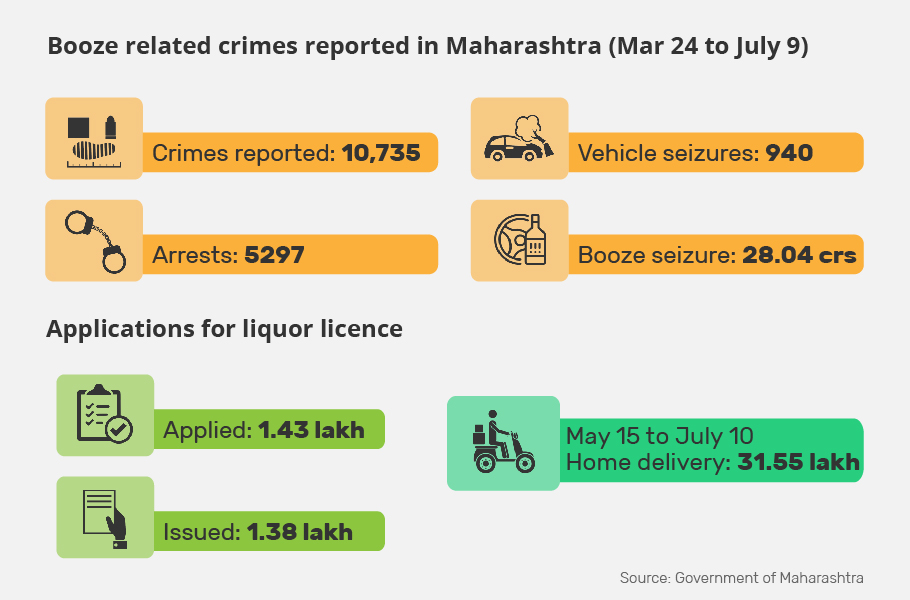 Related news: When liquor withdrawal in lockdown pushes tipplers to the edge

Rishab Agarwal, who manages a liquor outlet in Pune, told The Federal, “We do not ask for such licences. We provide a licence to carry the booze, while consumption is the customers’ responsibility.”

Liquor shops in Maharashtra issue two kinds of booze-carrying licenses: one, for exported foreign liquor and Indian Made Foreign Liquor (IMFL), which costs ₹5, and two, for country liquor that costs ₹2 per day per person.

“Liquor shops witnessed unprecedented business as people had been desperate to buy booze during the lockdown period,” said Agarwal, adding that counter sale peaked, more than home delivery, during the ‘unlock’ phase, unlike any normal day.

Though the government has permitted retail sale as well as home delivery of liquor during the ‘unlock’ phase, a considerable rise in bootlegging has prompted quick action from the law enforcement agencies. Huge quantities of liquor have been seized on account of illegal manufacturing and transportation during this time.

The state revenue department has reported a total of 10,735 liquor-related crimes between March 24 and July 9. During this period, the department seized liquor worth more than ₹28 crore and about 940 vehicles as well, while 5,297 people were arrested in this connection.

When a vibrant Kashmir is painted in radical colours

Amazon, BigBasket get nod for liquor delivery in West Bengal